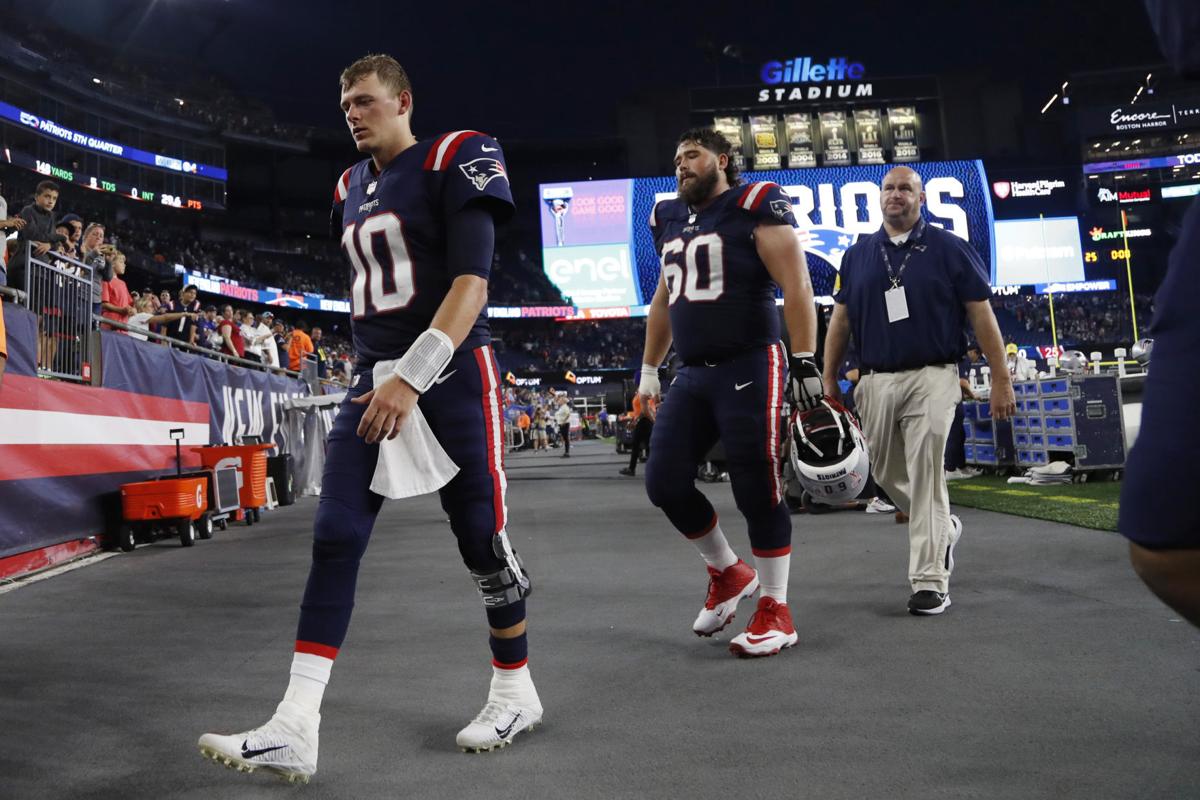 New England Patriots quarterback Mac Jones (10) walks off the field with center David Andrews (60) after a 17-16 loss to the Miami Dolphins after an NFL football game, Sunday, Sept. 12, 2021, in Foxborough, Mass. 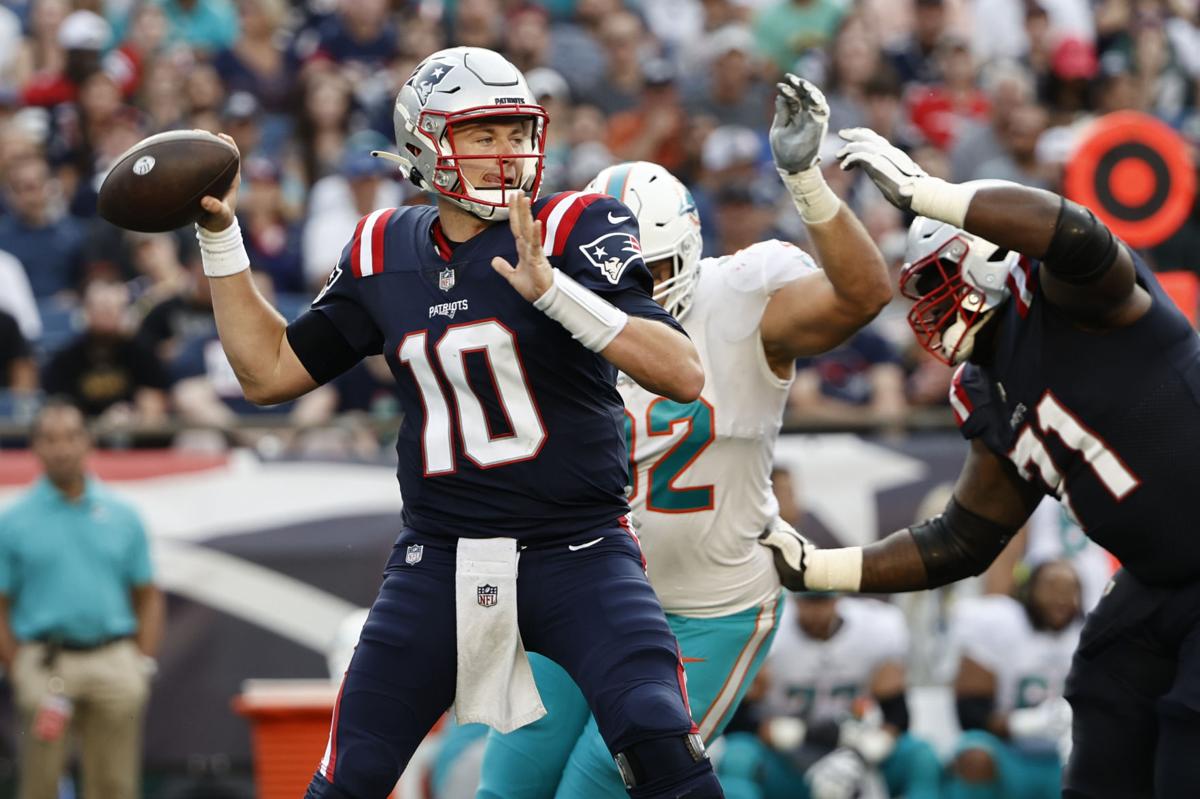 New England Patriots quarterback Mac Jones (10) looks to pass during the first half of an NFL football game against the Miami Dolphins, Sunday, Sept. 12, 2021, in Foxborough, Mass.

New England Patriots quarterback Mac Jones (10) walks off the field with center David Andrews (60) after a 17-16 loss to the Miami Dolphins after an NFL football game, Sunday, Sept. 12, 2021, in Foxborough, Mass.

New England Patriots quarterback Mac Jones (10) looks to pass during the first half of an NFL football game against the Miami Dolphins, Sunday, Sept. 12, 2021, in Foxborough, Mass.

FOXBOROUGH, Mass. — Xavien Howard was one of the NFL’s best players at causing turnovers in 2020. He was back at it Sunday to help the Dolphins preserve a victory to open this season.

“Every game I feel like I have to make something happen for the team and give the ball to the offense. My mindset was get the ball out,” said Howard, who led the league in interceptions in 2020. “We needed it and it was crucial. So I made it happen.”

Tua Tagovailoa threw a go-ahead touchdown pass to Jaylen Waddle in the third quarter and Howard recovered the Damien Harris fumble with New England driving in the fourth to help the Miami Dolphins hold on for a 17-16 win over the Patriots on Sunday.

It was Miami’s second straight win over the Patriots. Tagovailoa also led the Dolphins to a victory in the second meeting between the teams last season.

Tagovailoa finished 16 of 27 for 202 yards, a touchdown and one interception, and also had a 3-yard TD run to lead a revamped offense that kept the Patriots' rebuilt defense guessing, mixing in no-huddle and empty backfield formations. DeVante Parker caught four passes for 81 yards.

While the offense had its moments, including going 2 for 2 in the red zone, Tagovailoa said it must be better than 4 of 11 (36%) on third downs.

“I think the defense gave us a lot of opportunities and we just gotta make use of those,” Tagovailoa said.

Miami’s win spoiled the debut of New England's Mac Jones, the first rookie quarterback to start for the Patriots since Drew Bledsoe in 1993.

Jones didn’t want to save the football from his first career NFL touchdown pass. He never got a second.

The New England Patriots rookie completed 29 of 39 passes for 281 yards and a TD on Sunday in his NFL debut. He was driving the Patriots to a potential go-ahead score in the final four minutes when Damien Harris fumbled at the Miami 9, and the Dolphins held on for the 17-16 victory.

“It starts with me,” a downcast Jones told reporters afterward. “It doesn’t go all on Damien. There’s a lot of things I could have done to be better, to not even be in that situation, take some bigger chunk plays.”

A first-round draft pick after leading Alabama to the 2020 national championship, Jones was elevated to the Patriots’ No. 1 QB when 2015 NFL MVP -- and 2020 New England starter -- Cam Newton was cut at the end of training camp.

That made Jones the first rookie start the season opener at quarterback for the Patriots since No. 1 overall pick Drew Bledsoe in 1993. More importantly, it left Jones with the responsibility of leading the six-time Super Bowl champions back to prominence after a fiasco of a first season without Tom Brady.

“But that’s not how I wanted the day to go,” Jones said.

“Definitely wasn’t good enough, starting with me,” he added. “We lost, so it’s not good enough.”

Miami took a 17-10 lead in the third quarter on a 3-yard touchdown from Tagovailoa to Waddle.

The Patriots cut it to 17-13 in the fourth when they ate up more than five minutes of the clock to drive inside the Dolphins 15. But it stalled there and Nick Folk’s third field goal made it 17-16 with 10:36 left.

On their ensuing drive, the Dolphins were facing third-and-7 on their 43 when Tagovailoa was flushed out of the pocket and heaved a pass toward the sideline. The ball was tipped and intercepted by Jonathan Jones, giving the ball back to the Patriots at midfield with just over eight minutes remaining.

New England moved all the way to the Miami 11. But on the next play, a 2-yard run by Harris ended with him losing the ball on a hit by Howard. Howard recovered it and the Dolphins took over on their 9. They were able to run out the clock.

Tagovailoa completed several deep passes on the Patriots secondary, taking advantage of the absence of cornerback Stephon Gilmore. The 2019 NFL Defensive Player of Year started the season on the physically unable to perform list and will miss at least the first six games.

Jones was efficient for most of the game, spreading the ball to multiple receivers and finding soft spots in the Miami defense for chunk plays. Penalties hurt the Patriots, though, negating big gains and forcing the offense to settle for field goals.

Dolphins DT Raekwon Davis limped off early in the first quarter with a knee injury.

Backup quarterback Jacoby Brissett made two big appearances Sunday. He picked up a third-and-1 in the second quarter to keep a drive alive and set up a field goal. He then did it again on Miami's final drive of the day to help the Dolphins run out the clock.

“He’s done it before in the past. We used it today and he helped us," Flores said.

Harris led the Patriots with three 100-yard rushing games last season and separated himself as the team's top option out of the backfield during the preseason by showing ability to break long runs and move the chains in short yardage.

After having the fourth career 100-yard effort marred by the late turnover, he said he was ready to turn the page.,

“It's just a tough play," he said. "It’s part of the game. I’m not going to let this mistake define me.”