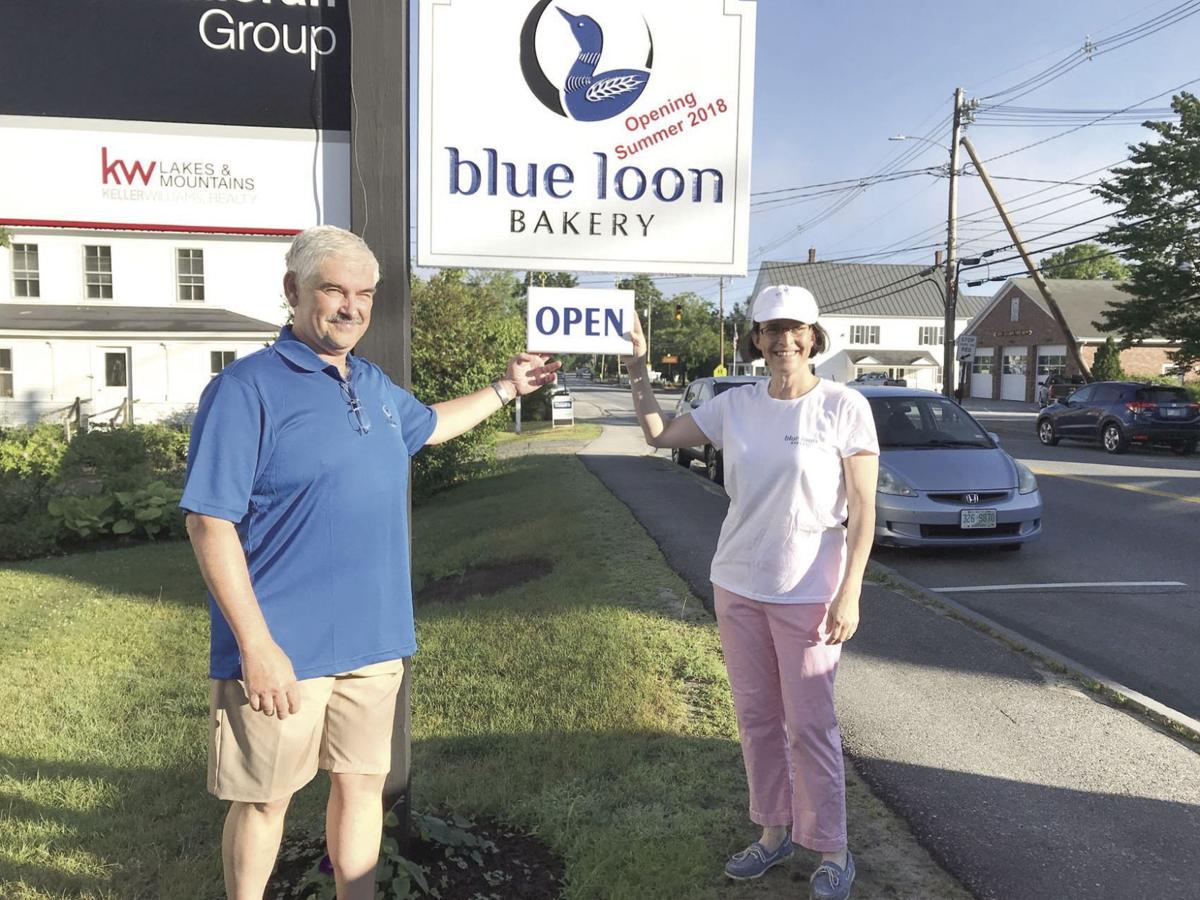 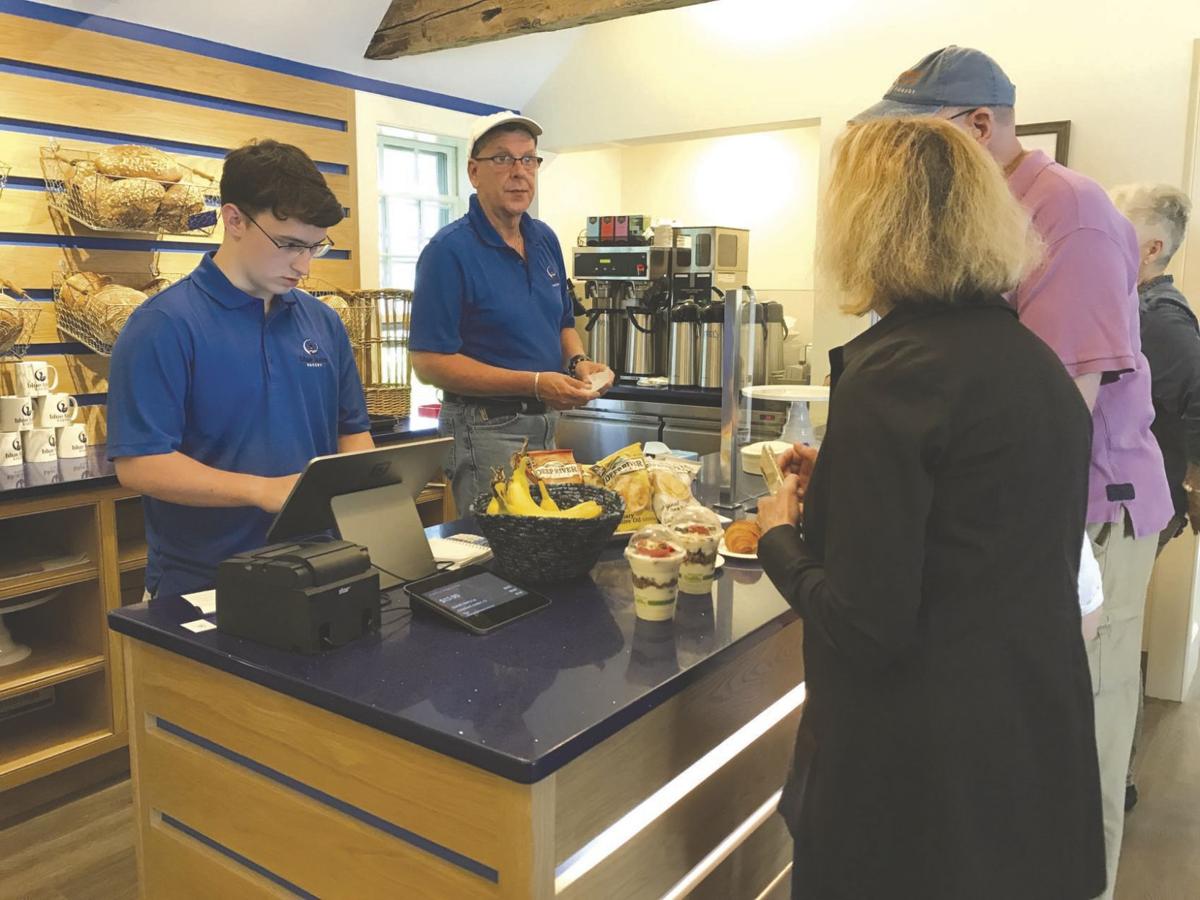 NEW LONDON — A loaf of bread is more than just a filling grain product. It occupies a unique role as a staple found in nearly every culture and an important item in countless social and cultural traditions.

And for Laurie Schive and Mike Morgan, bread holds the potential to breathe life into a town. They founded Blue Loon Bakery to create traditional artisan-style breads while giving back their community.

The married couple has owned property in town for six years. When they made New London their fulltime home two years ago, Schive’s hobby for baking developed into a full-fledged passion.

Located on the corner of Main Street and Lovering Lane, Blue Loon celebrated its grand opening on Friday, June 29. Hungry customers lined up outside before Schive and Morgan opened the doors.

“I think it’s so exciting to have a local bakery in town,” said Betsy Tine while waiting in line on Friday. “I’m thrilled that Blue Loon is here.”

Jams from Blake Hill Preserves and Lidrivio olive oil are also for sale.

The breads are made from scratch — with locally sourced ingredients such as Vermont Creamery cultured butter and Schroeder Farm eggs — in the bakery’s kitchen that includes a steam-injected deck oven.

Customers can see Schive or one of her employees at work through a viewing window that looks into the kitchen. Blue Loon employees eight staff members.

Before the grand opening, Laurie was introducing the community to Blue Loon through donations and samplings at different community events like Center for the Arts’ Dancing with the Sunapee Stars and Artisan’s 10th Year Anniversary Celebration.

Now that they’re officially in business, they still plan to collaborate with other local organizations in the future.

“We really believe in partnerships,” said Morgan. “If more people do well, everyone does well.”

In fact, that idea is part of a larger philosophy that inspired Schive and Morgan to open up their bakery.

Though they retired this year from PricewaterhouseCoopers, Schive says she isn’t a “sit-on-the-dock-and-read-a-book” person. Plus, they had been talking to friends in the Lake Sunapee Region Chamber of Commerce and wanted to contribute to the town in some way.

Before joining PricewaterhouseCoopers, Schive and Morgan worked for the CIA and traveled to many parts of the world. While in Austria, Schive discovered a love of baking.

It only seemed natural to combine both those interests by opening up their own business.

The couple briefly considered opening a franchise, but quickly realized it didn’t confirm to their philosophy or fit the town. They also knew that they wanted to stay in New London.

“I pulled up the master plan for New London,” said Schive, “and it was this vision of a walk-able community with mixed use and a vibrant variety of people. And we wanted to be apart of that.”

Blue Loon is already accomplishing that goal, giving residents and visitors alike another option for breakfast and lunch.

In addition to the bread and pastries, Blue Loon sells sandwiches, salads and parfaits. Coffee from Wayfarer Coffee Roasters and ice cream pints from Sanctuary Dairy are also available.

The sandwiches — turkey and cheddar on a croissant; ham and Swiss on a French baguette; and Caprese on ciabatta — are uncomplicated so that the bread takes center stage.

That elegant simplicity is also reflected in Blue Loon’s interior design and its logo.

Within the bakery there’s six tables as well as a comfy sitting room area. Art by New London resident Kathy Lowe is displayed along with her husband Peter Bloch’s photography. Over the counter hang Bloch’s hand-turned wood lampshades.

And the logo features a blue loon looking upward. Close observation reveals that its wing is made out of a wheat stalk.

Back when Blue Loon was just an idea, Schive and Morgan asked their granddaughter Marissa what they should name the bakery. She replied, without hesitation, “blue loon,” unperturbed when they told her that blue loons don’t technically exist.

The couple’s family helped design the logo, and their four children all traveled to attend the grand opening on Friday.

Blue Loon had to close early on their first day as they sold out of everything.

Regular hours are Tuesday through Sunday from 7 a.m. to 4 p.m. To view Blue Loon’s menu or learn more, visit blueloonbakery.com