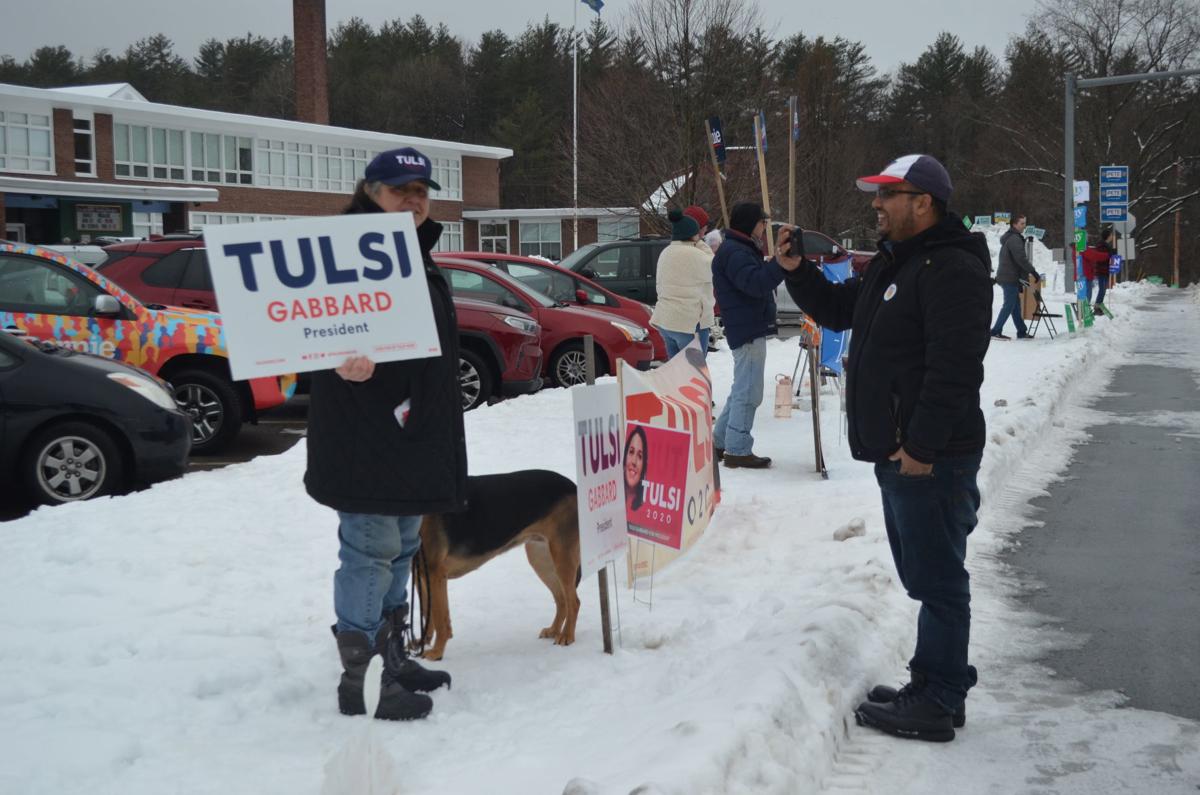 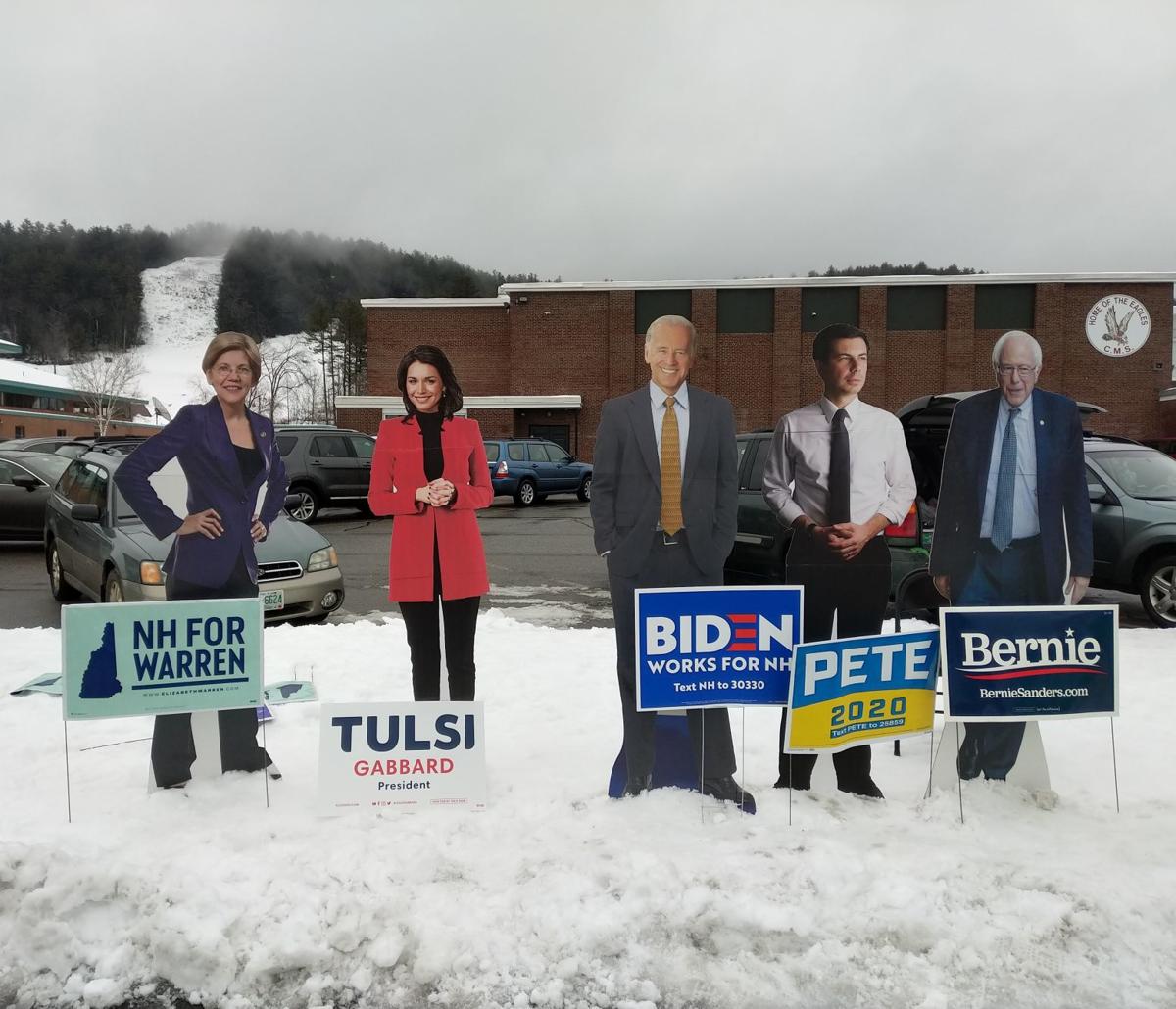 While all of the Democratic presidential hopefuls were running around New Hampshire on Tuesday afternoon, some still made an appearance outside one of the city’s three polling places through cardboard cutouts placed behind their respective campaign signs by supporters.

While all of the Democratic presidential hopefuls were running around New Hampshire on Tuesday afternoon, some still made an appearance outside one of the city’s three polling places through cardboard cutouts placed behind their respective campaign signs by supporters.

CLAREMONT — As New Hampshire Primary Day rolled into the early afternoon, the parking lot at Claremont Middle School quickly filled as Claremont voters in Wards I and II, presumably during their lunch break, came to either vote or hold campaign signs for their respective candidates.

But neither the location of campaign spots nor differing political views deterred friendly dialogue between the volunteers, as illustrated by a conversation between Prashanna Sangroula, a Biden supporter, and Joan Garuti, a backer of Gabbard.

Despite varying distinctions in outlook, Sangroula, Garuti and the other campaigners in Claremont also share common wants. The Eagle Times spoke with supporters for each campaign represented — Buttigieg, Biden, Gabbard, Minnesota Sen. Amy Klobuchar, Sanders and Massachusetts Sen. Elizabeth Warren — about what they believe are the the most important considerations in selecting a Democratic Party presidential nominee.

Interestingly, the most commonly shared priority among all the campaigners was not “to defeat Donald Trump,” but more specifically to “unite or heal the country.”

“We need someone who will be a bridge between communities of people,” Sangroula said. “I want someone who is not too far left or too far right, but in the middle.”

Like Sangroula, Claremont state Rep. John Cloutier, also a Biden supporter, emphasized the candidate’s 40 years of experience as a senator and vice president as a key factor for backing him.

“It is crucial that the next president knows what they’re doing, because there is going to be a mess to clean up,” Cloutier said.

Restoring unity will require someone like Biden who “knows how Washington works” to be effective, which requires trying to work across the isle with Republican legislators, Cloutier said. Additionally, Biden has deeper experience in world affairs necessary to restore diplomatic relationships.

Cloutier also believes that Biden is the strongest candidate to face Pres.Trump in a general election, citing Biden’s ability to build a broad voter coalition in states like Wisconsin and Pennsylvania that Hilary Clinton lost in 2016.

Sam Gleason, an 18-year-old Buttigieg supporter from Connecticut, said that the Democratic nominee must heal the division in America, not simply defeat Trump.

“We need an administration who will bring the kind of change to make sure that another Trump doesn’t happen again,” Gleason said.

Buttigieg’s emphasis on moral values like respect, belonging and teamwork, as outlined in his “rules of the road” campaign message, are as effective tools to bridge divides with others as Buttigieg’s policies.

Gleason recalled a recent canvassing outing where he met some Trump supporters. By respecting his audience as people with differing opinions, Gleason and the Trump voters had a productive conversation that lasted over 20 minutes.

“[At the end] they said they didn’t necessarily agree with Buttigieg’s policies, but they respected where he was coming from,” Gleason said. “And they said they would consider voting for him if he was elected in November.”

Claremont resident Ernesto Montenegro, a Sanders supporter, called this “the most important election in the history of this country” and that beating Trump, whoever the nominee is, would be “one of the best” outcomes.

But Montenegro also stressed the need for a progressive champion, someone who is honest and dedicated to putting the needs of the American people first.

“[Sanders] will attempt to do what he says he intends to do,” Montenegro said. “Whether he can get a lot of it done or not, he will make that attempt.”

Montenegro and fellow Sanders supporter Stephen Brown, from Grafton, said that the mainstream Democratic Party has shifted too closely in ideology and corporate ties to the Republican Party, to the point that candidates like Biden and Bloomberg could just as feasibly run on the Republican ticket.

Brown said his top three priorities behind backing Sanders are Medicare for All, saving the planet and housing.

Brown is still recovering from lymphatic cancer, nearly two years after a surgery in which he had 22 lymph nodes removed, 11 of which were cancerous.

“Medicare for All has been done in other countries, it’s been done before, is a freedom for everybody,” Montenegro said. “So many people have jobs because of their insurance. But good insurance isn’t even that good anymore because they have deductibles.”

Brown said that Sanders would do well in a general election, citing Sanders strong likability among independent voters and libertarians.

Garuti identified “ending the endless wars and stopping the bickering between the parties” as her two top reasons for supporting Gabbard.

“Gabbard has a demeanor that is very loving, respectful and peaceful,” Garuti said. “She has a way of being able to talk to everybody. When we go to see her talk, there are Republicans, libertarians and Democrats there. She really has a way of bringing people together.”

Gabbard’s stance America’s militarization also resonates strongly with Garuti, whose son served the military in the Iraq War, where he had been stationed at the Guantanamo Bay detention camp GITMO.

Claremont resident Lisa Campbell, holding signs in support for Warren on Tuesday, said that she didn’t want to tell other people what to think.

“People who are voting have different opinions,” Campbell said. “I don’t want to say what other people should do. This is the experiment in a democracy.”

Campbell, speaking for herself, said she wanted a candidate who was smart, fiscally responsible, an advocate for teachers and a woman.

While talking to Campbell, another Claremont resident stopped to thank Campbell for helping her decide to vote for Warren. The resident said that she came to the polling station still undecided, but her conversation with Campbell helped seal her decision.

Campbell said she won’t be upset if Warren isn’t the nominee, because she will give her full support to whoever is the party candidate.