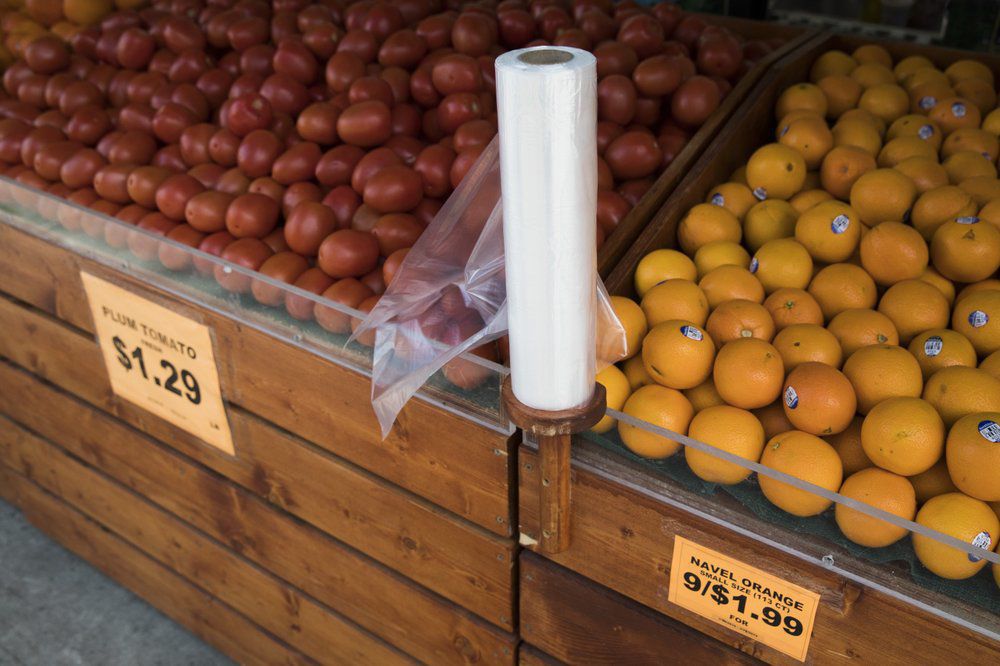 Oranges and tomatoes are seen on display for sale alongside a roll of plastic bags. Last week, Claremont resident Kate McNamee started a petition to ban single-use plastic bags throughout the city in an effort to create a sustainable future for generations to come. 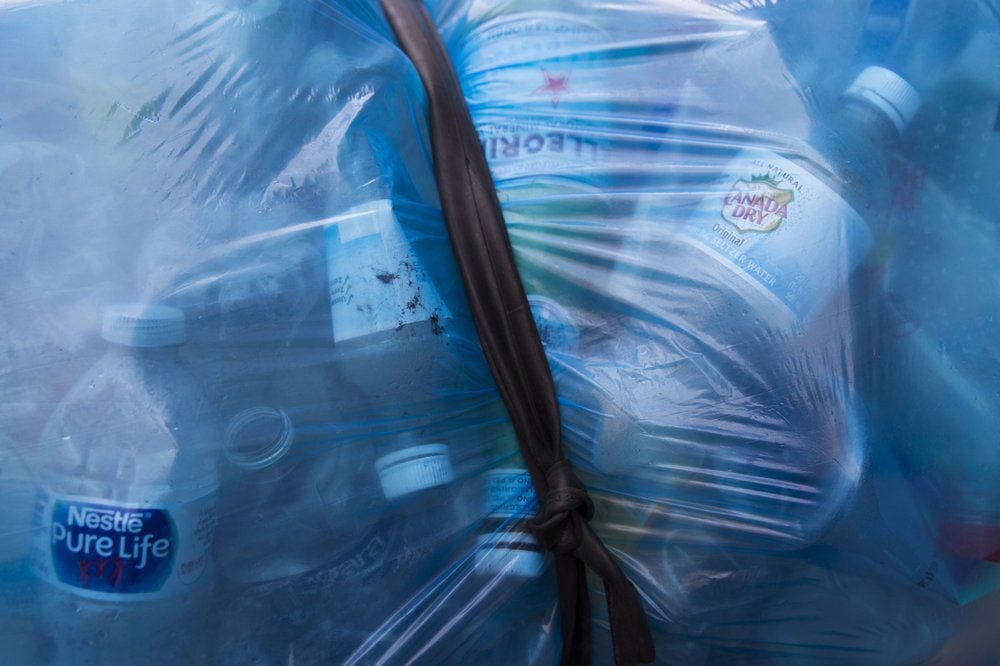 In this March 27, 2019 photo, plastic water bottles are seen bundled up in a plastic bag belonging to a person who collect bottles for the refund. A petition created by a city residents looks to reduce the amount of single-use plastics.

Oranges and tomatoes are seen on display for sale alongside a roll of plastic bags. Last week, Claremont resident Kate McNamee started a petition to ban single-use plastic bags throughout the city in an effort to create a sustainable future for generations to come.

In this March 27, 2019 photo, plastic water bottles are seen bundled up in a plastic bag belonging to a person who collect bottles for the refund. A petition created by a city residents looks to reduce the amount of single-use plastics.

CLAREMONT — With the recent passage of two state bills to ban single-use plastic bags, a petition has started in Claremont to get the city council behind supporting a ban locally.

Claremont resident Kate McNamee, 62, has more than 100 signatures so far on a petition in support of banning single-use plastic bags in the city, an effort that will “reduce needless waste in landfills and help save the planet,” according to the request.

McNamee, who moved to Claremont two years ago with her husband, Thomas McNamee, to be closer to their ailing grandson, said this is her first time doing an online petition. Her concern about leaving a healthy environment for the next generation drove her to act ultimately led to the petition’s creation.

“I think it’s important to look at the world we’re going to leave them,” McNamee told the Eagle Times on Wednesday. “I want to leave the world in good or better condition for our children and grandchildren than when we inherited it.”

Last month in Concord, the House of Representatives passed H.B. 102, which would give New Hampshire municipalities the power to locally regulate the distribution of single-use plastics to consumers. The House also voted 205-158 to pass H.B. 559, a bill that would ban single-use plastic bags statewide and require businesses to charge customers 10 cents per reusable bag up to a maximum of 50 cents per visit.

Whether these bills will survive the state Senate and a governor veto is unclear, but McNamee said that the debate remains ongoing in the state, elaborating that she would like Claremont officials and delegates to take a leadership role.

“This is a new type of project for me,” McNamee said. “I felt we have to do something for our city and our environment, that I can’t sit by and do nothing. And one way to do it is locally.”

The world produces 300 million tons of plastic each year, half of which is for single-use items, according to the National Resources Defense Council. Over 90% of disposed plastic, even plastic intended for recycling, ends up in landfills and the environment. Over time, the sun and heat slowly turn these plastics into smaller and smaller particles, where their chemical components can contaminate soil, waterways and the food chain.

While seeking to do away with single-use plastics, McNamee is also pragmatic about how to implement change.

“We can’t just come out and end single-use bags overnight,” she said. “There needs to be more discussion, and involve something phased in over a one- or two-year period.”

McNamee recognizes that the transition to reusable bags could pose financial challenges to low-income families and the elderly living on fixed incomes. Though, she hopes that the city could build partnerships with local businesses, and the state and federal funding be made available, so the cost for people on limited income to acquire reusable bags “won’t come out of pocket.”

Once her petition has 200 local signatures, McNamee plans to get the petition on the city council’s agenda for a discussion. She aims to notify all the petition signers of that meeting in hopes that a number of supporters will attend.

Being new to online petitions, however, McNamee has also learned from novice mistakes. Because her petition didn’t stress that signers need to shop locally in Claremont, some portion of signatures are from people living in other parts of the country. While her petition is already well over the 200 signature mark, she won’t know how many local signers she has until she combs through the list and culls the ineligible ones.

While I agree we need far better management of single use plastic, banning bags creates a whole new cluster of environmental issues.

"Denmark’s Ministry of Environment and Food found that you would need to reuse a paper bag at least 43 times for its per-use environmental impacts to be equal to or less than that of a typical disposable plastic bag used one time. An organic cotton bag must be reused 20,000 times to produce less of an environmental impact than a single-use plastic bag. "

Single use plastic bags are a non-renewable petroleum based product so that in itself makes no sense in continuing their use. If we can recycle existing waste into other products like shopping bags, we are already ahead of the game keeping them out of landfills. Thank you for your thoughts!