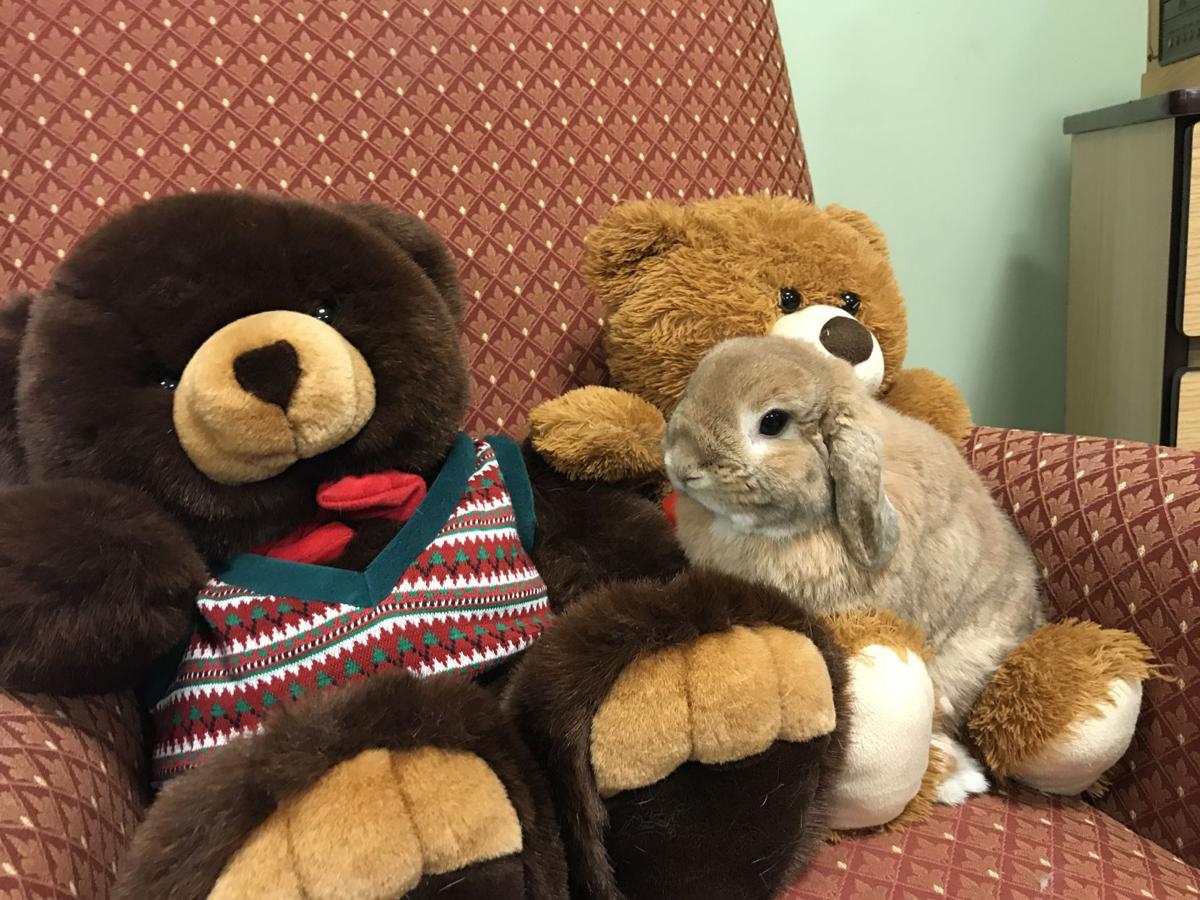 Meet Cinnabun, a therapy rabbit who is as sweet as his name! This 5-year-old male Holland Lop is one of three bundles of fur bringing delight to the residents and staff at Sullivan County Health Care. Here’s Cinnabun with a few of his less animated but just as cuddly buddies. 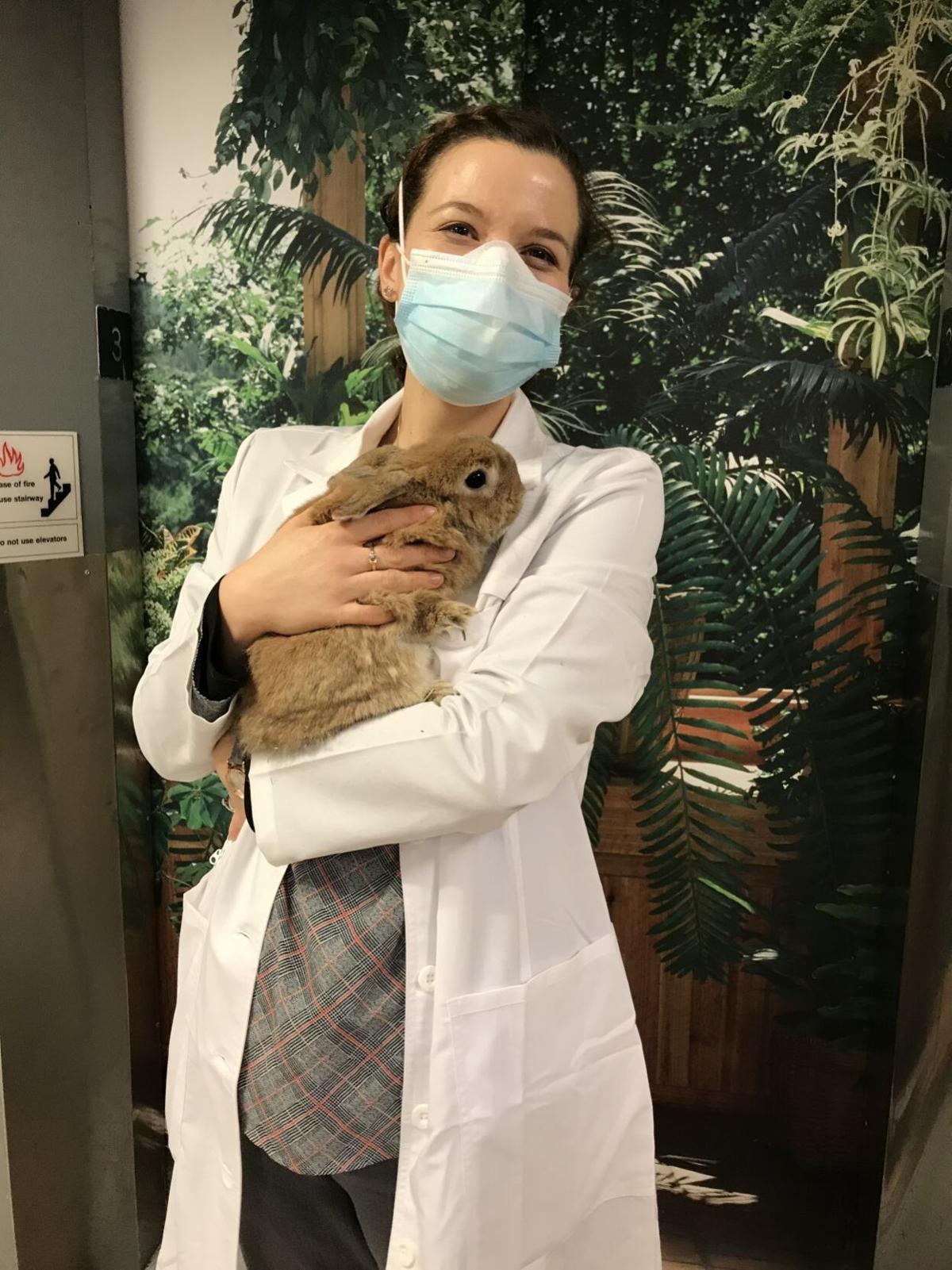 Meet Cinnabun, a therapy rabbit that is as sweet as his name! This 5-year-old male Holland Lop is one of three bundles of fur bringing delight to the residents and staff at Sullivan County Health Care.

Meet Cinnabun, a therapy rabbit who is as sweet as his name! This 5-year-old male Holland Lop is one of three bundles of fur bringing delight to the residents and staff at Sullivan County Health Care. Here’s Cinnabun with a few of his less animated but just as cuddly buddies.

Meet Cinnabun, a therapy rabbit that is as sweet as his name! This 5-year-old male Holland Lop is one of three bundles of fur bringing delight to the residents and staff at Sullivan County Health Care.

At the Sullivan County nursing home, those little things include a trio of resident rabbits who are demonstrating that a boon of happiness and ease can derive from small and unassuming sources.

“Small town bunny makes good,” said Activities Aide Rich Vanderweit of Cinnabun, a 5-year-old male Holland Lop who is as sweet as his name. Cinnabun came to the nursing home three years ago as a “therapy rabbit.”

Shirley’s companion Laverne, a giant breed known as a Flemish, was too large for the basket and remained at the pen, Klebes said.

Rabbit owners probably would not be surprised by the notion of therapy rabbits. Rabbits are intelligent and highly social animals that bond easily with people, typically crave affection and are relatively low maintenance.

While spending much of their time in a hutch or contained area, rabbits also enjoy opportunities to freely roam a room, though supervision is always advised.

Vanderweit said he has learned to keep a small leash and harness on Cinnabun when allowing the rabbit to stretch his legs due to Cinnabun’s mischievous habit of playing keep-away by diving under furniture.

“Rabbits have a sense of humor,” Vanderweit said. “He will go under the table at one end, wait for me to get on my hands and knees to crawl under, and then go out the other end. It amuses the residents too.”

Cinnabun originally belonged to Klebes’ daughter, who donated the rabbit to the nursing home to ensure he had more attention.

Kevin Clark, lead carpenter for Sullivan County, constructed a deluxe play yard, along with a raised hutch, for Laverne and Shirley in the first floor common area of the Stearns unit, where residents can enjoy watching the rabbits.

“It was a fun project,” Clark said, who constructed Laverne and Shirley’s home. “Everybody seems to like it. The rabbits certainly like it.”

Clark, a carpenter with 45 years of experience, said the only initial design challenge had been the ramp from the floor to the hutch, which the rabbits were reluctant to climb. Clark eventually found the solution by covering the ramp with a tented dome, which appealed to the rabbits’ innate attraction to tunnels and hiding spaces.

Clark also designed a hutch for Cinnabun, which would constitute a luxury home by rabbit standards, albeit without the pen enclosure enjoyed by the two females.

Cinnabun was a vital therapeutic resource during much of the pandemic when the facility had to suspend outside visitations and activities, according to Vanderweit.

“Cinnabun helped get us through COVID when it was at its worst,” Vanderweit said. “We had no therapy animals come in.”

The nursing home has a resident cat and currently one finch. Prior to the pandemic local volunteers used to bring their certified therapy dogs to visit the nursing home.

“That touch from petting an animal, or just seeing an animal, is so good for us,” Vanderweit said. “It releases Oxytocin, which is the same hormone that helps parents bond with their children. It’s a feel-good hormone.”

The hospital staff benefit from the animals as well, according to Vanderweit.

“I can’t take Cinnabun down the hall on the cart without staff stopping and talking to him and making very much ado,” Vanderweit said. “He’s our therapist upstairs.”

Three or four days per week, Vanderweit and Klebes take the rabbits on rounds to visit each room on their assigned ward. Vanderweit also brings Cinnabun to a common room each day for an hour, where residents can have the rabbit on their lap and pet or brush his fur.

The aides also have a “bunny bassinet” whose height can be adjusted to the level of the resident.

Cinnabun lives on the third floor of Stearns while Laverne and Shirley live on the first floor. The separation is partly for efficiency, so the aides do not have to cart the rabbits to multiple floors. In addition, Cinnabun is accustomed to his own living situation and probably would not socialize well with the newer, younger pair.

Rabbits typically prefer living with another rabbit though single rabbits can be content with ample human companionship.

Each rabbit has its own personality, the aides said.

At five years of age, Cinnabun is impressively calm and easygoing. Vanderweit said that he can place Cinnabun on a person’s shoulder if there is comfortable support and Cinnabun will be so quiet and still that the person might forget he is there.

Shirley still exhibits some of the activeness common with younger rabbits though she has settled down considerably.

Laverne only likes to do rounds when accompanied by Shirley, according to Klebes.

“They are comfortable together,” Klebes said. “They will run to each other. When you return one to the hutch, the other will come running.”

Residents also enjoy sitting by the rabbits’ space and watching them, according to Klebes.

On an interesting note, while some people mistakenly think of rabbits as a type of rodent, rabbits are actually “lagomorphs.”

The key difference between rodents and lagomorphs is a second coating of enamel around the front incisors, which rodents have but hares and rabbits do not. In addition the rodent’s enamel is orange-colored while the lagomorph’s enamel is unpigmented.