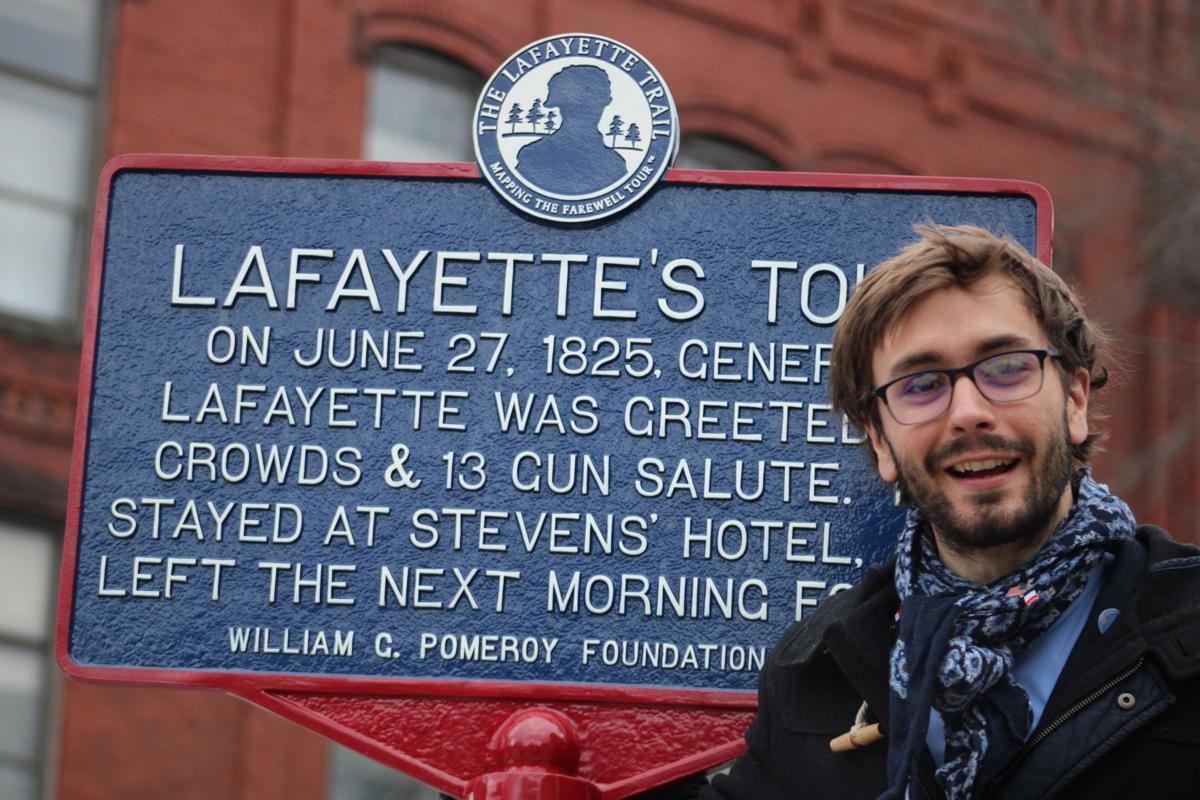 Julien P. Icher, founder of the Lafayette Trail Project, stands beside a new commemorative marker unveiled during a ceremony in Opera House Square in Claremont on Monday, Dec. 28, 2020. The red-and-blue marker celebrates French General Marie-Joseph-Paul-Yves-Roch-Gilbert du Motier, marquis de Lafayette — otherwise referred to as Marquis de Lafayette — and his visit to the city and several nearby towns in New Hampshire and Vermont between 1824 and 1825 as part of his “Farewell Tour.” 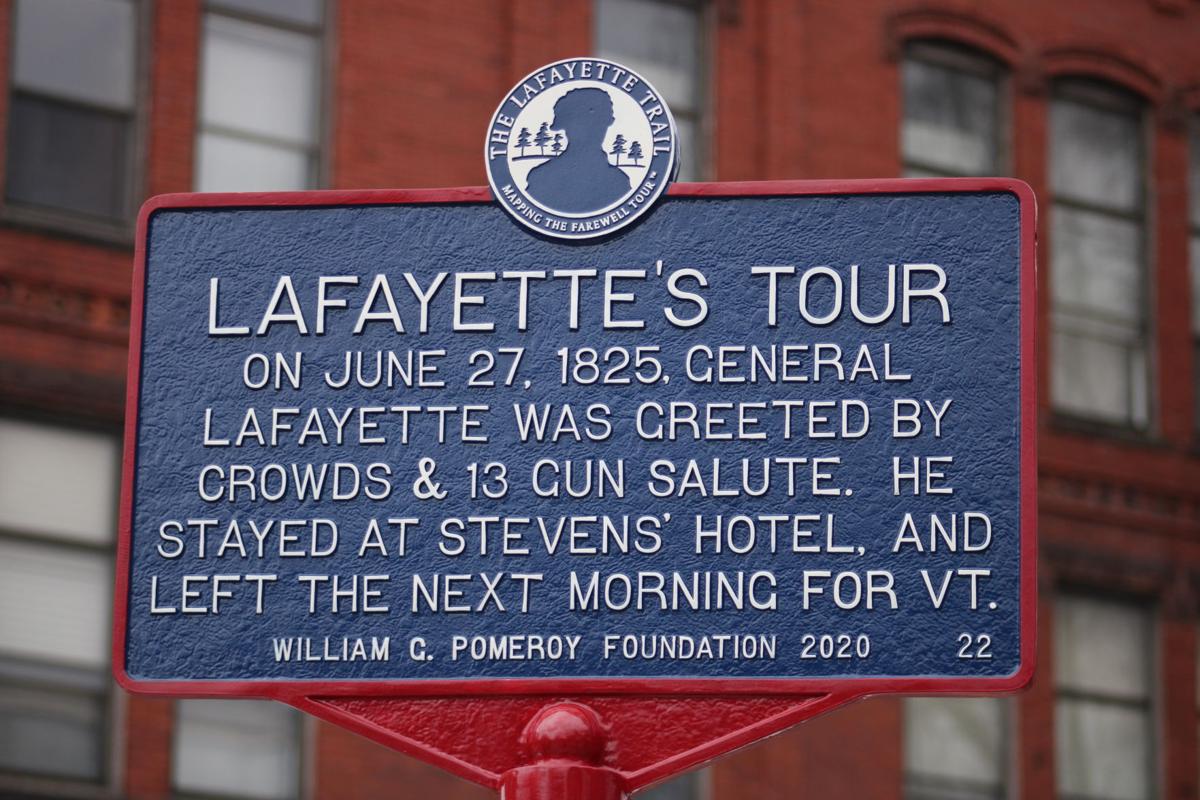 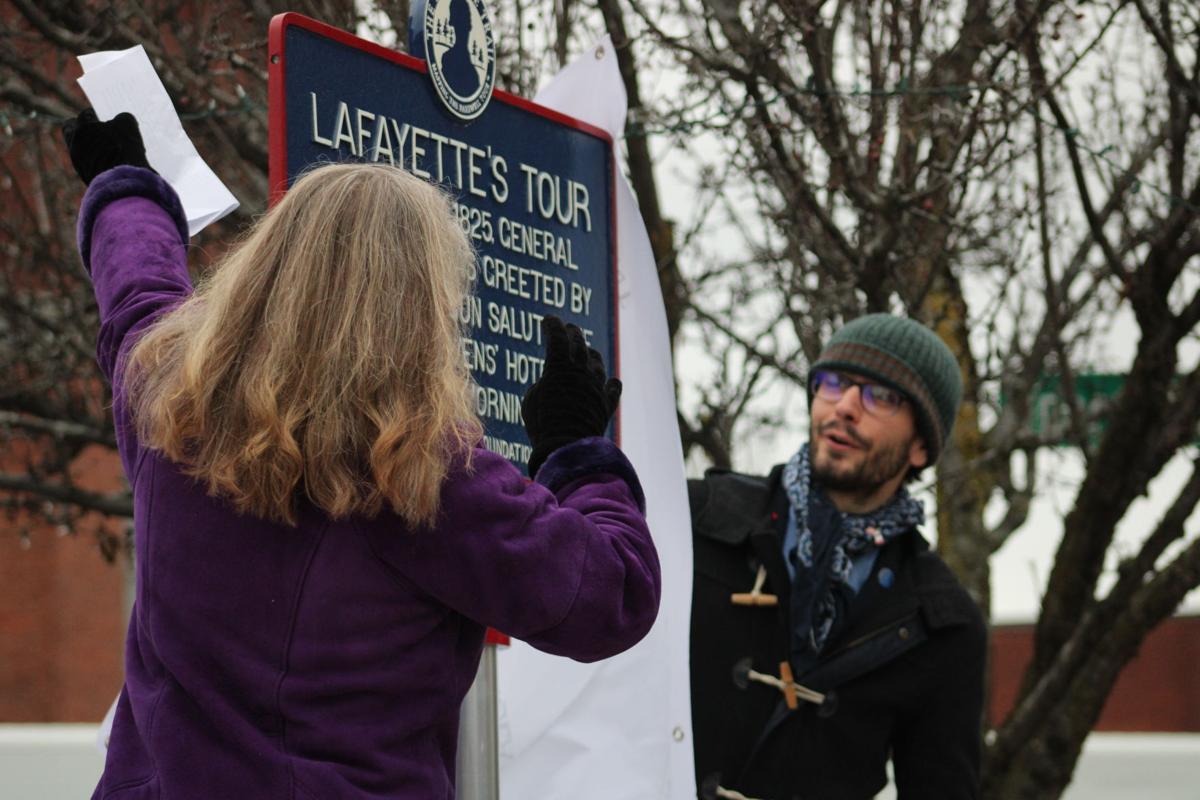 Julien P. Icher, founder of the Lafayette Trail Project, stands beside a new commemorative marker unveiled during a ceremony in Opera House Square in Claremont on Monday, Dec. 28, 2020. The red-and-blue marker celebrates French General Marie-Joseph-Paul-Yves-Roch-Gilbert du Motier, marquis de Lafayette — otherwise referred to as Marquis de Lafayette — and his visit to the city and several nearby towns in New Hampshire and Vermont between 1824 and 1825 as part of his “Farewell Tour.”

CLAREMONT — A new historical marker in downtown Claremont preserves a near-bicentennial visit while illustrating the opportunities for unity even during politically contentious times, according to local officials.

Twenty-six individuals gathered on Monday morning in Opera House Square for the unveiling of a new historical marker commemorating the visit to Claremont by Marquis de Lafayette, the celebrated French general who fought in the Continental Army with the American colonists against the British in the American Revolution, on Monday, June 27, 1825. Lafayette visited Claremont, along with several other New Hampshire and Vermont towns, during his 13-month “Farewell Tour” of 25 states between 1824 and 1825.

The marker is the third of its kind in New Hampshire, with two markers already placed in Newport and Cornish, according to Julien P. Icher, founder of the non-profit organization The Lafayette Trail Project, who is working on creating a trail of all the stops that Lafayette made during his “Farewell Tour.”

“The powerful legacy that I see in Lafayette today, [here] and in France, is the capacity to bring Americans together, to provide a common ground much like [his tour] did in 1824 and 1825,” Icher told the gathering at the marker unveiling.

This call for unity was Lafayette’s central message during his tour, which included over 170 stops across the country. The United States of America, while still in its formative years, was fast-growing and aggressively rooted in its westward expansion but also deeply embroiled in internal conflicts, particularly between the northern and south states.

The political climate in 1824 bears many similarities to today, both of which having a highly contentious presidential election, Icher noted.

“So it sounds like deja vu, but the legacy I think he left behind is very powerful today, in the sense that here we are and we can have this conversation,” Icher said.

Claremont was among the few visits in which Lafayette stayed overnight. According to Colin Sanborn, a librarian at Fiske Free in Claremont who had assisted Icher with his historical research, Lafayette had arrived at Claremont later than expected, at 11 p.m., due to a carriage breakdown during travel from Newport.

“A welcoming party had been out at the tavern, waiting all day for him to come,” Sanborn said. “Every time they heard anybody coming they would run out of the tavern and wait for him, only to find ‘just another farmer,’” Sanborn said.

Though reluctant to add delays to his tour schedule, Lafayette visited the gathering at the tavern the following day before departing to Cornish, his last stop in New Hampshire before crossing into Vermont, Sanborn said.

Icher initiated this project in 2017 while serving as junior ambassador of the French consulate in Boston, Massachusetts. His organization, Lafayette Trail Inc., aims to establish 175 markers across 25 states in time for the bicentennial anniversary of Lafayette’s tour.

Twenty-eight markers countrywide have been installed to date while an additional nine or 10 installations are on hold due to the novel coronavirus pandemic, Icher said. Two planned installations are upcoming in Derry and Hopkinton, and Icher is working with communities in Portsmouth and Greenland to add markers.

Icher’s project received the support of New Hampshire in 2019 through the passage of SB 217, a bill establishing a state Lafayette Day. This bill, sponsored by Republican Sen. Ruth Ward of Stoddard, laid the groundwork to allow Icher to work with local communities to create markers.

“That was a very exciting day and a fun thing to do,” Ward said. “It didn’t cause any kind of problems or opposition and everybody was happy with it.”

Democratic Rep. John Cloutier of Claremont, who chaired the Public Works and Policy Committee at the time, noted that the bill passed unanimously in the House immediately following its hearing.

Ward said she sponsored the bill on behalf of Virginia Drye, a New Hampshire resident who began assisting Icher with his project in 2018.

“I’m really excited to have a permanent marker to recognize New Hampshire’s part in a historical moment of local and national significance and a reminder to us as Americans of our freedom and liberty,” Drye told the Eagle Times.

During the ceremony, Drye read a letter on behalf of Joe Kenney, executive councilor for Claremont.

“General Lafayette will forever be remembered as a friend and a supporter of our country,” Kenney’s letter stated. “We are indebted to his memory and his courage.”

The Lafayette Trail Project is funded through donations and grants, including a partnership with the William Pomeroy Foundation, a nonprofit organization dedicated to helping to establish historical markers nationwide.

To learn more about Lafayette, the trail project or how to donate, please visit the Lafayette Trail website at thelafayettetrail.org.