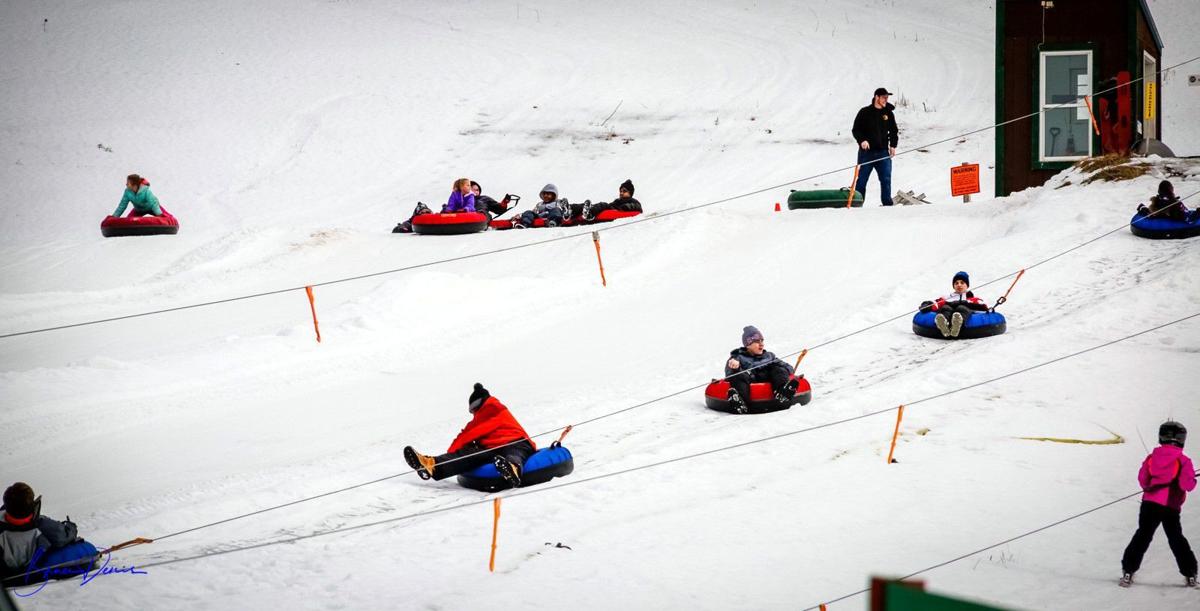 A group of children smile with excitement as they look forward to a fun day of tubing at Arrowhead. 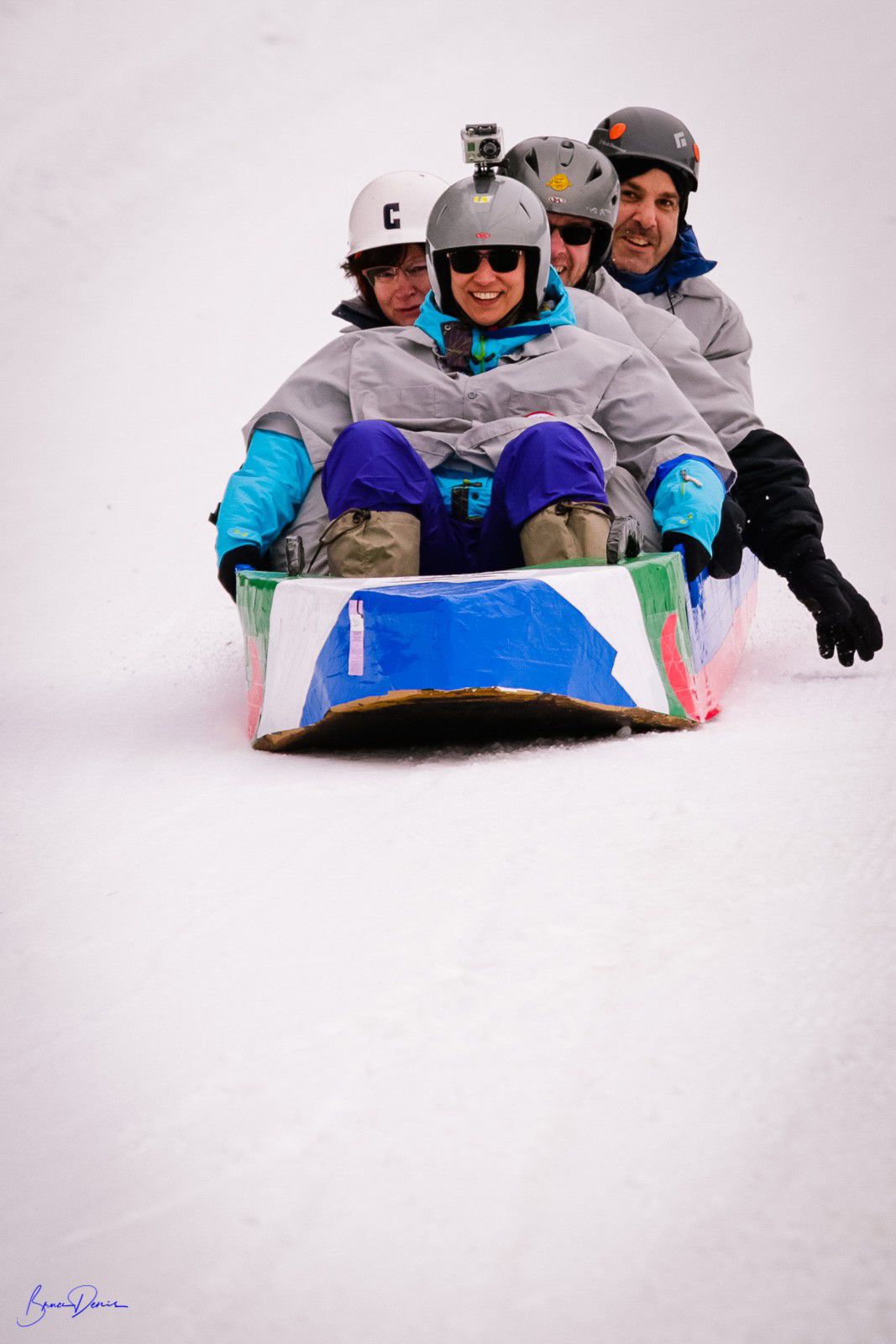 Four people stuff themselves into a single sled for a fast-paced, exhilarating ride at Arrowhead.

A group of children smile with excitement as they look forward to a fun day of tubing at Arrowhead.

Four people stuff themselves into a single sled for a fast-paced, exhilarating ride at Arrowhead.

LONDONDERRY, Vt. — The ski season may have gotten off to a late start with snow delays holiday season snow delays and January thaws, but local ski resorts large and small, downhill and cross country, have mixed reviews on this season.

Geoff Hatheway, president and owner of Magic Mountain Ski Resort in Londonderry, explained in an interview with the Eagle Times that the month of December was a slight challenge with the late snowfall, although the manufacturing of snow was able to fill the gaps in precipitation. January, however, was a different and more challenging story.

“I think everyone has been affected quite frankly this year. So there’s been a lot of resurfacing going on earlier in the year,” Hatheway said.

The December and January weather was a challenge for Magic Mountain but Hatheway said the recent snowfall has put them back on track with 48 of their 51 trails and glades open.

“When we had a number days of rain and a thaw in early January, a time when temperatures get up to 60 degrees for a couple days, all the resorts had to go back and resurface the snowmaking,” he said.

Hatheway said this winter has probably affected all resorts,just in different ways. For instance, the grooming issue was the same for ski trails everywhere.

“I don’t think it’s just the small resorts,” Hatheway said. “Everyone had to do that. I mean, so obviously the smaller resorts, we have to do more and we are coming back, and our snowmaking systems aren’t as big powerful, but we did a pretty good job. But it’s been an interesting year.”

Magic Mountain has returned to its original projections as a result of the recent snowfall and the glade trails with more trees are especially beautiful.

“Across the map we have 94% of our trails open and most of the glade areas as well which is what Magic is famous for as well as steep inclines,” he said. “So it’s coming together. But it’s difficult for us when early in the season we’re just getting going and we’re trying to expand range during days like we had in early early January that’s like springtime. We had to have our recovery time on that, it could be a little longer than some of the major resorts just because of the size of our operation.”

Deep cold nights are what the resort’s snowmaking thrives on even when there isn’t snowfall.

“This winter we just haven’t had a whole bunch of concealing cold weather, and for us it has not been easy because you can’t make snow at 32, 33 and 34 degrees. A lot of our nights have never really gotten down to the teens and low 20s, which we really need to make a good productive month,” Hatheway said.

Bonnie MacPherson, communication manager for Vail Resorts, said Mount Sunapee and Okemo Mountain Resort have both had to make a lot of snow and groom their trails but because their operation is larger they have not experienced the season’s difficulties the way smaller resorts have.

“We actually opened right on date and we had a winter actually wasn’t a late start for us,” MacPherson said. “It came on gangbusters in November with a lot of really consistent cold temperatures. It allowed us to open with the most terrain we’ve ever opened with on opening day and we had a great jump start to the season.”

But she said even though the resort was able to maintain their usual quality it was a challenge the resorts pushed through and the latest snow has made it easier on their crews.

“We did start to see some strange weather patterns in December,” she said. “We’ve actually put about a third more water through our snowmaking system than we did last year. So we’re actually making more snow this year than we did last year. So, you know, it’s just it’s been more work. It’s been more challenging which it had to be, you know, and we just had to be more creative and just focus on being really attentive.”

As a people we have no idea how we evolved to live on a ball of dirt and water floating in space 92 million miles from a sun in a universe that seems endless. And even though annual weather patterns have changed for thousands of years today climate change is a reason for it being hot, cold or a storm happening with in months. The average temp has moved 1 degree on average since 1865! It appears to me when everyone is eating kale, waring Berkinstocks and driving an eclectic car it will be called weather again. Greta Thornberg can’t vote, buy beer or rent a car but she can tell the whole world how climate science works. Thank god Al Gore invented the World Wide Web and what was called global warming until we had a few really cold years so folks like Greta and reporters can get facts off the internet as to what’s happening. The next thing they will say is if don’t stop breathing we are all going to die! I can’t wait for this fad to pass even if the environmental wackos think they made a difference.