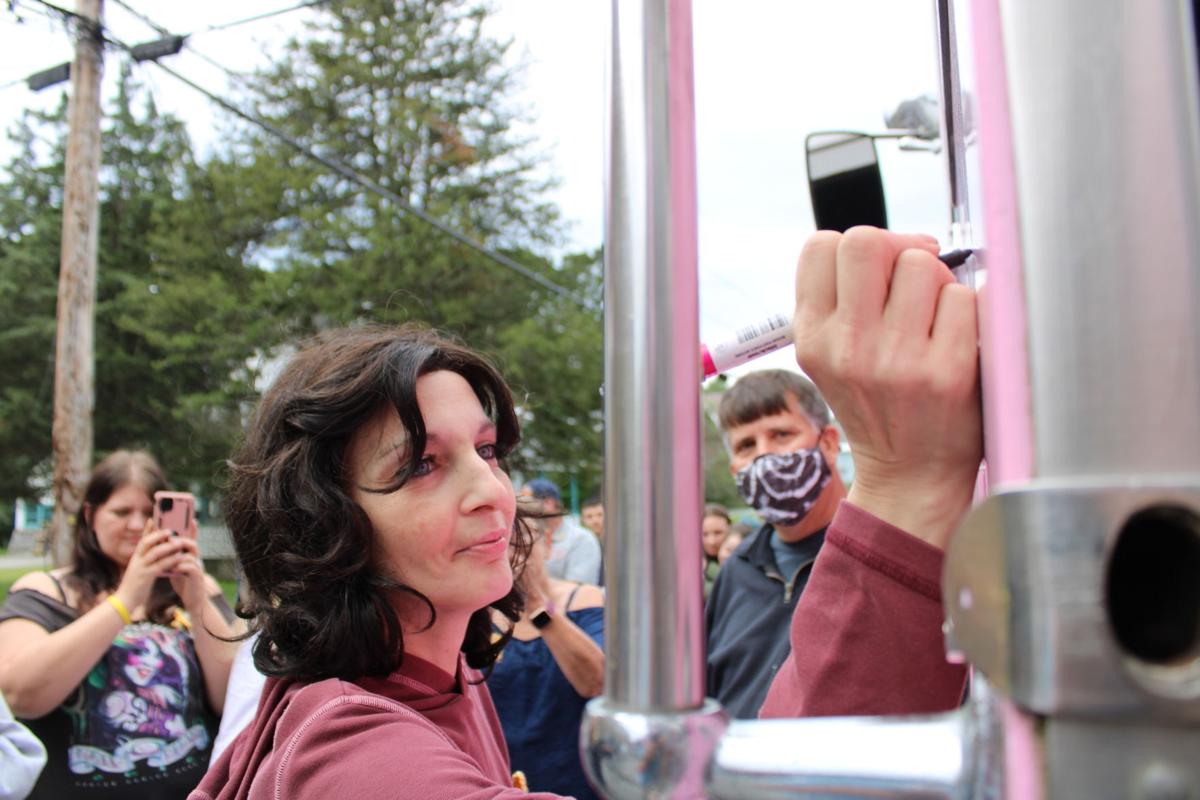 Jenny Spicer, center, of Springfield writes a note along with other family members onto Codie the Pink Heals fire truck on the Pink Heals while surrounded by friends and loved ones on the morning of Sunday, Sept. 5, 2021. Jenny, 39, was diagnosed with stage four terminal cancer. 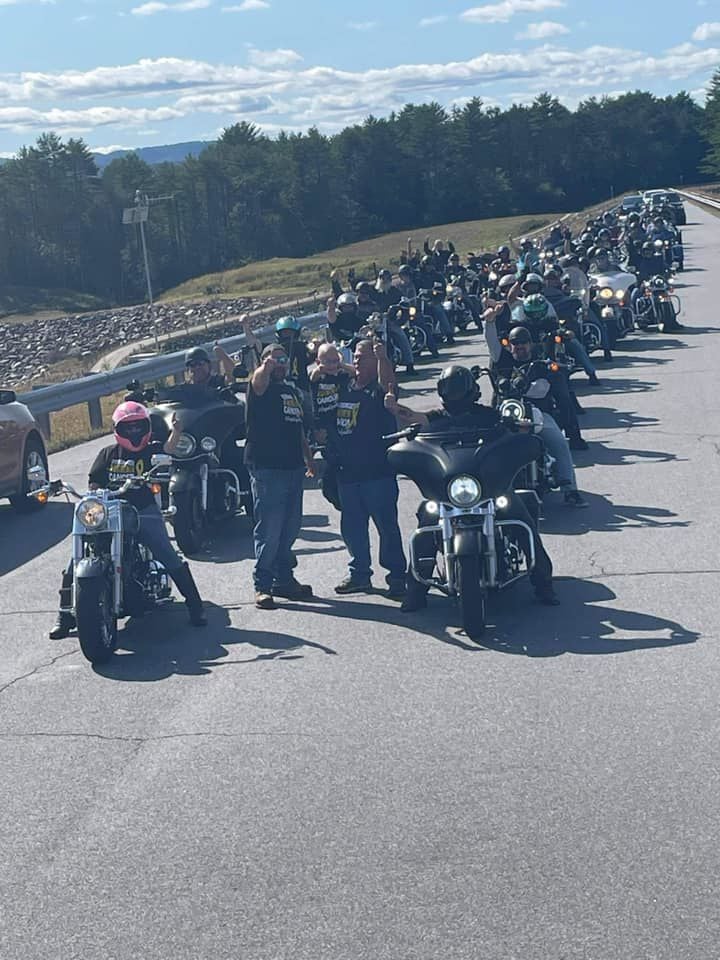 Local bikers line up at Riverside Middle School in honor of Logan Bixby, a 5-year-old boy who is currently battling Ewing’s Sarcoma, a rare type of cancer. 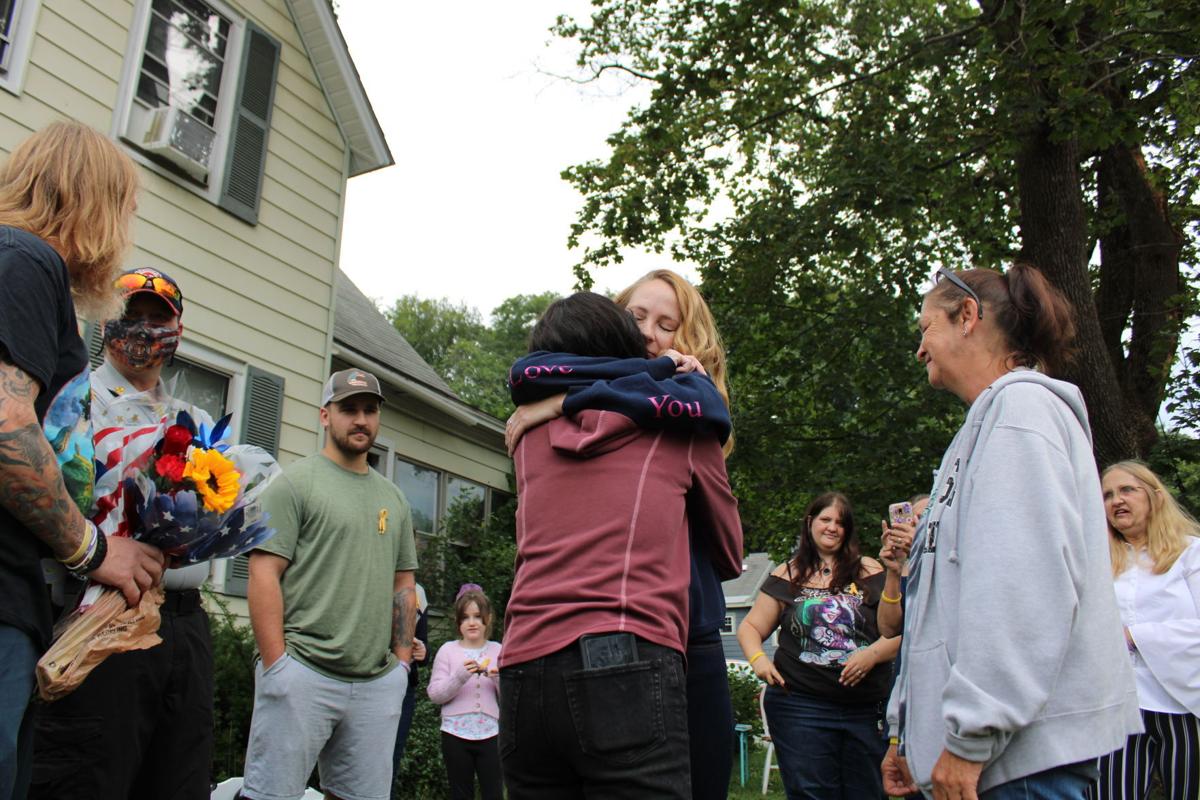 Janice Harrington-Crawford giver her sister, Jen, a hug during a family gathering in Springfield, Vt., on Sunday, Sept. 5, 2021.

Jenny Spicer, center, of Springfield writes a note along with other family members onto Codie the Pink Heals fire truck on the Pink Heals while surrounded by friends and loved ones on the morning of Sunday, Sept. 5, 2021. Jenny, 39, was diagnosed with stage four terminal cancer.

Local bikers line up at Riverside Middle School in honor of Logan Bixby, a 5-year-old boy who is currently battling Ewing’s Sarcoma, a rare type of cancer.

Janice Harrington-Crawford giver her sister, Jen, a hug during a family gathering in Springfield, Vt., on Sunday, Sept. 5, 2021.

SPRINGFIELD, Vt. — If joy is an art, the town of Springfield just painted a masterpiece.

The restful roads of Springfield and surrounding Windsor County communities were woken up the weekend of Sept. 4 to the sounds of revving motorcycle engines and honking fire truck horns as residents joined colleagues, friends, family, neighbors, and strangers in two celebrations of life that demonstrated the true strength and resilience of the human spirit.

On Saturday morning, more than five dozen motorcyclists rode their 58 bikes into Riverside Middle School’s parking lot, put down their kickstands, and settled into the crowd of people all there to take part in a three-hour ride in support of Logan Bixby, a 5-year-old boy who loves the company — and, of course, the motorcycles. And so it came as no surprise to see Logan full of delight as he toured the seemingly endless line of bikes, examining each one’s distinguishing features, colors, and designs right alongside his mother and father, Darcy and Shane.

Though the day was undoubtedly a celebration of Logan — an extremely lively and social soul who would choose the rainy outdoors over the comfort of the couch any given change, according to his mother — there were a number of smiling faces that couldn’t help to hide their true emotions.

Logan, a loving and caring young boy, has Ewing’s Sarcoma, a rare type of cancer that occurs in bones or in the soft tissue around the bones.

But Logan is a champion of adaptation, and so while the fight persists, he keeps swinging. For his efforts, his father, Shane, along with friends and family decided to resurrect a memorial bike ride that was once held annually in memory of his cousin, Jen Bixby, who passed away around nine years ago in a motorcycle accident. Now, it would be in honor of his son, a lover of the fast-moving, two-wheeled, action-packed vehicles.

A large crowd was gathered on Saturday to support Logan and his family, raising $3,000 from registration fees, bracelets, and kind donations that go directly to help fund Logan’s treatment.

For Logan, it was a dream come true.

“He thinks they are so cool. He had never been around so many at one,” Darcy said. “At first it was a bit overwhelming but he was psyched about it. Now he wants one.”

As the sun set on Saturday and rose again the following morning, another gathering just 1.7 miles away from Riverside Middle School was beginning to take shape.

But rather than a celebration on two wheels, this significant occasion would call for much bigger and louder vehicles.

Thirty-nine-year-old Jennifer “Jenny” Spicer has a sense for when things are even a tad bit off.

So it was no surprise to anyone that she became quite suspicious when dozens of family members and friends from places near and far began showing up at her Springfield home all in the name of a “photo session” to resolve the family’s concern over a lack of updated photos.

But despite her best efforts, she couldn’t put her finger on what could really be going on. All she knew for certain: her sister had something to do with it.

“I knew my sister was going to do something,” Jenny said. “She always does something.”

And she was correct.

As a rescue lieutenant for North Walpole, Janice Harrington-Crawford has responded to countless pleas for help from the public in times of fear, grief, and uncertainty. But in early August it was Janice who picked up the phone to place her call — a wish, really, for communities on both sides of the Connecticut River to come together in support of a special person in her life, someone with whom she shares an unbreakable, everlasting bond that cannot be replicated: her sister, Jenny.

And on Sunday, it was easy to see that that call, made to Jay Meyer, coordinator of Pink Heals Vermont — the local, Putney-based chapter of the nationwide initiative that works with communities to spread love and show support for those in need — was most definitely answered.

At 10 a.m., emergency vehicles from Bellows Falls and Cavendish on the Vermont side and Alstead and North Walpole on the New Hampshire side made their way down Bridge Street, over the Black River, and into the Springfield Fire Station parking lot to line up as part of a planned parade in honor of Jenny, who was diagnosed with cancer back in March and was recently upgraded to stage four terminal cancer.

While crews from surrounding communities eagerly waited for the clock to strike 11 a.m. to make their trek up to Wall Street, Jenny was seemingly the only one out of the loop. But when several fire engines — with Meyer’s pink fire truck at the helm — made their way closer and closer to the two-story house, the strobing lights and blaring sirens flooding the neighborhood let Jenny know immediately that while her instincts were right all along, she could have never anticipated in her wildest dreams such a heart-warming ceremony all planned in her honor.

No one truly knew how Jenny would react, but everyone had the same guess.

“I think she is going to be extremely emotional, a little pissed, happy,” Janice said. “It’s going to be chaos.”

“It was surprising for sure,” Jenny said.

As the Pink Heals truck parked directly in front of Jenny, Janice exited another fire truck a few paces down the road and walked back toward the yard with flowers in hand to give her sister a big hug, Those in attendance were also on the receiving end of a thoughtful revelation too when Janice’s custom shirt revealed the caring message “I love you” to all those present once the sleeves were wrapped around her sister.

Jay then welcomed Jenny and all family members the opportunity to sign the truck.

“I love you all. Thank you,” read Jenny’s handwritten message on the driver’s side of the pink fire truck.

In a series of moments that spoke to the tremendous power and impact we all have on one another, Jenny’s final words to all those lining the street that early September morning could be seen in each snap of a camera and heard with every clap of the hands.