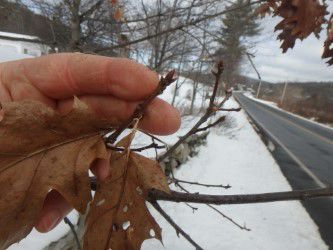 Oak buds have pointed tips and come in clusters at the tips of branches. 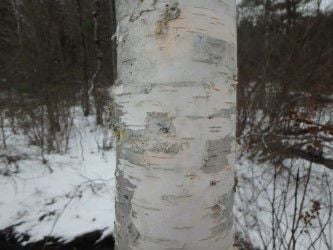 Birches have horizontal lines on their bark.

Oak buds have pointed tips and come in clusters at the tips of branches.

Birches have horizontal lines on their bark.

This is a good time to be outdoors exploring the fields and woods. There is so much to see that will be buried in snow later on. But you may ask, what is there to see? Trees, winter weeds, animal footprints, signs of insects, shelf fungi on trees, evergreen woodland plants and more. If I had to choose one person to show me the outdoors in winter, it would be Donald W. Stokes who wrote A Guide to Nature in Winter, that covers all these topics and more.

I find that learning the names and characteristics of plants and animals makes them more interesting. Many people look at all evergreen conifers and call them “pine trees.” But if you know the difference between a white pine and a Canadian hemlock or a balsam fir, you can decide if you want to grow one or the other on your property.

Donald Stokes’ book explains that if you learn to identify the six most common deciduous trees and the six most common trees with needles or cones, you will know 80% of the trees in most northern forests. And you can do this in winter. Bud location, size and shape are good indicators for identifying trees.

Maples. Like ash trees, the buds, branches (and later leaves) are arranged opposite each other, while most other trees alternate the location of them on stems. Maples have oval buds that are between ¼ and ½ inch long.

Oak. These have clusters of buds at the end of each branch, and the younger trees often hold onto their brown leaves through the winter. Buds and branches appear in an alternating pattern.

Beech. The buds on beech are long and pointy. But the most distinguishing characteristic is its smooth, gray bark. There is a beech fungal disease which can mar the bark, making it look like a bad case of acne.

White birch. Most people can recognize white birch by its bright, white and peeling bark, but other birch species can have golden or greyish bark. The bark also has long horizontal lines marking it, and they often have catkins hanging from the tips of upper branches.

Poplar, also called aspen. These trees tend to grow in clumps in places with poor soil. The upper bark has a greenish tinge, and their buds are variable in color, but always have sharp, pointy ends.

Then there are the evergreens:

Pines. They have clumps of needles in groups of two, three or five. White pine, the most common, has groups of five long, soft needles.

Hemlock. These trees have short (1/2-inch), soft needles with two white lines on the underneath side. There is a short stem between needle and twig.

Balsam fir. One-inch needles, also with two white lines underneath but no stem between needle and twig.

Spruce. Four-sided needles that are uncomfortably sharp to the touch.

Larch. No needles in winter, but cones may be present. Stubby twigs on branches.

After that basic list of characteristics, the Stokes book provides interesting details about the various species of trees, and differences within a genus. So, for example, he explains that most wooden sports equipment – and the handles of our garden tools – are made from ash because it is strong, relatively light and flexible. And he notes that sycamores, known for beautiful variegated bark, are often hollow when large, and home to nesting mammals like raccoons and skunks.

I was fascinated to read that willow seeds, if washed away and deposited on a muddy bank (in spring), can germinate in two days and grow 7 feet during the first year.

Poplars or aspen are often the first trees to grow after land has been burned or damaged by construction of roads. They often appear in clusters, as new trees pop up from the roots. They are not long-lived like maples or oaks which can live hundreds of years: poplars, Stokes noted, generally last no more than 80 years, and frequently less.

Did you know that the sounding boards of many musical instruments are made of spruce? Stokes points out that it is especially clear of knots and imperfections, and resonates better than other woods.

If you pay attention to your trees, you will learn to identify them by shape and bark. Sugar maples, for instance, have nice rounded tops and older ones have craggy bark. I can identify a white pine from a fast-moving vehicle: branches on the lower part of the tree droop downward, upper branches reach for the sky.

So, head outdoors and study the trees along a woodland path. And bring along A Guide to Nature in Winter. Almost anyone will learn something from it in no time.

Henry Homeyer can be reached by email at henry.homeyer@comcast.net or by snail mail at P.O. Box 364, Cornish Flat, NH 03746. He is the author of four gardening books.