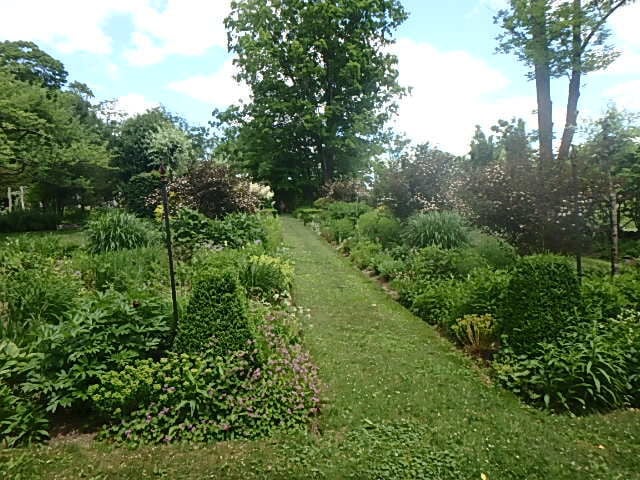 Garden paths should be the same width for their full length. 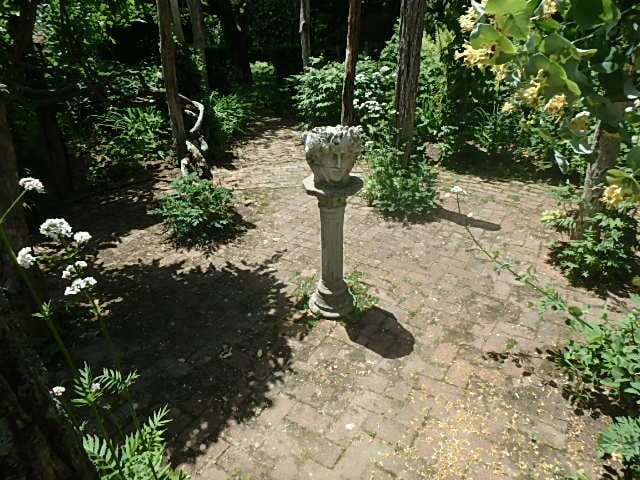 Sculpture adds beauty and interest to a garden.

Garden paths should be the same width for their full length.

Sculpture adds beauty and interest to a garden.

Let’s say you have recently purchased a house and want to create beautiful gardens. How should you begin? I recently visited Gordon and Mary Hayward, both garden designers, at their home in Westminster West, Vermont. Their gardens are as nice as any private gardens I have seen, and I wanted to understand their thought process.

The Haywards bought a 1790s farmhouse 36 years ago that needed a lot of work. The landscape was full of brush and abandoned cars. But they were undaunted. They explained that they wanted a house in a garden, not a house with gardens you walk by. They wanted to be surrounded by gorgeous flowers and trees, with sculpture and walkways. They wanted gardens all around them.

The first thing they did was establish the central axis of the gardens. They did this by tying a string to the front door plate and running it straight out to the trunk of a mature apple tree, thereby creating a focal point. All the main beds are either parallel or perpendicular to that string. I’d estimate the pathway along the central axis extends from the house for a couple of hundred feet.

At the end of that central path is a magnificent old apple tree, surrounded by an 80-foot circle of lawn, because the drip line of the apple tree is circular. Flowers in curved beds surround the lawn. As Mary Hayward said, “Curves need to make sense.” Most of the paths and lines in their garden beds are straight, only occasionally curving or meandering to go around a fixed feature.

“Pay attention to views from the doors and windows because they’ll suggest garden placement,” said Gordon. Look out them, make sure what you see pleases you. Not only that, he said you gain confidence in your design if you pay attention to the house. There needs to be a relationship between the house and the garden spaces. “The garden is an extension of the house and the people in it,” he said.

What else should one consider? The north-south orientation is important, Gordon said. You can grow roses on the south side of a barn, for example, but not on the north side, as there is much less sun. Where is sunset? Most of us like to rest at the end of a day in the garden to watch the sun go down. You can design that – and maybe steal a view of distant hills owned by others. You may need a chain saw to accomplish that.

Mary Hayward grew up near Hidcote Manor Garden, one of England’s finest old gardens, and visited often when growing up. Those visits shaped her view of how a garden should look: a series of connected rooms. Gordon Hayward grew up on an apple orchard, and so he wanted apple trees on his landscape as an adult. It makes sense to have elements of a garden resonate with each person, based on personal history.

“Every decorative element in a garden should have a story, a reason,” Gordon said. “Don’t go buy a cute elephant. Consider what your grandmother or grandfather had.” In the long run, that will resonate with you better.

When Gordon designs a garden for someone, he always asks what their parents or grandparents had for gardens. Are there special plants that bring back memories of simpler times? So, for example, I have a piece of a peony my grandmother (who passed away in 1952) grew called “Festiva Maxima,” and I would hate to be without it. It’s my favorite flower.

Mary and Gordon spent time researching the farm they bought, learning about how it operated and where long-gone outbuildings were located. They have three old milk can where the milking parlor once stood, and other features that remind them of the farm’s history. They unearthed granite fence posts and old bricks, and put them all to good use.

There is an old tobacco-drying shed in the gardens, and they used the proportions of that to determine the size of beds near it. The door of the shed is 8 feet tall, so they used multiples or fractions of 8 for beds around it. The barn itself is 16 feet long – the same measure as the dirt road in front of the property, an old unit of measurement called a rod.

Gordon pointed out that, for five months of the year, there are no perennials visible in their garden. It is thus very important to have stone walls, trees, sculpture, pottery and outbuildings that are handsome and clearly visible from key windows of the house all year long. Designed properly, a garden can be as beautiful in winter as it is in summer. And since trees and shrubs take time to reach maturity, they are a logical early step when designing your garden.

I bought my house 50 years ago this August. It’s an old creamery, a butter factory built in 1888. It came with an acre of land, though I have since added more land. It had no perennials or shrubs, just a big native cherry tree, a few sugar maples and two huge elms, now long gone. Lawn surrounded the house.

If I were starting all over again, I would begin by designing a garden layout. To help me in that endeavor, I would study good gardens in glossy books and by visiting as many fine gardens as I could. I would take classes and go to arboretums to learn about trees and shrubs that might be used to improve the landscape. I would join a garden club and go on garden tours. And I would certainly want to read all of Gordon Hayward’s wonderful gardening books.

Henry Homeyer is the author of four gardening books and is offering Zoom presentations to garden clubs and library groups. Email him at henry.homeyer@comcast.net for more information.