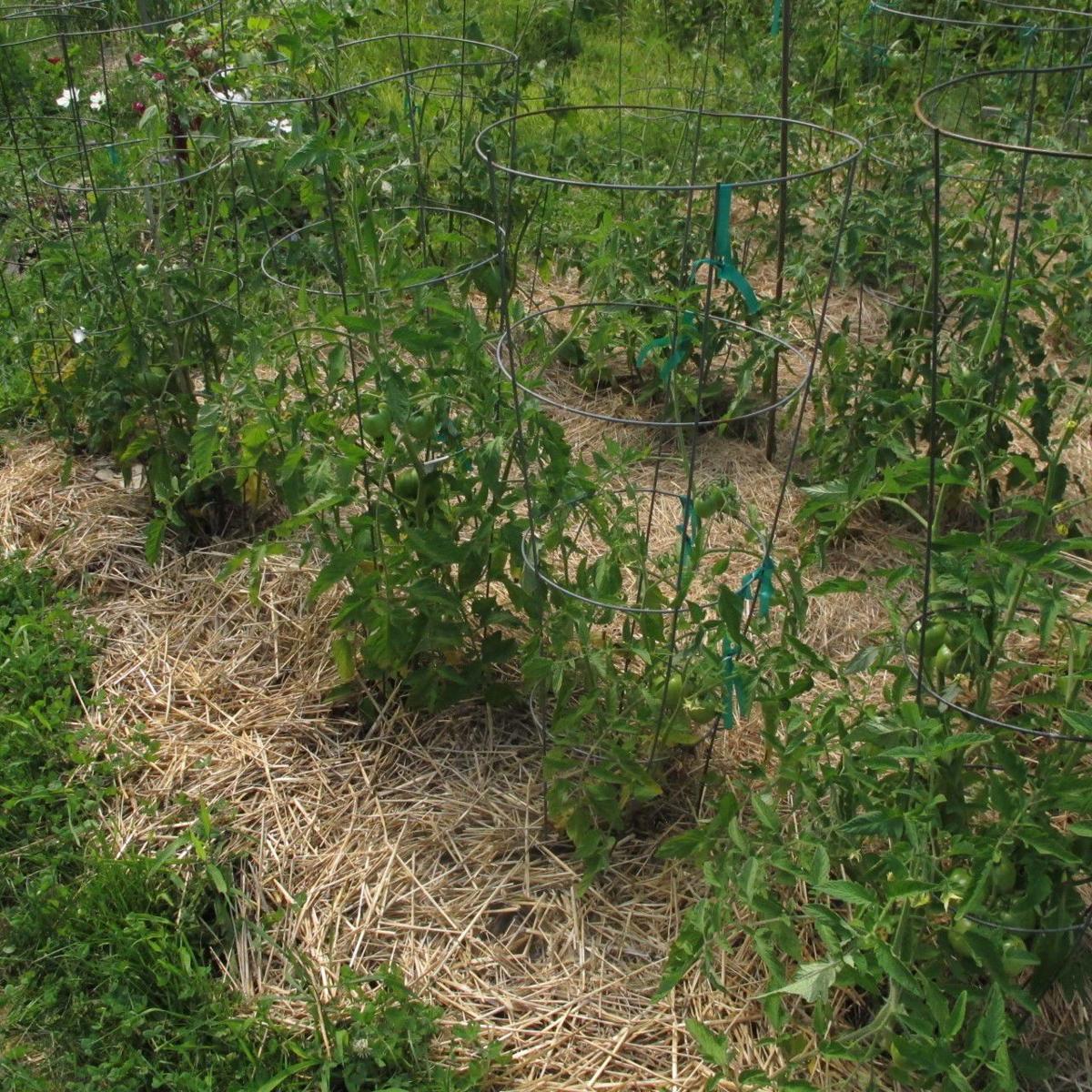 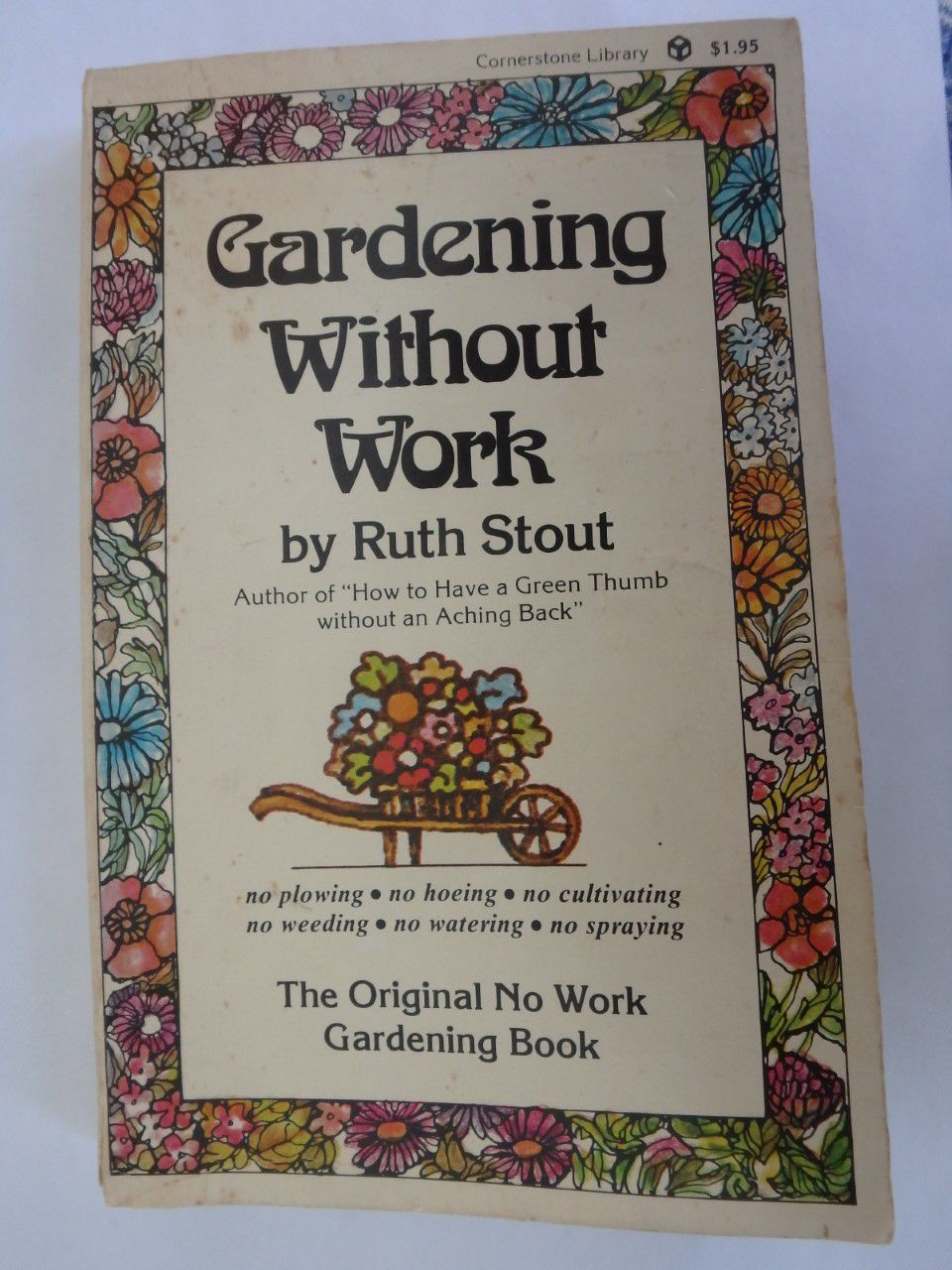 Ruth Stout, born in Topeka, Kansas, in 1884, lived to the ripe old age of 96. She was an early proponent of organic gardening and was also (as seen from her writing) a sweet, funny, intelligent and common-sense person. I recently read her book, “Gardening without Work:” for the aging, the busy, and the indolent, from cover to cover in an afternoon. I had heard much about her, but had never actually read this book before, or her most famous one, “How to Have a Green Thumb Without an Aching Back.”

Ruth Stout made a name for herself largely by writing about mulching. Hay was her main form of mulch because it was cheap and plentiful. She got hay that had been spoiled (as animal food) by rain and applied it in thick layers. But she also used leaves, food scraps and any organic matter to enrich her soil as it broke down. She touted the ability of mulch to smother weeds and hold in moisture.

In the 1950s and 1960s, “modern” gardeners and farmers were using DDT to kill insects and chemical fertilizers to push growth. She avoided all chemicals and got great results. She was not trained as a scientist, but depended on common sense and good observation skills to succeed in her garden. Below are some of the things she said in her book.

“My simple way is to simply keep a thick mulch of any vegetable matter that rots, on both my vegetable and flower garden all year-round. As it decays and enriches the soil, I add more.

“I never plow, spade, sow a cover crop, harrow, hoe, cultivate, weed, water, irrigate or spray. I use just one fertilizer (cotton seed or soy bean meal), and I don’t go through the tortuous business of building a compost pile.”

How often did she mulch? “Whenever you see a spot that needs it.” How deep is her mulch? Eight inches, on average. “Use all the leaves around. Utilize your garbage, tops of perennials, any tall vegetable matter that rots.”

Ruth Stout loved asparagus, and planted plenty. She said the mulch slows soil warming in the spring, so she raked the mulch off part of the patch to get an early crop of asparagus, then left some mulch on for late asparagus. That’s good common sense.

She sowed corn and immediately applied a thin layer of mulch, allowing the corn to push up through it. The mulch deceived the crows, which love to eat newly germinated seeds. I once lost two 50-foot rows of corn to crows, who ate it up in one day as soon as it germinated! And peas? She raked off mulch a few weeks before planting to allow the early spring soil to warm up.

What else did Ruth Stout promote? Diagram your garden in winter. Take time to measure and plan before ordering your seeds. Order seeds early, before the best varieties run out. (I agree. I bought Sun Gold tomato seeds this week, as I have had trouble finding them in April, when I start tomatoes in the house). I like her observation that seed catalogs are to gardeners like “catnip to a cat.”

Witch grass, or Johnson grass, a grass that spreads quickly by root, was not a problem for her. She mulched, and added more mulch if it pushed through the mulch. She also used newspapers under the mulch hay for witch grass, which I have found very helpful.

All soils benefit from year-round mulch. She noted that during the dust bowl of the 1930s, soil was blown away in huge quantities. That was due, in part, to the fact that soil was left bare after harvest, and blown away in dry times. She emphasized the need to always have your soil covered with mulch.

Ruth Stout developed lots of good tricks during her many years as a gardener. One I liked had to do with planting small seeds like lettuce or carrots. She said you can get fairly good spacing by taking a pinch of seed and then dropping it from waist high. As the seeds drop, they spread out. Not for a windy day, of course, but I will try it, come spring.

She wrote that one need not buy a chipper to break up leaves for use as mulch. Just rake them onto the driveway. Then after cars run over them a few times, rake them up and use them. Clever. Me? I use my lawnmower to chop up leaves, blowing them all in one direction, creating a windrow. Then I put them into my garden cart or onto a big blue plastic tarp to take them away.

Ruth Stout froze lots of garden vegetables for winter use, including whole ripe tomatoes. I freeze tomatoes since it is the easiest, fastest way to preserve them. But I have only used them in stews and soups. She went one step further: she let them thaw a bit, and ate them with a spoon. So, I tried it after reading her book, and agree that although they don’t have the right consistency for sandwiches, they taste good.

I am a fervent proponent of mulching everywhere and believe it works. I suggest you read one of her books this winter, and give it a try.

Henry Homeyer has written four gardening books. He is a master gardener who lives in New Hampshire.