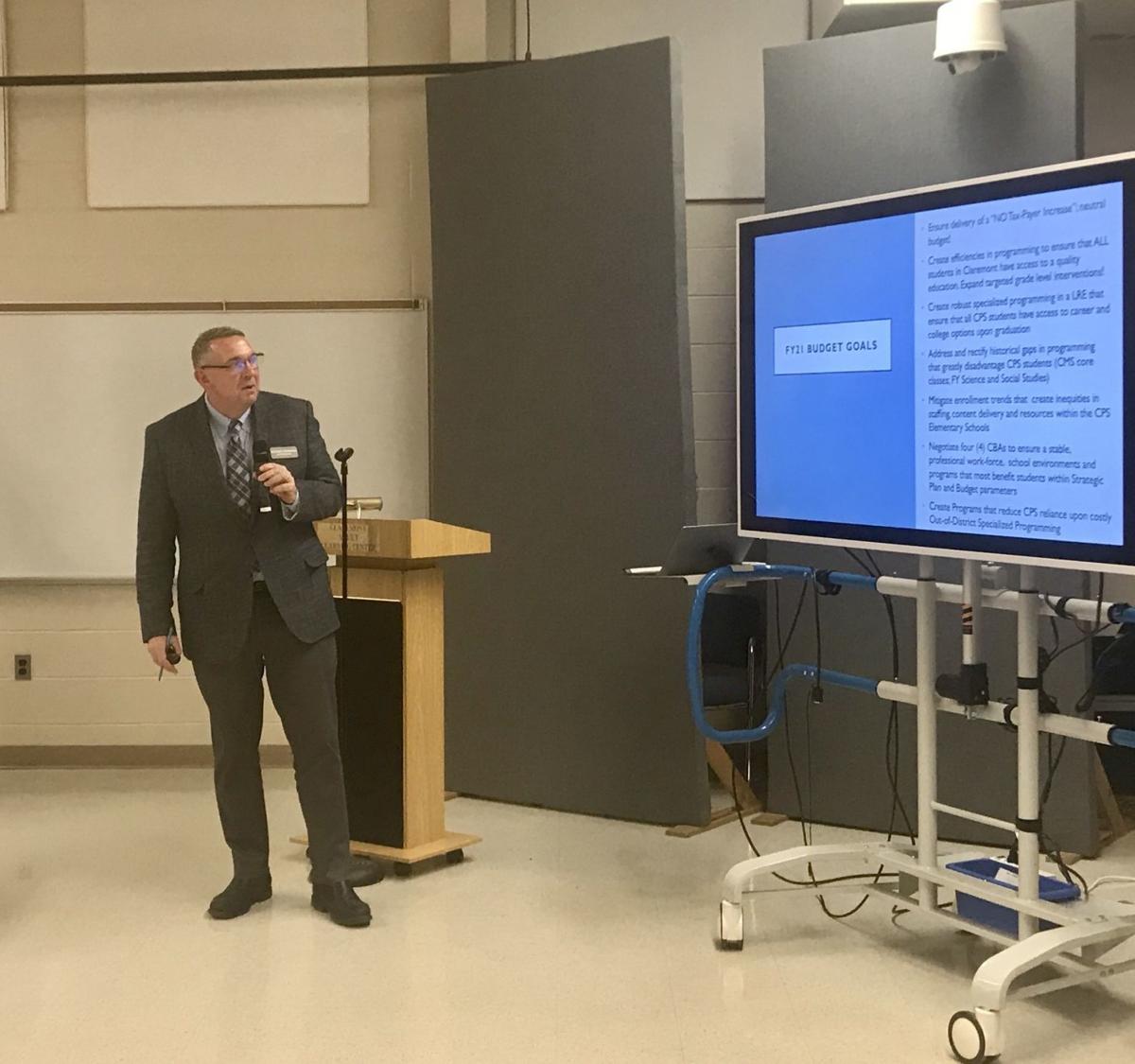 Claremont Superintendent Michael Tempesta identifies budget goals and elaborates on the reorganization of the city’s three elementary schools to the Claremont School Board Wednesday night. 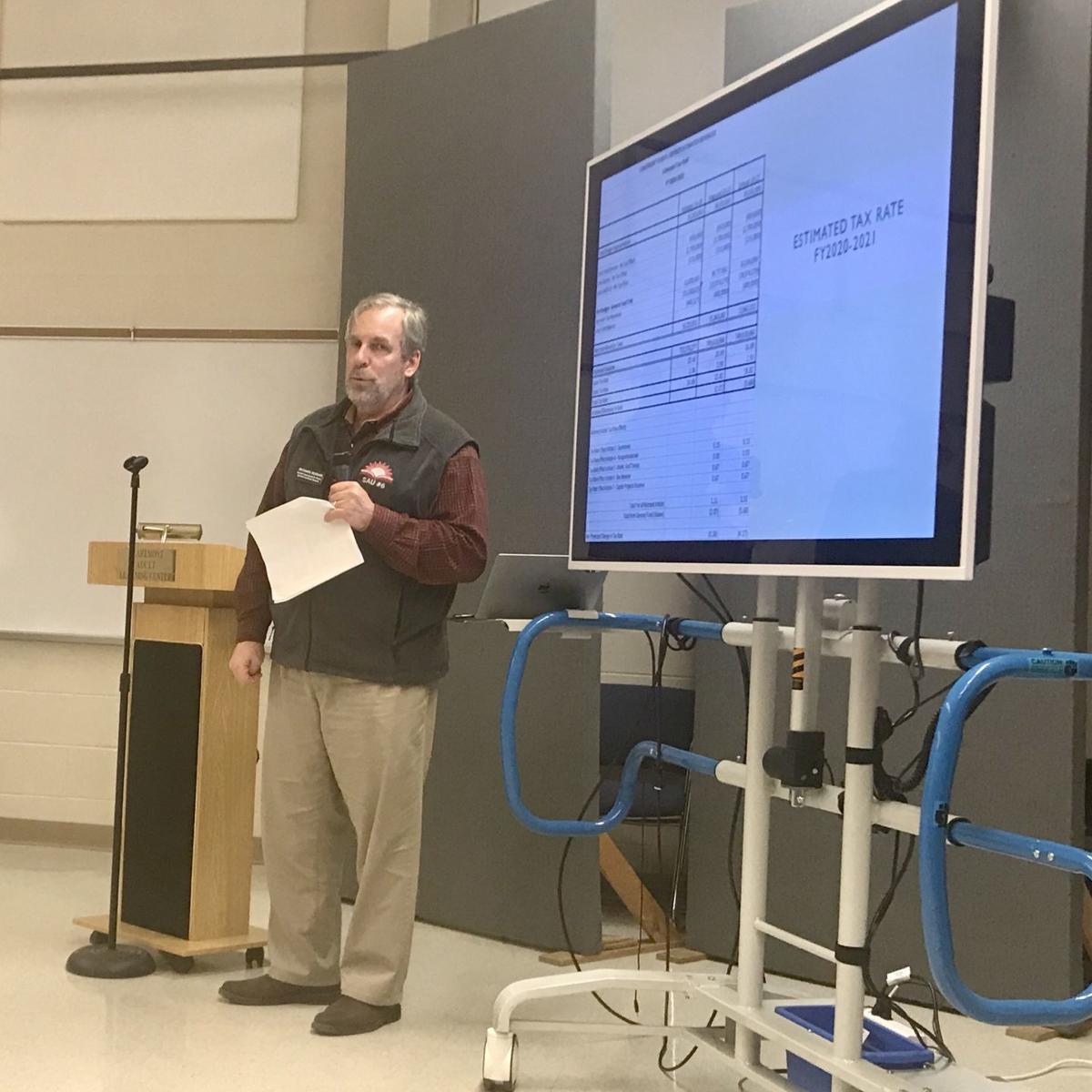 Claremont Superintendent Michael Tempesta identifies budget goals and elaborates on the reorganization of the city’s three elementary schools to the Claremont School Board Wednesday night.

CLAREMONT — A new teachers union contract, restoration of all-year science and social studies courses for all grades at Claremont Middle School and $2.9 million in funds for capital projects were some features of the proposed operating budget submitted Wednesday.

The Claremont School Board had its first look at the $36.8 million budget proposal for the 2020-2021 school year presented by Superintendent Michael Tempesta, along with five warrant articles that would have an additional combined impact of about $1.1 million. Although the total asking amount would be $3 million more than the current fiscal year, additional revenues received in the state budget — including $2.9 million in one-time unrestricted aid next year — would reduce the tax rate on residents by $2.06, or 56 cents if all articles are approved.

The school board noted that most of that increase reflects the $2.9 million in capital investments, which would be one-time expenditures and paid for by the unrestricted aid received this year from the state. These capital investments comprise of numerous projects that the district has put on hold over the years due to financial constraints.

“It really is about investing,” said Claremont School Board Chair Frank Sprague. “We’re looking down the road at very few warrant articles for the foreseeable future... if we don’t use the money now, which is state money, we’re going to be using our own money later.”

Sprague explained that Tempesta’s predecessor, Middleton McGoodwin, had to make drastic district-wide cuts when he took over the superintendent role to erase a $900,000 deficit. Part of those cuts included the reduction of social studies and science teacher positions at the middle school, as well as courses for students to half-year.

“And the results of that are clearly seen in the students who come up through high school and onto college, that they have not had the background in those core areas that they should have,” Sprague said.

The operating budget submitted by Tempesta also included $403,000 in pay increases to district teachers as a result of the district’s new collective bargaining agreement with the teachers union.

SAU 6 School District Finance Director Richard Seaman said that the district aimed to make Claremont teacher salaries more competitive with other districts in the area. The agreement would raise the starting average salary from $36,228 to $40,000.

“[That] is still low compared to many in the area, but at least [it is] competitive,” Seaman said. “And this was done to reduce some of the turnover. Because we see significant turnover where good teachers spend two or three years here and then leave the district to make more money.”

The proposal also shows an increase in next year’s operating budget for out-of-district placements, from $380,000 this year to $519,000. Board members and administrators explained that this number is based partly on the actual number of students either out-of-district or currently slated for placement, as the voter-approved funds for expanding the district’s in-house program have not been spent yet. Sprague explained that in previous years, the administration sometimes advance a lower budget than actually needed, so while this number might appear higher on paper, in actuality the district is not spending more.

Despite having a proposal that addresses an array of district needs without increasing the tax rate, the school board may still have to dissuade some residents from voting it down in March.

In a departure from previous years, the 2020-2021 default budget, estimated at $32 million, is significantly lower than the proposed budget. If voters defeat the budget currently put forth, the default budget would reduce the current tax rate by $5.68 per $100,000 of assessed property.

While realizing that the lower budget might attract voters, board member Jason Benware pointed out that voters would only experience one year of tax relief before the taxes jumped back up the following year, since the savings in the default stem from the one-time state money.

The default budget amount is essentially the current budget’s appropriations with expected increases and decreases for the pending year factored in, such as guaranteed contracts or, in this case, the unrestricted state aid for fiscal year 2021.

The default budget would not fund the negotiated teachers contract or the $2.9 million in capital investments. Additionally, Seaman said that the current proposal includes $759,000 in savings from the district’s removal of 33 unfilled paraprofessional positions. In the proposed budget, those savings are appropriated to other budgetary needs. But if the proposed budget fails, the default budget still assumes those positions were cut, so the savings from those cut positions would go to the taxpayers instead.

“It’s a prudent idea to think ahead and take care of problems [when you can],” said board member Jason Benware. “But as taxpayers, if you choose not to do that and seek instant gratification this year, the fact is that, for several years down the road these issues will be coming up… If these things have to be done, the wise thing to do would be to do them when we have money available.”

The district will restructure Claremont’s elementary schools from three overlapping K-5 schools under a bold plan proposed by Tempesta.

The reorganization of schools to a grade-level system, according to Tempesta, will provide numerous benefits, including: create more stability and control of class sizes from year to year; offer a cohesive, equitable K-5 experience for all students; cultivate students cohorts; and open opportunities for more content-based learning and accelerated or specialized learning programs by pairing teachers to their areas of strength and program needs.

In regard to stability, an ongoing issue under Claremont’s current system is fluctuating class sizes from year to year, according to Tempesta.

“When you replicate the same model in three different schools, sometimes you can have mismatched class sizes,” Tempesta said. “Because of the districting map we’ve been tied to historically, there can be fluctuations in populations that can affect the size of the school, and sometimes the resources inside the school.”

In the current school year, Bluff Elementary has a total of 18 third grade students, while Disnard has 41 and Maple Avenue has 52. Looking at Bluff specifically,the 2019-2020 third-grade cohort is less than the school’s average. For perspective, last year’s third-grade cohort had 26 students, and next year’s group will have 31 students. Those fluctuations often cause schools to shuffle their teachers and staff from one year to the next to accommodate sharp changes in cohort size, and situations with inequitable class sizes between schools. Currently, Bluff has two third-grade classrooms with student sizes of eight apiece, whereas Disnard has two third-grade classrooms with student sizes of 19 and 22.

Under the plan, the district pre-K program would move from its current location at Sugar River Valley Career and Technical Center to Maple Avenue. Tempesta said that by moving resources, positions and space, Claremont would be able to provide a universal, all-day pre-K program for at least 60 students.

“Which would greatly increase the literacy of students as they enter the early grades,” Tempesta said.

But, Tempesta also recognized that such a change will also pose challenges.

“I know there are teachers here who have spent their whole careers in one classroom,” Tempesta said. “There is an amazing personal investment that teachers have, and there’s an intrinsic value and attachment not only to what they do, but where they go every day.”

Tempesta said that the district aims to work collaboratively with teachers and staff, and will be highly sensitive to people’s needs during the process.

Claremont School Board Vice-Chair Rebecca Zullo raised the question of transportation and impacts on student pick-ups and drop-offs. Zullo illustrated the possibility where a parent might now have to pick up his or her children from three different elementary schools at the same time.

Tempesta said that transportation is one of several areas the district still has to plan.

The school district announced the plan in a letter to teachers and staff at the three schools on Wednesday. Tempesta told the school board that his administration plans to meet with the faculty and staff beginning Thursday to discuss the plan in more detail.