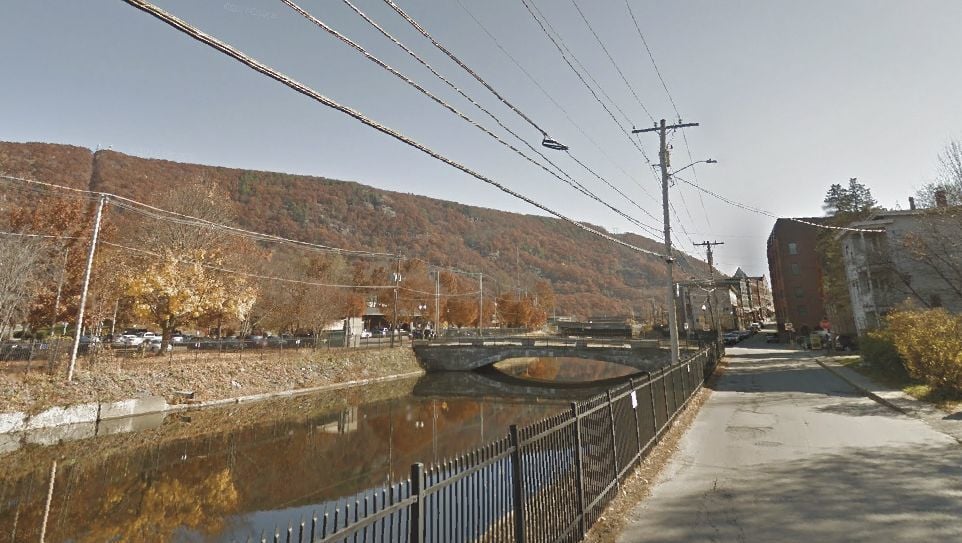 Alternative proposals mixed with previously discussed plans to replace the crumbling century-old Depot Street Bridge over the canal in Bellows Falls, Vermont, have reenergized a community debate among residents and officials as to how to effectively replace the span.

This image presented at Tuesday’s meeting shows an artist’s rendering of a potential steel truss bridge on Depot Street. Project managers say the color of the bridge could be chosen by the town.

Alternative proposals mixed with previously discussed plans to replace the crumbling century-old Depot Street Bridge over the canal in Bellows Falls, Vermont, have reenergized a community debate among residents and officials as to how to effectively replace the span.

This image presented at Tuesday’s meeting shows an artist’s rendering of a potential steel truss bridge on Depot Street. Project managers say the color of the bridge could be chosen by the town.

BELLOWS FALLS, Vt. — Obstacles to the Depot Street Bridge replacement project have reinvigorated a community debate between replacing the bridge at its existing site or constructing an alternative, angled bridge that would shift the flow of traffic further north, an option which is favored by many economic-development proponents.

Town and Village officials learned on Tuesday that the town’s plan to replace the historic Depot Street Bridge with a similar concrete arch design will not be economically viable, due to engineering challenges and related impacts that would drive the cost well beyond what the state originally anticipated.

In 2019, the Vermont Agency of Transportation (VTrans) estimated a project cost of $3.4 million to raze the crumbling 112-year-old bridge and replace it with a similarly designed replica alongside the existing location. State and federal funds would cover 90-95% of the total cost and the Town of Rockingham would cover the remainder, then estimated at $172,000.

Project managers, presenting on Tuesday to the Village Trustees and Rockingham Selectboard, reported that the proposed arch replica will require extensive engineering that could not only compromise the integrity of the historic canal but drive the project cost over budget by millions of dollars.

According to project consultant Scott Burbank from Vanasse Hangen Brustlin, Inc. (VHB), an engineering firm based in Burlington, Vermont, supporting an arch design would require the construction of a “cofferdam,” an watertight enclosure pumped dry to allow workers to build safely below the water level. Project managers learned from the owners of Great River Hydro, who operate a hydroelectric plant on the canal, the dam requires a constant water level of three feet.

When the original arch was constructed the channel had been dry, Burbank explained.

A cofferdam would cost approximately $2.1 million and could have “significant impact on the historic canal’s bottom and walls,” according to Burbank.

The extensive engineering would also require an eight month dam shutdown, requiring the project to reimburse Great River Hydro for its lost revenues, which would total an additional $1.6 million to $4.8 million, Burbank said.

The project managers instead proposed a steel truss design. While not a replica to the existing concrete arch, a steel truss bridge would not require underwater construction. Additionally, while the project would still take eight months to complete, the impact would only require Great River Hydro to close for one month, Burbank said.

Project managers said the steel truss design, while not a replica to the historic concrete arch, blends well with the town’s railroad history.

“I know a lot of people had their hearts set on the arch,” said Kyle Obenauer, an architect from VTrans. “But aside from the constructibility perspective, there has been a truss on Depot Street in the past, so there is that historical connection there. And for an area that has been so deeply shaped and influenced by railroad construction evolution, a truss also fits historically.”

The alternative proposal, which the Rockingham Selectboard rejected by a split-vote of 3-2, would have built a new angled bridge across the canal and keep the Depot Street Bridge in place, which the town could then convert to a pedestrian-only bridge.

An off-alignment bridge, proponents reiterated, would reduce the number of commercial trucks that drive through the village square and create a needed connector to The Island, a high-density industrial area that Rockingham officials hope will attract new business start-ups.

Some officials said they would like to keep Depot Street Bridge rather than tear it down. The bridge’s use as a pedestrian walkway would further enhance the downtown village experience and the bridge could serve up to another 40 years if relieved from the weight of vehicles.

“I would like to consider the value to our pedestrians and basically the Village vibe of having a bridge of flowers [and] have that beautiful experience of walking across the canal on a bridge that has been landscaped,” suggested Town Manager Scott Pickup.

The selectman who voted against the alternative bridge in 2019 identified cost as a primary concern. In 2019 the alternative bridge was estimated to cost $3.9 million and the town’s portion would have been approximately $353,100. The selectmen also expressed their reservations about assuming the liability for the existing Depot Street Bridge, which the town would have to pay to maintain or demolish when it reached the end of its life.

No decision was made regarding the Depot Street Bridge on Tuesday. VTrans is expected to provide new cost estimates for both projects: the original plan but with a steel truss design or the alternative off-alignment proposal.