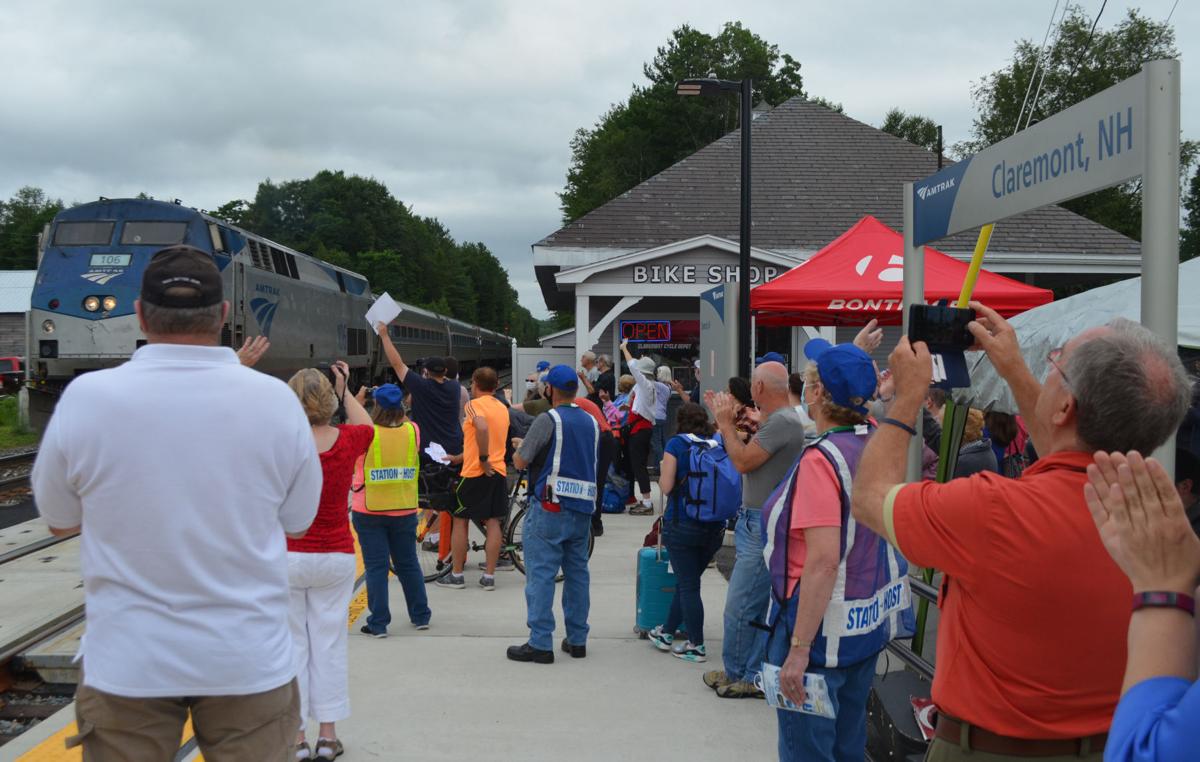 Local officials and residents wave in celebration as Amtrak's Vermonter makes its highly-anticipated return to the Claremont train station on Monday, July 19, 2021, 16 months after the coronavirus pandemic forced the national passenger rail provider to halt the regularly scheduled train. 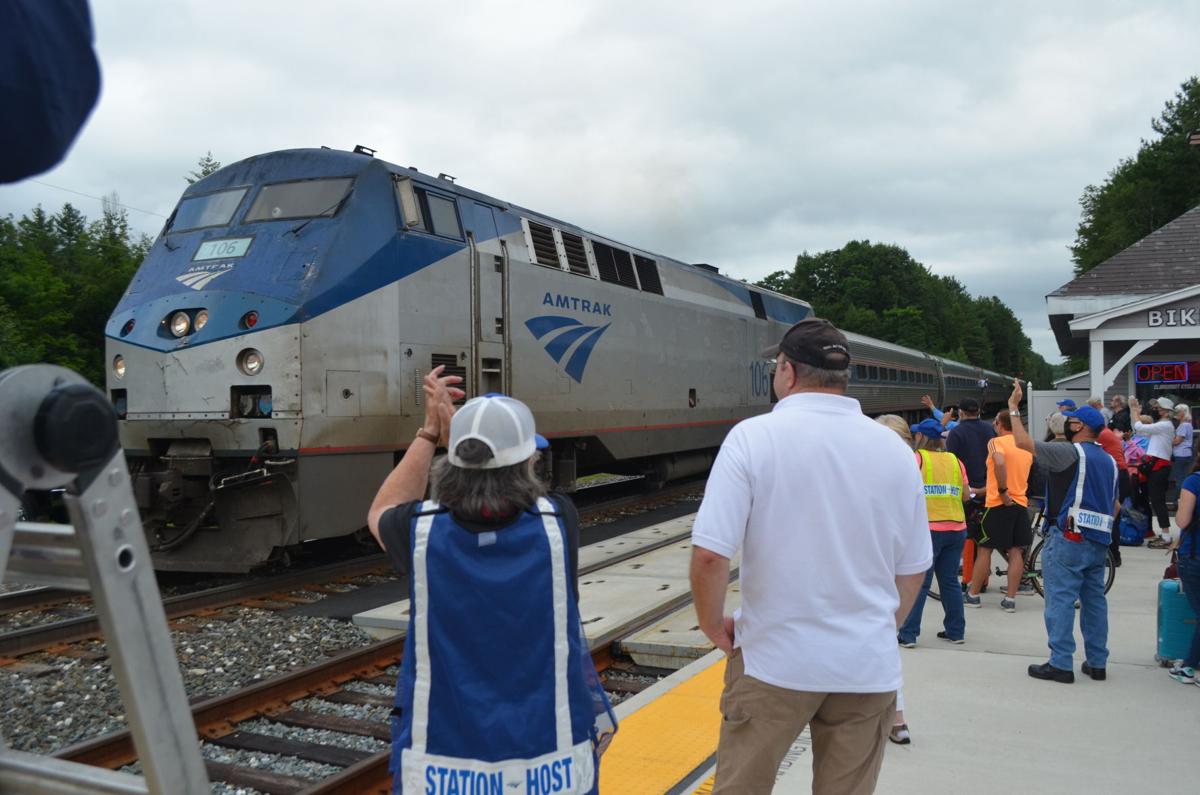 The Vermonter, an Amtrak commuter train, makes a stop at the Claremont train station on Monday, July 19, 2021, to the cheers of local officials and residents after a 16-month pandemic absence.

Local officials and residents wave in celebration as Amtrak's Vermonter makes its highly-anticipated return to the Claremont train station on Monday, July 19, 2021, 16 months after the coronavirus pandemic forced the national passenger rail provider to halt the regularly scheduled train.

The Vermonter, an Amtrak commuter train, makes a stop at the Claremont train station on Monday, July 19, 2021, to the cheers of local officials and residents after a 16-month pandemic absence.

CLAREMONT — The horn of Amtrak’s Vermonter blared for the first time in 16 months as the passenger train pulled into the Claremont station, marking what many New Hampshire and Vermont residents hope will be a long-lasting return to travel and local economic activity.

Claremont citizens and stakeholders have invested considerably to upgrade the train station, where Amtrak ridership has increased by more than 500 riders since 2012 and more than 300 riders since 2015. Since 2015 residents and local businesses have installed a post-and-beam waiting pavilion, upgraded the platform, lighting and signage and added ramps and parking to make the station Americans with Disabilities Act (ADA) compliant.

But arguably the Claremont station’s most distinguished amenity are its station hosts, a team of local volunteers who wait at the station before the Vermonter’s daytime and evening arrivals. In addition to greeting passengers and assisting city visitors with information, the hosts help riders safely board and unboard the train.

“In the past, if you got on or off the train here, two miles from the center of town and were unsure what to do or had questions about train travel, it was really hard to get a hold of someone,” said Mayor Charlene Lovett, president of the Claremont Station Host Association. “And people have really liked the personal touch.”

“We’ve all been looking forward to the Vermonter’s return for a long time, because [as] train hosts we have missed coming here on our regular schedules,” Wood said. “It has become a regular part of our daily routine.”

City Manager Ed Morris said the station is a key asset of the regional transportation and tourism play for the city and county. In addition to providing a direct connection to cities including New York City, Philadelphia, and Washington, D.C. the train brings new people into Claremont.

Concord resident Mitchel Weinberg, 39, was one of nine people waiting to board the Vermonter in Claremont. Weinberg, who was going to visit his friend in New York City, said he did not expect to find himself part of a local celebration.

“I literally looked at my work schedule, found a week that worked for my friend and had no idea this was the resumption of service day,” Weinberg laughed.

For Weinberg, travelling to Claremont to take Amtrak directly to New York City was more convenient than his option on the western side of New Hampshire, which requires taking a coach bus to Boston to connect with an Amtrak line.

Olga Bednarek, from Chicago, was returning to New York City after a visit with a friend in New Hampshire. Bednarek travelled up in a friend’s car but was looking forward to going back by train.

“I’m excited to take a long nap and read a good book,” Bednarek said. “I love a good train ride.”

The Vermonter has also become popular among cyclists, thanks largely to the Vermonter’s pilot program to store bicycles. This storage allows area cyclists to explore bike trails in Claremont or other Vermont towns as a day trip.

Claremont City Councilor Michael Demars, an avid cyclist, was among those boarding the Vermonter on Monday. With Amtrak offering a one day special of $1 rides to any station in Vermont, Demars decided to take his bike down to Bellows Falls, Vermont, for a day of recreation and exercise.

“There are five or six different routes that I ride a lot,” Demars said. “And I thought, for five bucks for the bike and a dollar for the ticket, I could jump off at Bellows Falls and ride home, for something different.”

Claremont has strived to market its recreational cycling offerings in part through Amtrak’s bicycle service. The Claremont train station shares its property with the Claremont Cycle Depot, a popular regional hub for bicycles, accessories and repairs.

Morris credited Rob Walker of Claremont Cycle Depot for coordinating a volunteer project to develop new mountain bike trails at Arrowhead Recreation Area and Moody Park, which have drawn the attention of mountain biking enthusiasts throughout the region.

Thanks to this project, Arrowhead will be hosting an Eastern States Cup enduro mountain bike race on August 21-22, which expects to bring approximately 200 competitors, said Morris.

“Since that announcement we have had people traveling here from all over the northeast,” Morris said. “So it is nice to welcome Amtrak back and think of the possibilities of people from states to the south of us, Vermont and hopefully Montreal soon, to be able to put their bike on a train, come to Claremont and enjoy those recreational opportunities.”

Bobby Graham, a spokesman for Democratic Sen. Maggie Hassan, said that officials overseeing the U.S.-Canada border has a site plan in place that will eventually allow the Vermonter to travel to Montreal, Canada. The plan was delayed by the novel coronavirus pandemic.

Hassan, in a statement read by Graham, called the Vermonter’s return to service significant, given its role in the region’s tourism economy and as a bridge to family and friends.

“As we come to the other side of the COVID-19 pandemic, the revival of the Vermonter service from Washington, D.C. to St. Albans, Vermont, is a positive sign of economic restoration that marks a return to normalcy,” Hassan wrote. “As more Americans return to traveling by train, I look forward to welcoming passengers as they explore New Hampshire’s vibrant economy, culture and natural beauty.”