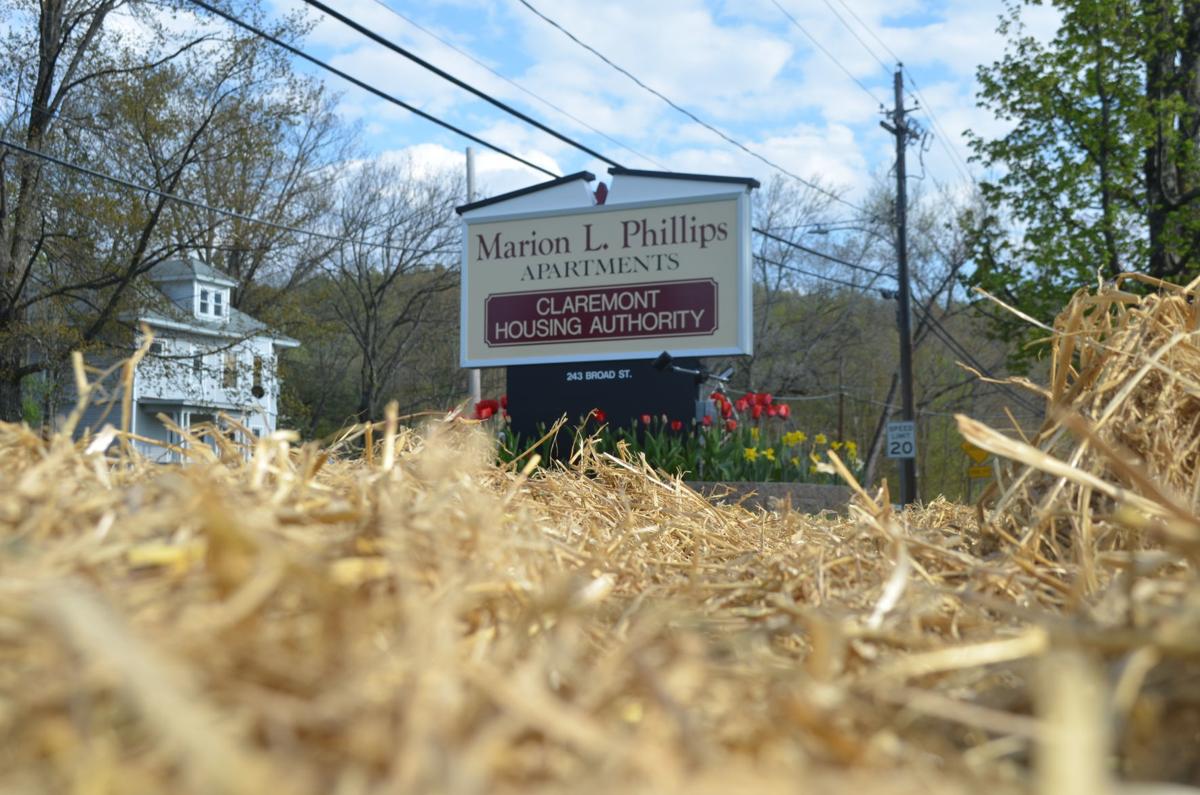 In this photo taken on Friday, May 15, 2020, a layer of hay can be seen covering where eight trees once stood in front of the Marion L. Phillip Apartments. 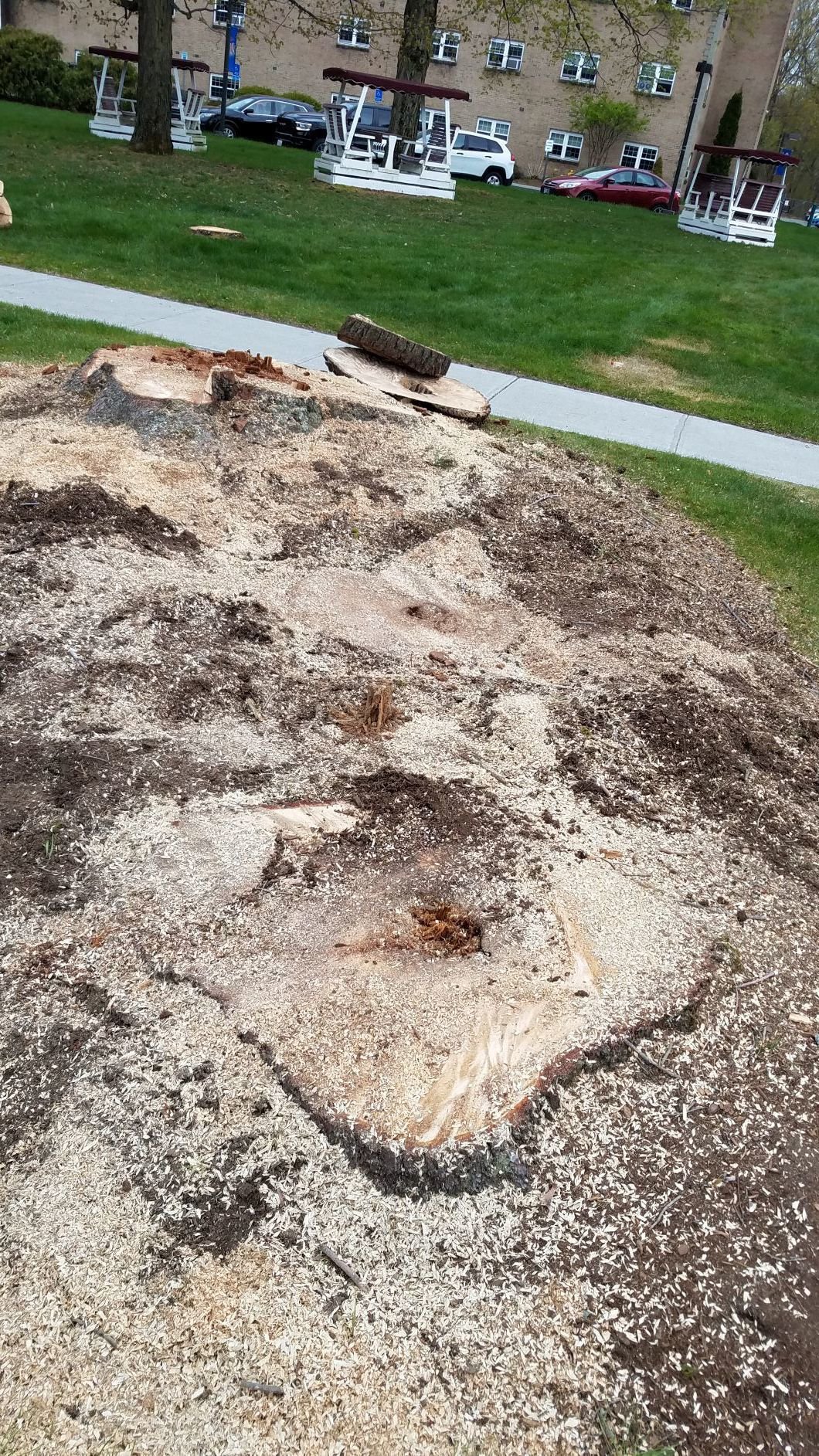 In this photo provided by Director of Public Works in Claremont Vic St. Pierre, the remains of three trees taken down in front of the Marion L. Phillips Apartments and hay can be seen.

In this photo taken on Friday, May 15, 2020, a layer of hay can be seen covering where eight trees once stood in front of the Marion L. Phillip Apartments.

In this photo provided by Director of Public Works in Claremont Vic St. Pierre, the remains of three trees taken down in front of the Marion L. Phillips Apartments and hay can be seen.

CLAREMONT — Some city residents still question the decision last week to remove several long-standing pine trees outside the Marion L. Phillips Apartments on Broad Street, which the Claremont Housing Authority had removed due to safety concerns.

“They could have lived a long time,” said Craig Avery, a longtime resident of the Marion L. Phillips Apartments, a 100-unit affordable apartment building for senior citizens and people with disabilities.

Avery sat with resident Bonnie Sczuka-Dodson, playing Scrabble, on the front lawn of the Marion L. Phillips Apartments. The landscape is noticeably different now than early last week. Five massive pines, three of which bordered Broad Street on the city’s right-of-way, were removed on Thursday, May 7, and Friday, May 8, as well as two hardwood trees.

According to Michelle Aiken, executive director of the Claremont Housing Authority that owns and operates the Marion L. Phillips Apartments, the pines were becoming a serious safety liability.

“We had some extremely large limbs fall this winter,” Aiken said. “One was so large it took three guys to remove it.”

Gallager removed a total of eight trees last week, on May 7 and 8. One tree was on an abutting property, which the neighbors gave permission to remove.

Some of the trees were removed due to concern of “blow-over,” according to Claremont Director of Public Works Victor St. Pierre, whose department was asked by the housing authority to remove the three city pines.

If one removes too many of the trees from a cluster, the few left standing are more susceptible to being knocked down by strong winds or storms, St. Pierre explained.

St. Pierre said that Aiken had requested permission from DPW to remove the three pines in the city’s right-of-way that bordered the Marion L. Phillips Apartments.

There are typically two reasons when trees in a right-of-way will be removed, according to St. Pierre. One is when they interfere with power lines. The other is when they endanger power lines.

Eversource said the trees were not a problem to their power lines, according to St. Pierre.

However, pines are not considered an ideal “landscape tree,” as their natural size and their susceptibility to storm or wind damage make them a safety concern when located by roads, St. Pierre said.

“If these trees were in a park, we wouldn’t have touched them,” St. Pierre said. “But pine trees along a well-walked [route] need to be completely safe. We err on the side of caution.”

Their huge stumps and lack of space between the trees indicated age and a potential lack of nutrients for their space, so St. Pierre decided to err on the side of caution and allow the housing authority to remove them.

“We look at a lot of trees that people want down,” St.Pierre. “As soon as they’re dead, they’re a huge cost to the city for tree management. So if [the property owners] want to take them down and put new ones in their place, we may give them permission.”

The exact number could not be determined. Aiken told the Eagle Times that “only one wasn’t rotted.”

“We were very lucky these trees were taken down, as they might have fallen from any bad storm,” Aiken said.

According to a concerned city resident Meg Hurley, who said she took photographs of the stumps before they were rooted out, only three of the trees had hollow trunks and that the pines on city property “had healthy cores.”

Hurley, in a letter to the editor in the Eagle Times, pointed out the cores with dead wood does not necessarily mean the tree is dying.

“All cores are ‘dead’ wood, which can rot and not impact their overall health,” Hurley wrote. “Trees can set up internal barriers and thrive, because a tree’s ‘living’ tissue is the outer layer beneath the bark, where water and nutrients and sap flow.”

Hurley questioned the lack of consultation with an independent arborist to determine whether these trees’ lives could have been prolonged, and the timing of this cut in May, when birds and other tree inhabitants are nesting or tending to offspring.

Sczuka-Dodson expressed a similar dismay about the loss of habitat for the animals that she and other residents used to enjoy.

Aiken said she aims to plant a smaller variety of trees, such as crabapple, as replacements.

Some residents expressed confusion about the reason for the tree removal, due to a city miscommunication.

On Wednesday, May 6, the city posted an online news announcement about the tree removal, attributing it to “the request of Eversource.”

The city based that information on an email sent by Assistant Director of DPW Jeremy Clay. Clay said yesterday that initially he was under the assumption that Eversource had ordered the tree removal. Later St. Pierre corrected his misunderstanding.