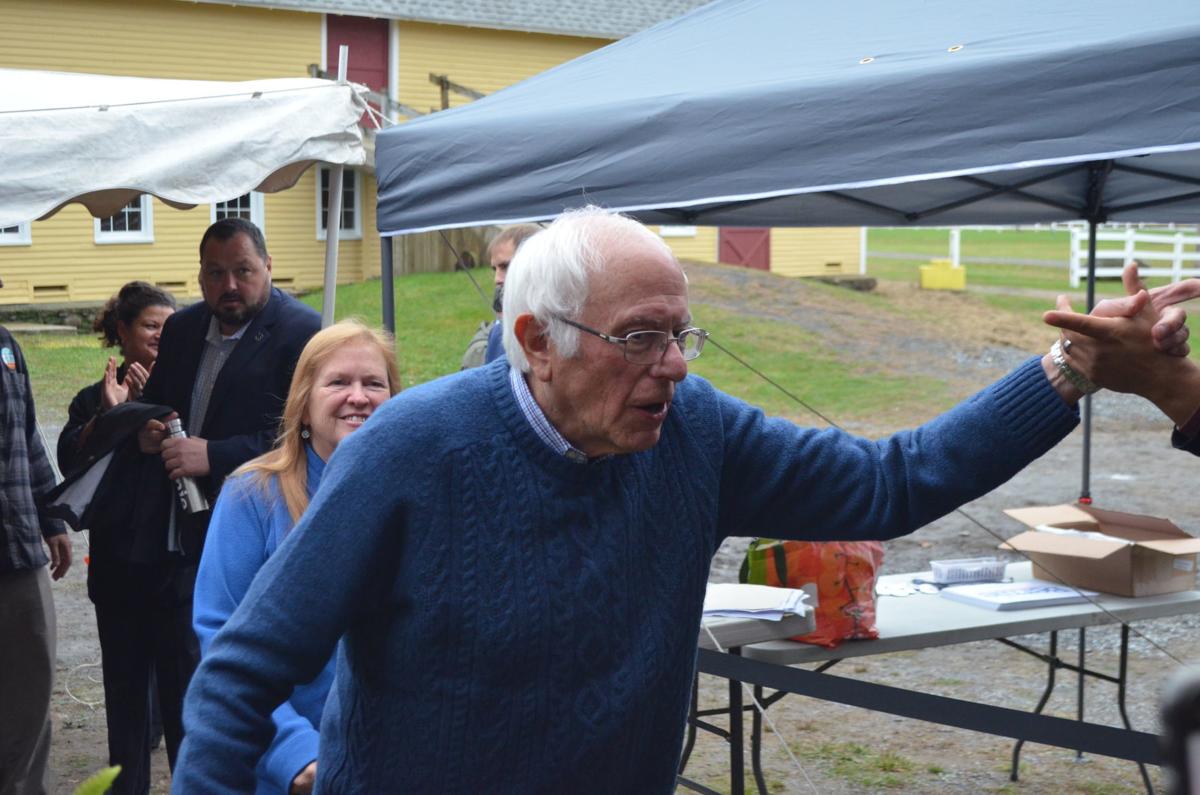 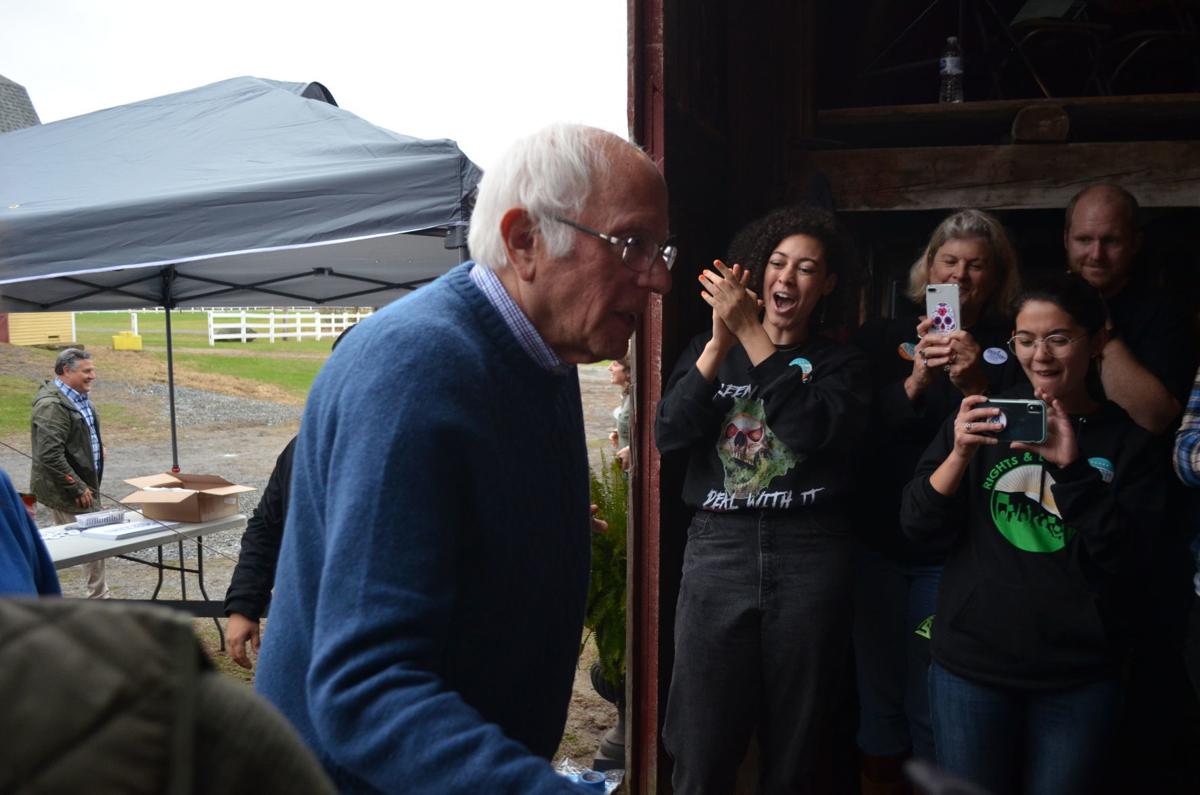 Local voters and members of the Rights & Democracy New Hampshire welcomed the Green Mountain State senator as he made his way into a barn draped with lights to discuss various policies, ranging from the Green New Deal to college affordability. 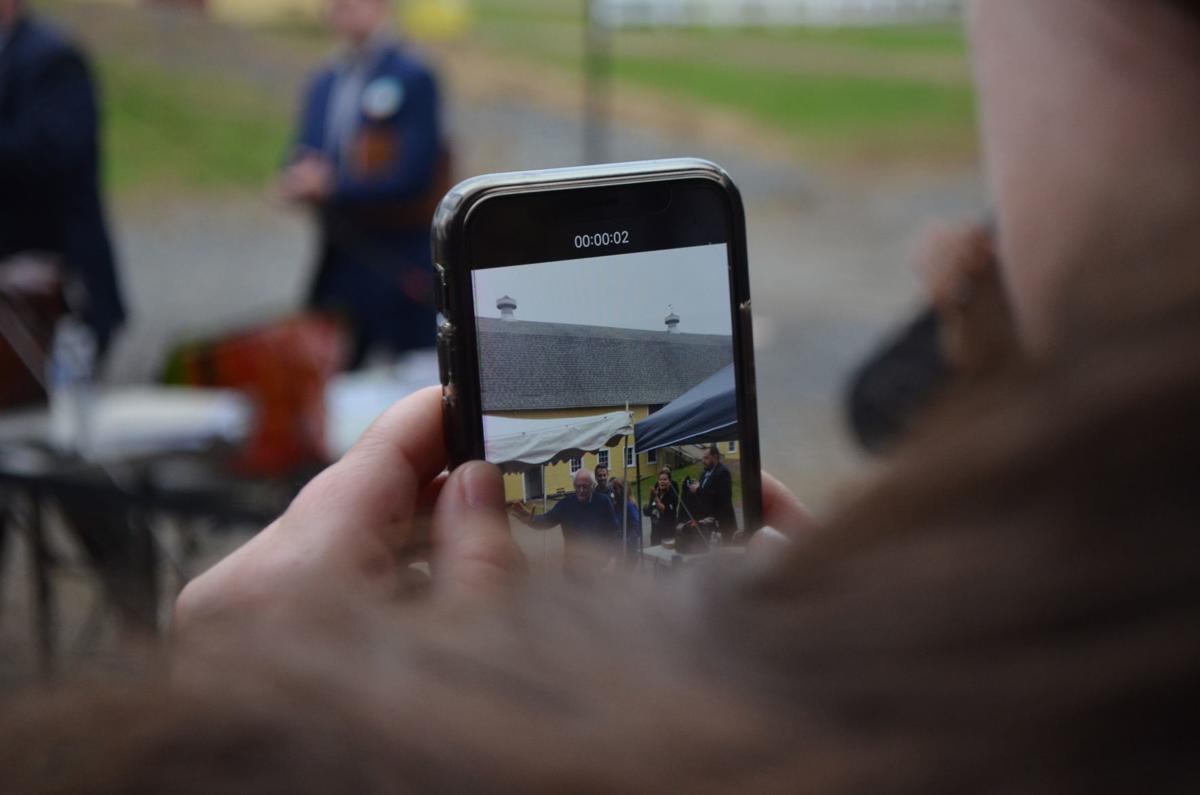 Democratic presidential candidate Sen. Bernie Sanders (I-Vt.) can be seen on this woman’s phone as she records him making his way to an event in Claremont Thursday hosted by the New Hampshire Youth Moment, People’s Action and Rights & Democracy New Hampshire.

Local voters and members of the Rights & Democracy New Hampshire welcomed the Green Mountain State senator as he made his way into a barn draped with lights to discuss various policies, ranging from the Green New Deal to college affordability.

Democratic presidential candidate Sen. Bernie Sanders (I-Vt.) can be seen on this woman’s phone as she records him making his way to an event in Claremont Thursday hosted by the New Hampshire Youth Moment, People’s Action and Rights & Democracy New Hampshire.

Sanders, who turned 78 in September, is campaigning to guarantee health care as a human right for all Americans, something the Green Mountain State senator has proposed in his single-payer Medicare for All Act of 2019 legislation.

However, Sanders, a sitting member of the US Senate Committee on Health, Education, Labor, and Pension (HELP), has yet to present an exact detailed plan of how to finance his proposal, one that fellow presidential candidates Sens. Cory Booker (D-N.J.), Kirsten Gillibrand (D-N.Y.), Kamala Harris (D-Calif.) and Elizabeth Warren (D-Mass.) have co-sponsored.

In addition to the Urban Institute and the Center for Health and Economy, the Committee for a Responsible Federal Budget (CRFB) have estimated the cost of Medicare for All to the federal government to be roughly $28-36 trillion.

Tanya Vyhovsky, a member of Rights & Democracy Vt. and People’s Action, asked the candidate what he will do, in collaboration with Medicare for All, to hold pharmaceutical companies and the medical industrial complex accountable for the lives lost.

Prior to responding to Vyhovsky’s question, the senator joked with an organizer to put down the time cards, saying, “It is going to take me awhile.”

“Not only is the pharmaceutical industry extraordinarily greedy,” Sanders said. “Last year, they made $69 billion in profit at a time when one-out-of-five Americans cannot afford the medicine their doctors prescribe.”

Looking toward his first term, if elected, as President of the United States, Sanders vowed to make sure collusion and widespread price-fixing in the medical industrial complex ceases.

“We will have an Attorney General that will go after them in a way they have never seen for ripping off the American people,” Sanders said. “[What the pharmaceutical companies have done] is criminal activity and we will hold those CEOs accountable.”

The conversation then switched to climate change and a regenerative economy when Laura Lynch, of Temple, a member of Rights & Democracy N.H. and People’s Action, asked Sanders about his policies to preserve the rights of communities to clean air, water and energy while transiting the country to a more sustainable economy.

“What [scientists] tell us is that if we do not act aggressively in transforming our energy system away from fossil fuel to energy efficiency, the planet we will be leaving our children, grandchildren and future generations will be increasingly unhealthy and uninhabitable,” Sanders said. “I have introduced the most comprehensive climate change plan ever introduced by any candidate for president.”

Sanders elaborated further. “This is a plan consistent with the Green New Deal. This is a plan that will create up to 20 million good paying jobs, as well tell the fossil fuel industry, in no uncertain terms, that their short-term profits are not more important than the future of our planet.”

Jubilee McGill, a young mother and Vermont member of Rights & Democracy and People’s Action, shifted the discussion to affordable and standard housing, incorporating her own personal experience of overcoming dangerous situations and bouts with homlessness to later become a college graduate and senior property manager for a nonprofit housing trust. McGill’s question was in regard to Sanders’ support of a national homes guarantee and an end to real estate and land speculation.

“At a time of massive income and wealth inequality, we are not going to give more tax breaks to billionaires and large profitable corporations, we are going to raise their taxes,” Sanders said. “And we are going to use some of that revenue to understand that housing is a human right. It is basically insane that tonight we are going to have half a million people either sleeping out in the streets or emergency shelters.”

Jess Falero, of Portland, Maine, and a member of People’s Action, added a follow up, asking what Sanders’ plan as president would be to prevent youth homelessness.

“It is not just a question of building low-income and affordable housing, which we must do,” Sanders said. “It is also providing the insulary social services that give people the hope and support that they need. Rebuilding our housing stock, building over 10 million new units of housing, ending homlessness in America for young people and for any other group of people is an enormously high priority for my administration.”

The event concluded with a final question on the topic of immigration and asylum policy in America.

Pablo, an asylum seeker and a member of the New Hampshire Youth Movement, asked how the Sanders Administration would rebuild the asylum system, especially for people from countries where US foreign policy have negatively impacted their homes.

“On Day 1, we will end the demonization of the immigrant community,” Sanders said. “We have a president who is trying to divide our people up… this is a president that will do exactly the opposite: bring our people together.”

Sanders continued. “On Day 1, we will provide the legal status to the 1.8 million young people eligible for the DACA program. We will move to comprehensive immigration reform and a path toward citizenship fowr the 11 million undocumented. And we will develop a humane border policy based on international asylum standards.”

Earlier in the day, Sanders held a rally in Concord moments after he filed for the first-in-the-nation primary.

OK - it's been over 24 hours since I posted a comment on this article. What happened to it?

And open borders - all foreigners can stroll into the country and start signing up for benefits.

Wow - what a great country.