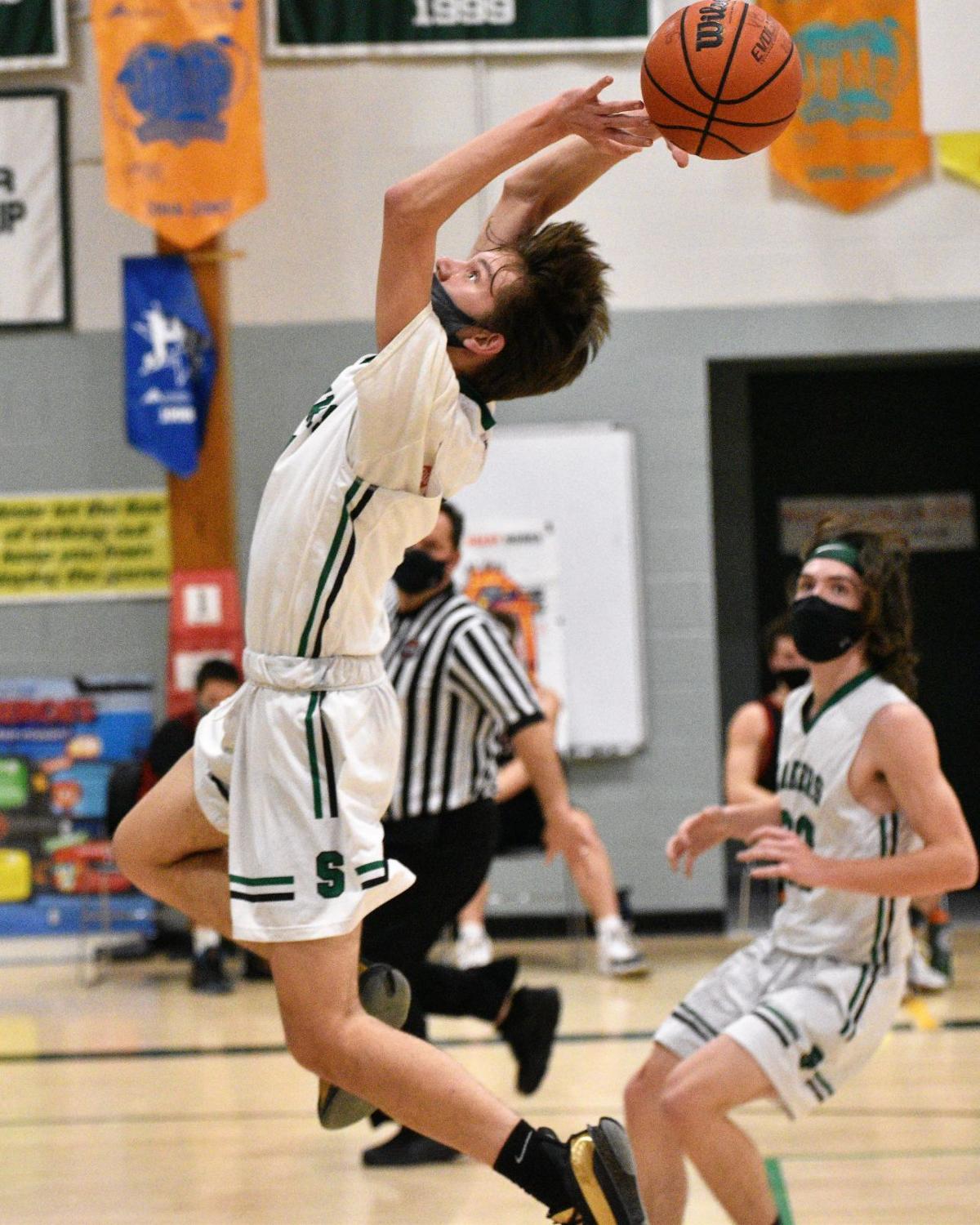 Austin Tschudin helped keep the Lakers ahead at the half with clutch shooting and solid rebounding from his guard position. 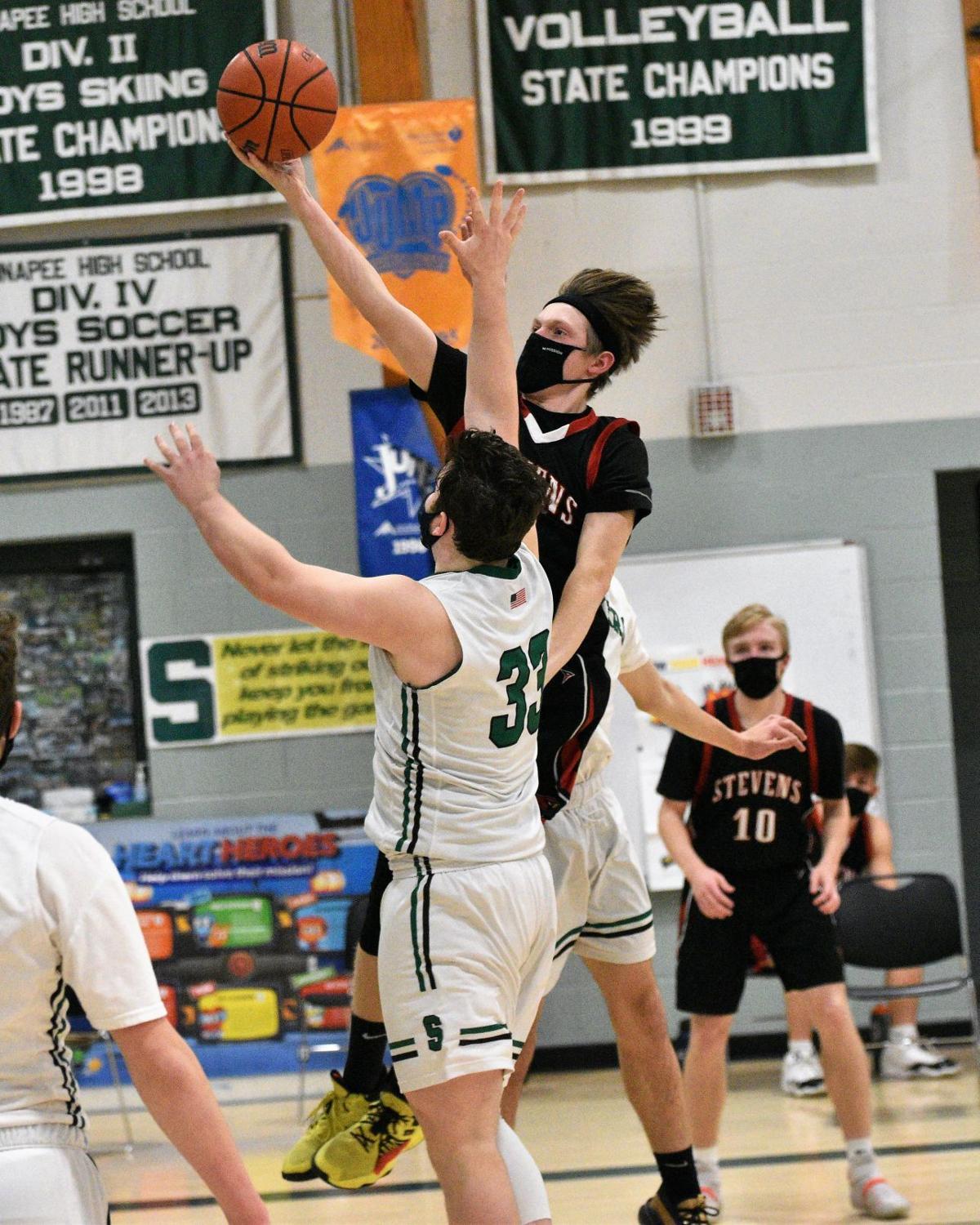 Clay Wadsworth poured in 21 points for the Cardinals including five 3-pointers on Monday, Feb. 15, 2021.

Austin Tschudin helped keep the Lakers ahead at the half with clutch shooting and solid rebounding from his guard position.

Clay Wadsworth poured in 21 points for the Cardinals including five 3-pointers on Monday, Feb. 15, 2021.

SUNAPEE — At times it was helter-skelter mixed with some rough board play while other moments revealed the truly outstanding and pure square-off between Stevens and Sunapee on Monday. Everything came down a late hoop and a last-second shot that just missed its target as a local rivalry in the making came down to the wire.

With Stevens in full rebuilding mode with first year head coach Ray Curran at the helm facing a seasoned Laker squad that has already played 11 games this season, the upstart Cardinals (0-4) looked for the upset.

The Lakers led at the break as neither team found a tempo as ragged play and cold shooting took center stage. Sunapee settled into a 2-3 zone for much of the half which opened up some space for Clay Wadsworth who drilled back to back three pointers to light a spark for Stevens as he suddenly had some swagger. For the first 16 minutes, Andrew Claus and Brady Moote were jumping out of the rafters with blocks and rugged rebounding with Brady picking up three fouls before the buzzer.

Stevens ripped off a 9-0 run early in the second half as Owen Taylor was a one man wrecking crew disrupting Sunapee penetration while Caden Ferland and Kayden LaClair were very active on the tip of the Cardinal defensive zone.

“Stevens was very quick to the ball tonight, we never found a tempo outside all night,” said Sunapee head coach Tim Puchtler.

Stevens would outscore Sunapee 21-7 in the quarter and were sky high heading into the final eight minutes as Wadsworth capped the scoring with a deep 3-pointer at the buzzer.

With no outside shots falling on the night, the Laker went to their inside game that featured Harper Flint who had been held scoreless on the night, so far. JJ Tursky gave Stevens their biggest lead on the night 41-30 with 6 minutes remaining then Flint went to work pushing defenders deep into the pant and squaring to the hoop for good looks at the rim.

“We started to go in and out with our passes and that opened the zone enough to get some one on one match-ups,” Flint said.

Ball movement was much improved on the Laker end as Flint’s hoop and free throw sliced the Cardinal lead to 41-35 with the Sunapee crowd in full support mode. As Sunapee began to get their mojo back, the Cardinals couldn’t buy a hoop as the Lakers were in the middle of a 14-0 run. Sean Moynihan’s jump shot for Sunapee cut the lead to four points and when Flint hit the next seven points in a row, the Lakers had grabbed the lead 44-41 with under a minute left.

After a Stevens timeout, Curren called a set play that featured Wadsworth and the senior sharp shooter drilled a three pointer and knotted things up 44-44 with time winding down as the “Sherb” was the loudest of any gym this season. A patient Laker squad looked for their shot and when Moynihan found the bottom of the net, Sunapee took a two-point lead with 15 ticks left on the clock. After a near turnover at mid-court, the ball ended up in the hands of Wadsworth with Flint, Moynihan and Claus all within an arms reach, Wadsworth fired up a three pointer from in front of the Cardinals bench for the win but missed the mark as the Lakers improved to 9-3 on the season in dramatic fashion.

“We were close, Sunapee is a very smart well coached team, I think we did a lot of things well tonight and with more time in the gym, we will improve,” said Curran after the game.

Flint led Sunapee with 12 points (all in the fourth quarter) while Moynihan ended with nine points. Austrin Tschudin would finish with seven points and Claus and Jacob Stoughton would each drop in six points. Drew Clifford and McHale Cahill would close out the Sunapee scoring with three points apiece.

For Stevens, Wadsworth led all scorers with 21 points. LaClair would drop in 11 points while Taylor ended the night with six points. Tursky’s hoop and Tursky, Ferland and Ty Theriault would all add a hoop.