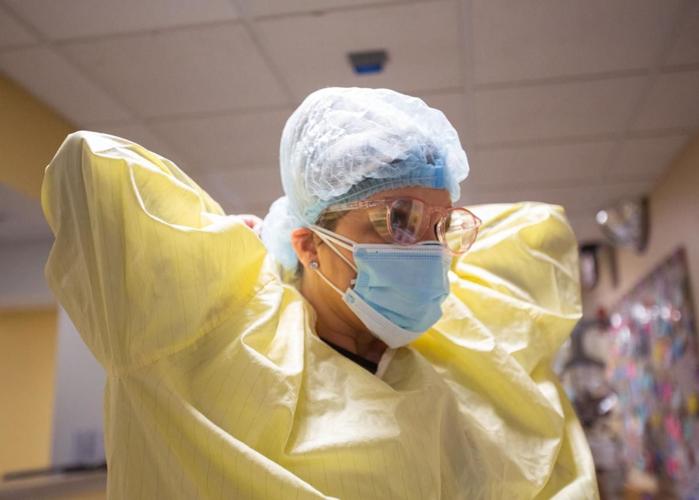 Andrea, an LNA who did not wish to share her last name, dons a gown to respond to a call in a patient’s room in the Thompson Unit at Cheshire Medical Center on Friday afternoon. 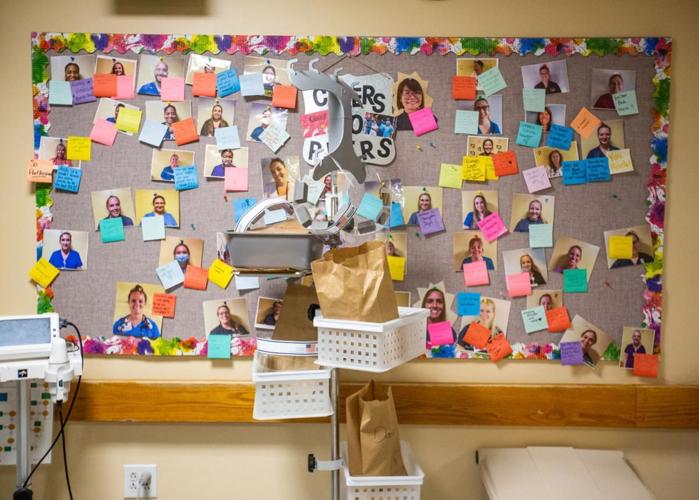 “Trees” that hold PPE gear, assembled for staff to place their gear once they leave a room and disinfect, are placed between rooms along the hallway in the Thompson Unit at Cheshire Medical Center in Keene on Friday afternoon.

Andrea, an LNA who did not wish to share her last name, dons a gown to respond to a call in a patient’s room in the Thompson Unit at Cheshire Medical Center on Friday afternoon.

“Trees” that hold PPE gear, assembled for staff to place their gear once they leave a room and disinfect, are placed between rooms along the hallway in the Thompson Unit at Cheshire Medical Center in Keene on Friday afternoon.

It’s the worst it’s ever been.

In the latest surge of the COVID-19 pandemic — resulting in the highest case and hospitalization totals across New Hampshire — Cheshire Medical Center is overflowing with the youngest and sickest patients to date.

Most of them are unvaccinated. Many don’t make it out of the ICU.

For medical staff of the Keene hospital, this is their new reality.

“It’s way worse. Way worse,” said Dr. Robert Westlake, medical director of pulmonary critical care at the Dartmouth-Hitchcock Health affiliate. “The volume, the intensity, is way worse ... I’ve never seen anything like [this] in my career.”

Cheshire Medical, like hospitals across the nation, has been grappling with the pandemic since it began nearly two years ago.

The same challenges have mostly persisted throughout — battling misinformation about the virus and its vaccines, dealing with short staffing and finding room for an influx of COVID-19 patients.

But in the latest surge, staff say it’s as if everything has been exacerbated.

Over the past two years, Westlake, 56, said the hospital has tripled its number of ICU patients. However, the ones he’s seeing now are “twice as sick as they were even nine months ago.”

As of Friday morning, the hospital had 23 inpatients with active COVID-19 infections and eight of them were on ventilators, spokeswoman Heather Atwell said.

An additional eight were considered “recovering,” meaning they are no longer infectious but still require hospitalization to recover from the virus.

Cheshire Medical has hovered around that number of inpatients for weeks now, breaking its own record last week with 29.

In the early stages of the pandemic, said Westlake — who has been in the medical field for over 30 years — a majority of those needing critical care for the virus were elderly.

“I’m struck by the cases that don’t go well. We lost someone in his 40s, a father of two, who was unvaccinated and died of respiratory failure,” Westlake said. “This shouldn’t happen. This disease is preventable. So that’s just gut-wrenching.”

Eric Lindquist, respiratory therapy manager at the hospital, said he went from getting one call per day to help with someone’s breathing before the pandemic to upward of 20, and that number continues to climb.

“We’re used to someone with an asthma attack coming in, and we have great medications, they’re treated for a couple days, and then they go home ...,” the 49-year-old said. “We weren’t quite used to people here for three, four weeks on a ventilator ... It was rare before and now it’s commonplace.”

Though it’s different for veterans like Lindquist and Westlake, for much newer staff members, the pandemic is the only medical environment they’ve known.

The 22-year-old said she had a bit of education on the novel coronavirus in nursing school, but it’s still been tough working in such an intense environment.

“It’s been insane seeing the surge of COVID moving from just our back five rooms having COVID [patients], and now it’s spread to probably 75 percent of our unit,” she said.

“It’s not just people’s grandmas and grandpas. It’s their aunts, their uncles, their parents. The youngest patient I had was 18 years old who had to be hospitalized due to COVID,” she said.

There are frustrations that come with that, too, she said.

“It’s really hard to continue to see people not get vaccinated and come in and have to help them then,” Alden said. “I’m more than happy to help them once they’re here, but it’s hard to see that misinformation out there.”

And while medical professionals are used to seeing worse-case scenarios, the amount of death they’ve seen throughout the pandemic — especially amid the current surge — is unprecedented.

“It’s been sad. It’s definitely been sad,” said Jennifer Clark, 40, the hospital’s nurse manager for the ICU. “It’s been a long two years and ... being that person that has to be there at the end of life, it’s hard. You take that home with you, and you think about that for a long time. It doesn’t go away.”

Noah Clay, a registered nurse in the ICU who started in May 2020, echoed Clark, saying being with patients for their final moments is nothing he could’ve prepared for.

“I never anticipated starting out in the great field of nursing and having to experience so much death ...,” the 24-year-old said. “Having to say the last words of a family member is something you don’t really want to do.”

But even after the heaviest of days, the staff only have one choice — to keep going.

This article is being shared by a partner in The Granite State News Collaborative. For more information visit collaborativenh.org.