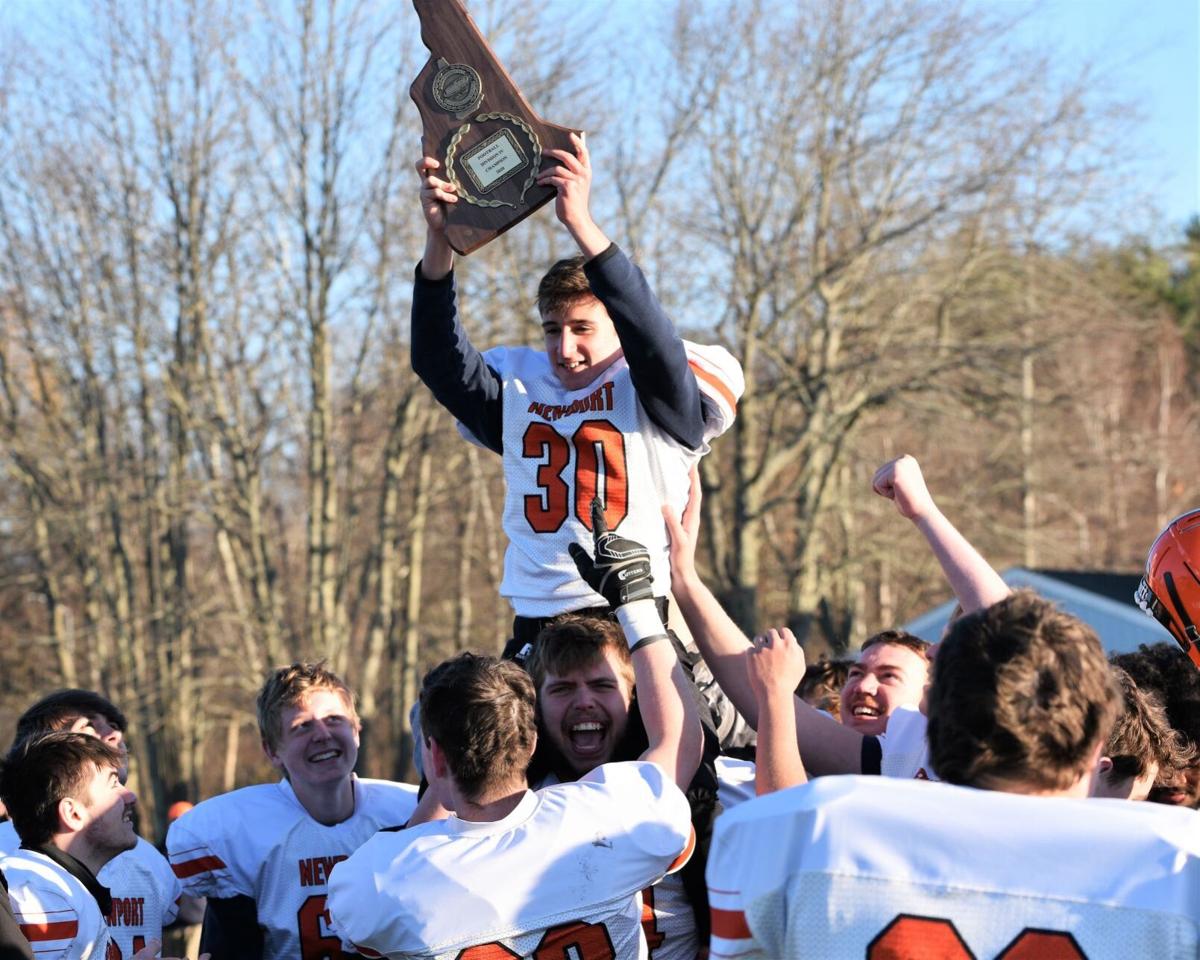 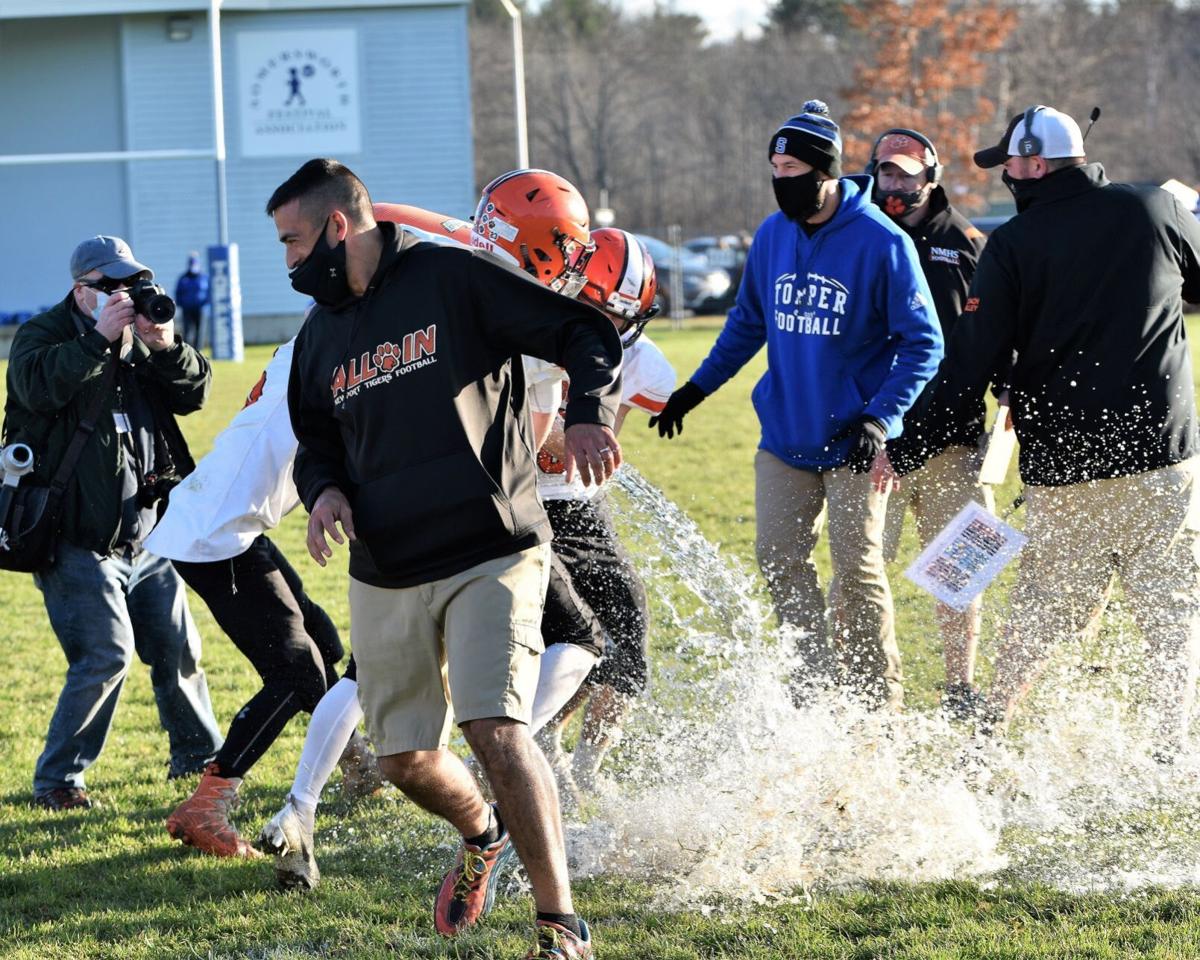 John Proper just escapes a celebratory shower from his team after winning the championship on Saturday, Nov. 14, 2020.

John Proper just escapes a celebratory shower from his team after winning the championship on Saturday, Nov. 14, 2020.

SOMERSWORTH — The Newport Tigers capped off their championship season with a dominating performance on Saturday and were welcomed back home with a parade with every Newport fire engine and police car leading the way through the downtown streets lined with cheering fans.

The Somersworth home field didn’t have much of an advantage as Newport fans outnumbering the Toppers crowd by at least a 2-1 margin and a flyover from Newport’s Heath Marsden, made it feel like the championship day belonged to Newport from the start.

On the opening kickoff, Ryder Lovely recovered a Somersworth fumble and 36 seconds into the game Marius Edwards was standing in the end zone after a 24-yard sweep right for the first score of the day.

“We didn’t change anything today, we went with what brought us here and stuck with it,” said Newport head coach John Proper.

Newport would get the ball right back after a quick three and out by the Toppers in large part to a defense that was just quick off the ball and pursued in waves. A crushing hit compliments of Josh Sharron forced a punt giving Newport possession on their own 4-yard line.

The Newport ground game was all revved up as Jagger Lovely, Sharron and Edwards all ripped off chunks of yardage while Chase Hamilton’s acrobatic grab pushed the Tigers down to the 11-yard line. Edwards would follow his blockers on the left side and found pay-dirt for the second Tiger score that capped off a 96-yard drive that took nearly nine minutes putting Newport ahead 12-0.

“Today was what we wanted all year, we wanted it since the first day of practice,” said Edwards after the game.

The defensive line of Newport was just like wrecking ball all day as Josh Orlowski, Adriano Urista and Dylan Carpenter were just immovable objects for Somersworth. Once line play was neutralized, the likes of Sharron, J. Lovely, Devin Heino and Caleb Turgeon were in the backfield laying some heavy licks on the Somersworth runners with gang tackling and hits that lifted the Toppers off the ground completely.

Newport had the ball to start the second quarter and this drive lasted nearly five minutes and resulted in a Bryce Willey 17-yard blast while Sharron’s two-point conversion made it 20 to zip. With Somersworth getting nowhere on the ground, they decided to try and air it out but Karter Pollari had other thoughts and his interception snuffed out that Topper drive. On the next Topper drive, a vicious hit by Orlowski jarred the ball loose as Heino pounced on the pigskin. J Lovely would grind it in with a 14-yard run for a touchdown as Newport would head into the half leading 28-0.

“The line was just remarkable today as it has been all season, they made some big holes and opened things up for the running backs today” said Lovely after the game.

Newport received the kick to start the second half and after plowing ahead with the ground game, Edwards went to the air to Sharron down the Tigers sidelines. Sharron had a step on the defender and got a hand on the pass but bobbled it four times covering 10 yards, when he finally got both hands on it for the catch, the 45-yard touchdown pass gave the Tigers a 36-0 lead with the championship title in sight.

J. Lovely would cap off the scoring on the day as he ended the game with 102 yards rushing and two touchdowns. “Our team has the speed and power to play well and with a few misdirection plays, we ended the season just how we wanted to” said Lovely after the game.

With the JV groups getting a taste of a championship game on the field, J. Lovely, Sharron and Willey were in the back of the pack readying the water cooler ready to pour over Proper. The only mistake made on the day came at the hands of these three as Proper made a move out of harms way as the shower missed it’s intended target as the championship celebration had begun.

“I knew they were up to something and I had an eye on them,” Proper said.

“This is an incredible feeling, we are a family and we’ve been playing together for so long, we are all so happy to have had the opportunity to not only play this year but bring home a championship to Newport is very special,” said Sharron after the game.

Newport won it’s last football championship in 2015 and Proper couldn’t be happier to add to that total. “This years schedule really prepared us for what was ahead. The Lebanon game was a big test and after that game I thought we had a good shot to be in this game today. Myself and the entire coaching staff has coached these kids since 2/3 peewee and we had a feeling back in August that this might be a special year. We had a 2-3-4 headed running monster this year plus the senior class has stuck together for so long, it just was the perfect way to end the season” said Proper.

“This is just insane,” said Tommy Spiker after the game.

“This line was so close and communicated so perfectly all season, I can’t wait for next year,” said Spiker as he will join nearly 30 players looking to defend this years title.