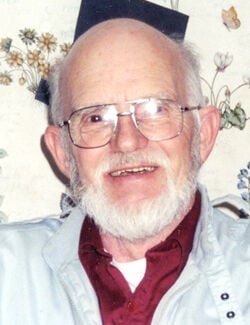 Carleton U. LeDrew Sr. CHARLESTOWN — Carleton U. LeDrew Sr., 90, of Charlestown, known affectionately by many as “Captain Carl,” passed away peacefully on June 6, 2022, surrounded by his family. Carleton was born in Randolph, Vermont, on April 29, 1932, to Lester and Laura (Bowman) LeDrew. He grew up in West Brookfield, Vermont, where he attended a one-room schoolhouse until fourth grade when his family moved to Springfield, Vermont. Carleton graduated from Springfield High School in 1951. He enjoyed staying in touch with his classmates throughout his life, attending class breakfasts and participating in alumni parades. After high school, Carleton enlisted in the military. He served in the Army from 1952 to 1955 and the Army Reserves from 1955 to 1963, achieving the rank of Staff Sergeant. During his time in the Army, he was stationed in Germany where he worked with the Boy Scouts and was able to travel throughout much of Europe. He often shared stories from his time abroad. Carleton married Jean D. Neilsen on Oct. 19, 1957, and together, they had four children, Carla, Keith, Richard and Carleton “Boomer” Jr. With the help of his father and brothers, Carleton built a home for his family on Lovers Lane Road in Charlestown where he lived for over 60 years. His door was always open and he and Jean made countless people feel at home there. After working as a machinist for 38 years, Carleton retired from Fellows Gear Shaper Co. in Springfield, but his proudest venture was his bicycle shop. Carleton opened Lane Road Cycle Shop out of his home in 1971 and quickly became known around Charlestown and far beyond as “the bike man.” He loved sharing his knowledge of bicycles and was a skilled repairman. Though his generosity undoubtedly cost him some profits over the years, his expertise and kindness gained him many loyal customers. Ultimately, Carleton ran a successful shop for over 50 years. Outside of his work, Carleton was always on the go. When his children were young, he enjoyed coaching Little League and going on family camping trips. Later in life, he was an avid casino goer and loved traveling, especially taking road trips out west to visit his brother and other family. Carleton loved his family deeply and was endlessly giving. He was always willing to lend a hand and had an excellent sense of humor. He will be missed immeasurably. Carleton is survived by his daughter, Carla MacDonald and her husband, Bill, his son, Keith LeDrew, his son, Richard LeDrew and his wife, Anne, all of Charlestown; seven grandchildren, Allisia MacDonald, Jenna MacDonald, Leah (LeDrew) Gendron, Kara MacDonald, Erin LeDrew, Zachary LeDrew and Benjamin LeDrew; one great-granddaughter, Charlotte MacDonald Fellows; and several nieces and nephews. He was predeceased by his wife, Jean; his son, Boomer; and his brothers, Donald and Winston LeDrew. Family and friends are invited to attend a graveside service to be held in the Pine Crest Cemetery in Charlestown on June 14, 2022, at 11 a.m. followed by a celebration of Carleton’s life at the VFW in Charlestown. In lieu of flowers, please consider making a donation to the Claremont Soup Kitchen or the Fall Mountain Food Shelf in his honor. Arrangements are with Stringer Funeral Homes and Crematorium, 146 Broad St., Claremont, NH 03743. To view an online memorial or send a private message of condolence, visit www.stringerfh.com.