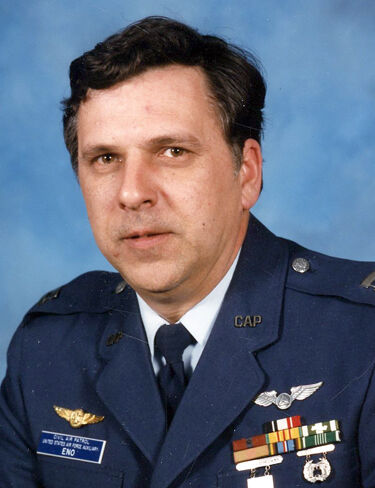 David A. Eno CLAREMONT — David A. Eno, 80, reluctantly passed away on July 2, 2021, after a courageous fight against cancer. David was the son of John and Alice (Descoteau) Eno, born in Claremont on March 18, 1941. He grew up attending St. Mary’s School, active in Cavalier Drum & Bugle Corps. After graduation in 1959, he attended New Hampshire Technical Institute in Portsmouth. After completing a semester, he left to join the U.S. Marine Corps Aviation program, serving on land and sea from 1960-1966. While on leave, Dave was reacquainted with the girl down the street; a year later, Janet Mower and Dave were married. Dave worked at Joy Mfg. Engineering Dept. until layoffs, then onto Metropolitan Life as an agent, and finally in the tire business with Goodyear at Cannon Tire. He was active in sport car events, winning first place in class at Mount Ascutney Hill Climb, then went into oval track racing, mini modified class, then late model sportsman, and finally modified, owner and driver of the #72 modified. After 12 years of racing, Dave went back to flying, as a mission pilot for the Civil Air Patrol, flying search and rescue, drug intervention and forestry survey. He was a Squadron Commander with rank of Lieutenant Colonel, retiring after 24 years of service in the U.S. Air Force Auxiliary. Over that period, Dave served on the Claremont Airport Advisory Board for 20 years, competed in pistol leagues as a marksman, shot cowboy action shooting and skeet. Dave was a member of the American Legion, VFW and the Claremont Country Club. David and Janet had two children, Karl Eno, of Saxtons River, Vermont, and Laura (Eno) Kennell, of Keene; three grandchildren, Michael Eno, Lydia Kennell and Vincent Kennell. David and Janet were married for 55 years. He is survived by his brother, Victor Eno and wife Bonnie, as well as nephews; and predeceased by his parents and sister, Margaret (Eno) Nelson. David will be missed by his family and friends. Visiting hours will be held at Stringer Funeral Home, 146 Broad St. in Claremont, on Thursday, July 8, from 5 to 7 p.m. A Mass of Christian burial will be celebrated at St. Mary’s Church in Claremont on Friday, July 9, at 11 a.m. Burial will follow in Mountain View Cemetery. Arrangements are with Stringer Funeral Homes and Crematorium, 146 Broad St., Claremont, NH 03743. To send a private message of condolence, visit www.stringerfh.com.