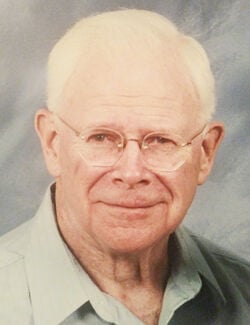 David C. Jennings CHARLESTOWN — David Carl Jennings, 95, of 166 East St., died peacefully Nov. 5, 2020, at his home. He was born Feb 19, 1925, in Springfield, Massachusetts, to Carl Maurice and Helene Monica Gallagher Jennings. He attended schools in Burlington and Montpelier, Vermont, and Rensselaer Polytechnic Institute. He served in the U.S. Army 104th Division Timberwolves 1943-1946. He worked primarily at Hamilton Standard Division, United Aircraft where he was involved in the Apollo spacesuit project. He enjoyed flying his Taylorcraft airplanes and giving rides to friends and family. On Aug. 29, 1949, he married Eleanor Louise Joyal. They raised five children. Joseph, Chris, Terri, Paul and Pete. They had 10 grandchildren. Services were held at St. Catherine Catholic Church in Charlestown on Tuesday, Nov. 10, 2020, at 10 a.m. Graveside services were in Fairview Cemetery in Hardwick, Vermont, on Tuesday, Nov. 10, 2020, at 2 p.m. In lieu of flowers, a memorial has been established for Food for the Poor Inc., 6401 Lyons Road, Coconut Creek, FL 33073 (954) 427-2222.