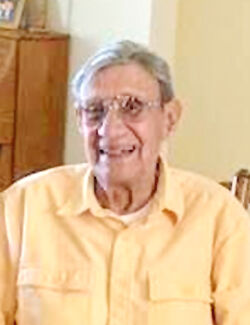 David T. Henry CHARLESTOWN — David Thomas Henry, 92, of Charlestown, New Hampshire, passed away on April 1, 2021, after a brief illness. David was born on March 12, 1929, to Gladys Chenoweth and Maurice Henry in Springfield, Vermont. After graduating from Springfield High School in 1948, he went on to study Pharmacy at Massachusetts College of Pharmacy. After graduation, David joined the Army and was stationed in Paris, France, where he was a surgical technician. Following his two years of service, David worked for Kent’s Pharmacy in Springfield, Vermont. In 1954, David married Katherine at the Unitarian Universalist Church in Charlestown, New Hampshire. Following their wedding, they moved to Brandon, Vermont, where David worked for Brown’s Pharmacy. In 1960, David and his family moved to Charlestown, New Hampshire, where he purchased Kendall’s Pharmacy, later named Henry’s Pharmacy. The pharmacy employed many of the town youth over the years to work at the soda fountain and as clerks in the store. David was a pillar of the Charlestown community. He served as the town health officer for a number of years, spearheaded Splash Days to raise money to construct a large outdoor swimming facility, was a trustee for the Unitarian Universalist Church, a director of Connecticut River Bank, and announced many Charlestown Homecoming Parades, including a parade honoring Carlton Fisk, when Carlton was inducted into the Baseball Hall of Fame. After retiring in 1991, David spent time traveling with Katherine. He enjoyed spending time with his family and many close friends. Spending time with his grandchildren and great-grandchildren was one of his greatest joys. David was predeceased by his wife, Katherine; brother, Joe Henry; sisters, Janet Henry and Polly Remmington. He is survived by his daughter, Marcia Henry, son, Steven Henry and wife Fran Henry; grandchildren, Heather Kinsey and husband Matthew Kinsey, Heidi Allen, Stefanie Henderson and husband Ryan Henderson, Craig Henry and wife Christina Henry. He was blessed with eight great-granddaughters, Katherine and Charlotte Kinsey, Delaney and Piper Allen, Anna Henderson, Harper, Emery and Lillian Henry. There will be a private graveside service at a later date. Arrangements are with Stringer Funeral Homes and Crematorium, 146 Broad St., Claremont, NH 03743. To view an online memorial or send a private message of condolence, visit www.stringerfh.com.