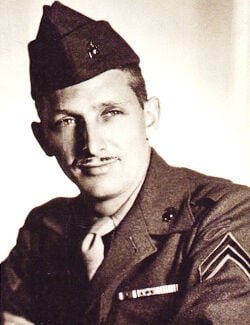 Donald Francis Kinson CHARLESTOWN — Donald Francis Kinson, 90, formerly of Charlestown, New Hampshire, passed away July 25, 2020, at the New Hampshire Veterans Home in Tilton. He was born Nov. 26, 1929. Don served in the United States Marines during the Korean War, November 1951 to November 1953, attaining the rank of Sergeant. Don earned the Korean War Service Medal with two stars, UN Service Medal, Letter of Commendation with Valor and the National Defense Medal. Don was a member of the American Legion, Vergennes, Vermont, and a life member of the First Marine Division Association. Jan. 22, 1954, he married Barbara Lee Ripley. They raised four sons together. They resided in Charlestown most of their lives. Don worked many jobs throughout his life from picking up milk from local farms and delivering to the creamery in Bellows Falls, to carpentry work. Don retired from MPB Corp., Keene, New Hampshire, in 1988. Don traveled during his retirement and after a road trip to Alaska, he volunteered for the U.S. Forest Service in Rochester, Vermont. While in Rochester, he built many trails and bridges for these trails. He was a major contributor to the Rochester, Vermont, Forest Service build. Don was preceded in death by nine brothers and sisters; his parents, Nathaniel and Eloise (Harris) Kinson; and a grandson, Benjamin Kinson. He is survived by wife and partner in life, Barbara; his sons, Donald and wife Lynne of Hayden, Idaho, Kenneth and wife Mary E. of Charlestown, Tony and wife Mary C. of Charlotte, Vermont; grandchildren, Kara, William, Kimberly, Leslie, Breanna, Katie; five great-grandchildren; and many nieces and nephews. Memorial service will be held in Pine Crest Cemetery in Charlestown on Friday, July 31, at 10 a.m. for family and friends. A reception after the service will be held at the home of Ken and Mary, 8 Stonebridge Road, Charlestown. In lieu of flowers, a memorial contribution can be made to the Eloise Kinson Memorial Fund, Silsby Library, P.O. Box 307, Charlestown, NH 03603; or to the Activities Fund New Hampshire Veterans Home, 139 Winter St., Tilton, NH 03276. Arrangements are with Stringer Funeral Homes and Crematorium, 146 Broad St., Claremont, NH 03743. To view an online memorial or send a private message of condolence, visit www.stringerfh.com