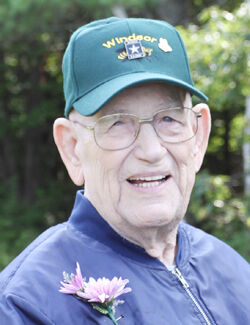 Donald "Muggs" Monette CORNISH — Donald “Muggs” Monette, 90, of Cornish, New Hampshire, died at the VA Medical Center, White River Junction, Vermont, on Nov. 20, 2020, of natural causes. Donald was born May 14, 1930, to Louis and Edith Monette, in Windsor, Vermont. He married his high school sweetheart, Pauline “Polly” Tierney, in 1951, going on to have six sons, Steven, David, Michael, Peter, Joseph “Joe” and William “Billy.” A 1948 graduate of Windsor High School, Donald joined the Vermont National Guard in 1947 and worked at Goodyear until he was called to active duty during the Korean War and served overseas for two years. After returning, he served in the Guard full time until retiring in 1981 as a Sergeant First Class. He then worked at F.W. Webb Plumbing and was a member of the Cornish Zoning Board of Adjustment and Cornish Conservation Commission. Donald enjoyed hunting and fishing and sharing these pastimes with his family and friends. He was a lifetime member of the Windsor American Legion and VFW. After retiring, he enjoyed genealogy, tracing his family back to 1700s France, and he followed many different high school sports, especially the Windsor High School baseball, basketball and football teams. Donald was predeceased by his wife, Polly; and his son, Joe. He is survived by his sons, Steven of Enfield, New Hampshire, David and his wife Maria, Michael and his wife Robin, Peter and Billy, of Cornish, New Hampshire; and grandchildren, Christopher, Joshua, Daniel and Montgomery Monette and Shaylee Briggs, as well as three great-grandchildren; and numerous nieces and nephews. A graveside memorial service will be held at a later date when the warm weather he loved has returned. Arrangements are with Stringer Funeral Homes and Crematorium, 146 Broad St., Claremont, NH 03743. To view an online memorial or send a private message of condolence, visit www.stringerfh.com.