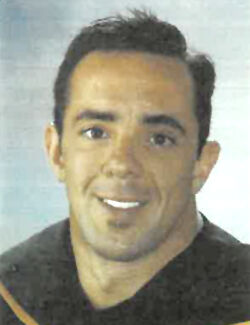 Dr. Scott A. Jacques NEW SMYRNA BEACH, Fla. — "Larger than life" would describe Scott Alan Jacques who passed away on Tuesday, April 13, 2021. Scott was born in Claremont on Aug. 15, 1967, to Yvon "Frenchy" Jacques and Susan Bennett Jacques. He was the first of three sons. Scott attended St. Mary's School until he graduated from the eighth grade at which time he began high school at Stevens High School, Claremont. Scott played soccer, football, and starred in Arsenic and Old Lace in his senior year. Scott loved adventure and trying new things. He had many friends whom he visited when he came back home to Claremont. Scott graduated high school and attended Keene State University for one year. During that time, he majored in rugby and amassing parking tickets. Following that, in 1988, he joined the U.S. Navy and became a Medical Corpsman, a Deep Water Diver and a Deep Sea Tech. His love of the Navy never ended and he benefited from the services provided by the Veterans Hospital located in St. Petersburg, Florida. He attended the University of Florida (Go, Gators!), in Gainsville, Florida, and graduated on May 6, 2000, with a Doctor of Pharmacy degree. He worked at pharmacies around Florida and enjoyed interacting with patients and physicians, always up for the challenge of how to best serve the patient. He recently joined the staff of Progressive Medical Research in New Smyrna Beach, Florida, and worked as a medical researcher. Scott wanted to climb Mount Kilimanjaro, a dormant volcano located in Tanzania, Africa, and did so in December 2020. He spent New Year's Eve at the top. He was an avid motorcyclist and had just purchased a Harley Davidson. Scott rode from the time he was 16. He loved boxing, MMA, music, hanging out with his friends, being with his family, reading, the Patriots and the Gators. Scott was twice written about in the Eagle Times; the first when he wrote "People Of A Certain Age" and then when he was featured in an article about his Kilimanjaro climb. He is survived by his girlfriend, Michelle Tinker, who was a former high school classmate and of whom he said "I've had a crush on her since we were in kindergarten." They lived together in New Smyrna Beach. Also surviving are his parents, Susan and Larry White and Anne Jacques, all of Claremont; his sisters, Cindy Musial, Tampa, Florida, and Lynn Davis, Manchester, New Hampshire. He is survived by brothers, Spencer Jacques, Accomack, Virginia, Bradley Jacques, Claremont, and Greg White, Zephyrhills, Florida. Survivors also include Scott's aunt and godmother, Shelley Parkhurst (Gary), Charlestown, Aunt Stacee Theroux (Paul), Claremont; and Scott's uncle and godfather, Steven M. Bennett, Claremont; additionally, nieces, Tori Jacques, Claremont, and Whitney Jacques, Arkport, New York, and nephews ,Hayden Musial, Tampa, Florida, Noah Davis, Manchester, and Adric White, Zephyrhills, Florida. Scott had one great-nephew, Ridley Landry, of Claremont. Scott also enjoyed a special relationship with his cousin, Skylar Bennett, Concord, New Hampshire. Scott was predeceased by his father, Yvon "Frenchy" Jacques, and Scott's best-dog-ever, Shakes. Because of his love for animals, contributions in Scott's memory can be sent to Lost My Way (animal shelter), 22 Hartford St., Claremont, NH 03743; or New Hampshire Humane Shelter, P.O. Box 111, Claremont, NH 03743; or because of the medical assistance he received from the VA, please send contributions to Bay Pines, Post Fund 1004, P.O. Box 5005, St. Petersburg, FL 33745. Please note any donation should indicate in memory of Scott Jacques. A military service will be held on Aug. 14, 2021, at 1 p.m. at Stringer Funeral Home with a celebration of his life to follow at the Elks Hall in Claremont. Scott's ashes will be placed later at the convenience of the family, in the Veterans Memorial Cemetery Boscawen, New Hampshire. Scott's mantra was "alive in the moment" and he would like us all to remember and try to practice this. Life is short and Scott will be missed by many; his never-ending smile is gone but will never be forgotten. Anchors away.