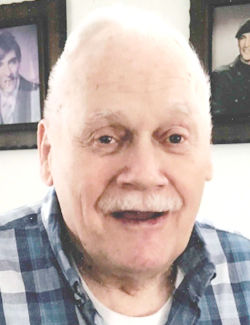 Hazelton A. Sargent, Jr. St. JOHNSBURY, Vt. — Hazelton Arthur Sargent Jr., 81, of Caledonia Street in St. Johnsbury, Vermont, passed away on Tuesday, Feb. 4, 2020, at Northeastern Vermont Regional Hospital, after a period of failing health. Hazie was born in Jay, Vermont, on Aug. 10, 1938, to Rena I. (Jewett) and Hazelton A. Sargent Sr. He was raised in Jay and attended local schools, graduating from North Troy High School, Class of 1956. Hazie served in the Army from 1961-1963 stationed at Fort Dix and Fort George Meade. On April 12, 1974, he married Jean Elva Wilber. In 1980, the couple moved to Ascutney, Vermont, where Hazie worked at Jones and Lamson in Springfield. He obtained his Master Electrician License and in 2008, moved to this area and began H&J Electric. Enjoying camping, Hazie and Jean took their RV all over Vermont and the rest of New England. Hazie also enjoyed playing horseshoes, badminton and cards, especially cribbage. He liked deer hunting, square dancing and round dancing. He always kept a garden. Survivors include his wife, Jean Sargent of St. Johnsbury; three daughters, Louise Monty and Theresa Dimick with husband Robert of St. Johnsbury, and Marie Dimick with husband James of Cabot, Vermont; three sisters, Phillis Furkey and husband Jerry, Rachel Oluett and husband George and Gloria Dean and husband Richard; a sister-in-law, Betty Sargent; many nieces and nephews; and lots of grand-dogs and grand-kitties. He was predeceased by his son, Stephen C. Monty; and a brother, Dwayne Sargent. Services will be at the convenience of the family. Charitable donations may be made in Hazelton’s name to Caledonia Home Health and Hospice, 161 Sherman Drive, St. Johnsbury, VT 05819; or St. Johnsbury Fire Department, 1187 Main St. #3, St. Johnsbury, VT 05819; or Calex Ambulance Service, 1485 Hospital Drive, St. Johnsbury, VT 05819. Memories and condolences can be shared with the family at www.saylesfh.com.