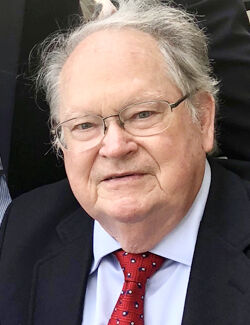 James S. Winn WEATHERSFIELD, Vt. — It is with a heavy heart that we share the passing of James S. "Jim" Winn, of Weathersfield, Vermont, and Rotonda, Florida, on April 13, 2021. James was born April 14, 1940 to James J. and Alice (Cebula) Winn in Winchester, Massachusetts. Jim is survived by his wife of over 53 years, Margaret "Peggy" Cook Winn; his daughter, Sarah "Sadie" Winn Peyser and son-in-law Hagen Peyser of Carmel Valley, California;, his son, James "JJ" Winn and daughter-in-law Farrel Simpson of South Dartmouth, Massachusetts; and granddaughters, Georgia and Charlotte Winn of Hartford, Vermont; as well as his sister, Georgia McGurl of Sarasota, Florida, and her family. Jim was the longtime owner of laundromats in Springfield and Windsor, Vermont, and a longtime fixture of the local business communities. He was supported by a wonderful team of people who made his frequent stays in Florida possible. An avid golfer, Jim was a member of Crown Point Country Club for decades and loved spending Saturdays and weeknights in the summer playing golf with his dear friends. Despite a woeful putting game that inspired him to craft his own putters using a blast furnace, he was the Crown Point Club Champion in 1996 and 1997, was a winner of the UNH alumni golf tournament, as well as winning the club championship at the Quechee Lakes Club. One of the highlights of his golf career included beating Keegan Bradley. In the retelling of his victory, he did not always emphasize the fact Mr. Bradley was age 12 at the time. Gifted athletically, in high school, he won New Hampshire State Championships in both soccer and the high jump. When his son, JJ, was in high school, he officiated high jump competitions. Jim was a graduate of the University of New Hampshire, from which he received a degree in Chemical Engineering. Upon graduation, James joined the Army in the Army Corps of Engineers and was fortunate to serve his country in Europe. Upon leaving the Army, James worked for PPG, where he spent time traveling to Vermont, a place which he grew to love enough to move his young wife and daughter and leave the corporate world behind. His life in Vermont allowed him the freedom to pursue his love of golf, stream fishing, and to attend every one of his children’s sporting events. His later years were marked by increased health challenges. However, his grit and determination drove him to make modifications to his home, including the use of a construction lift in lieu of stairs, and to continue to drive to Florida, despite only having one leg. He was an inspiration to all of those fortunate to know him. Jim was a kind soul who kept his doors open to both friends and family. His dedication to his wife, Margaret, provided a true example of the power of love. A celebration of life will be held as COVID-19 restrictions allow. In the meantime, raise a glass, walk on some green grass, and share your favorite story of him, all to celebrate the life of Jim Winn!