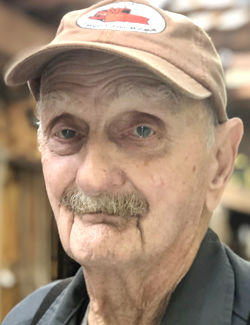 John C. Rawson CLAREMONT — John Clyde Rawson, 89, of Claremont (formerly of Cornish) passed away peacefully on Jan. 11, 2020, at Sullivan County Health Care, from cancer. John was born on March 1, 1930, in Windsor, Vermont, to Rubert Clyde Rawson and Grace (MacFadden) Rawson. He went to school in Cornish and Claremont from where he graduated and then was drafted into the Army (1952 to 1954). John was employed by various local farms and later the State of New Hampshire and Town of Cornish and Plainfield highway departments. He was also employed as a logger on and off for many years, where he was highly regarded for his skills for felling trees in difficult situations. In later years, John worked for the Town of Cornish Cemetery Department until he finally decided to retire at the age of 80. John loved deer hunting, wood cutting, gardening, tending to his chickens and reading westerns. He especially loved attending the Cornish Fair with his granddaughter Emily, which he drove her to until she got her license and she informed him that she would take over the driving. He was very fond of animals having several beloved dogs and cats, Blackie, Emma, Smidgie and his best buddy Smudgie. He was loved by everyone who knew him and was often called a gentleman. He was willing to help anyone who needed something. He will definitely be missed around the neighborhood by all. His stories and reminiscing will be missed by many. John was predeceased by his wife Ruth (Parkhurst) Rawson; both of his parents; his sister Patricia Rawson; and his first wife Barbara (Eastman) Rawson. He is survived by his son Alan Rawson and wife Sherry, with whom he spent his last 18 years living and enjoying life; his granddaughters, Melissa Rawson and Emily (Rawson) Loring and husband Kyle; great-grand-kids, Zackery, Shania, Colby, Mackenzie and Madison; and his great-great-grandsons, Parker and Sawyer. There will be no funeral services per his wishes. A graveside service will be held in Child Cemetery in Cornish in the spring. He will be laid to rest with his wife Ruth and his beloved dog Blackie. RIP, Grampa John. We love you and you will be missed. Arrangements are with Stringer Funeral Homes and Crematorium, 146 Broad St., Claremont, NH 03743. To view an online memorial or send a private message of condolence, visit www.stringerfh.com.