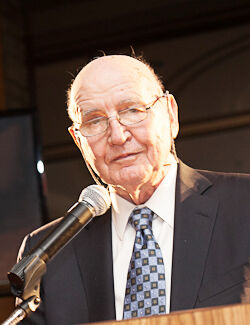 Marshall M. Gelfand CLAREMONT — Three generations said a loving goodbye to Marshall Morris Gelfand, formerly of Claremont, New Hampshire, who passed April 1, 2021, at 93 years old, an impactful life well-lived. Marshall is survived by his children, Todd Evan Gelfand (Doreen), Elizabeth Gelfand Stearns (Richard) and Dean Loring Gelfand (Marcie); along with eight grandchildren, Brian Gelfand (Monica), Ilana McBride (Marcus), Gregory Stearns (Gabriella), Jacqueline Stearns (Spencer), Ben Gelfand (Samy), Sophie Gelfand, Ella Stearns and Andrew Gelfand; along with four great-grandchildren, Ayla, Addy and Riley Gelfand and Lively McBride. Marshall M Gelfand was born on Dec. 14, 1927, in Claremont, New Hampshire. Marshall’s parents, Annie Senoff Gelfand and Isaac N. Gelfand, both immigrated from Russia in the early-1900s settling in Claremont, New Hampshire, where they lived for over 50 years. Annie and Isaac had three children, Edith Gelfand Takiff (b.1921), Natalie Gelfand Remis (b.1923) and Marshall Morris Gelfand (b.1927). Isaac spent his life as the local tailor in Claremont, working under the eponymous sign, I.N. GELFAND TAILOR FINE CLOTHES. This century-old sign lives today in the Gelfand family home in Orford, New Hampshire. Marshall graduated from Stevens High School in Claremont in 1945. He was the editor of the Stevens High School yearbook, played varsity basketball, was awarded the DAR History award and was a graduation speaker. Marshall graduated from Syracuse University in 1950, with a degree in accounting from the Whitman School of Management. He was welcomed into the 25-man pledge class of Sigma Alpha Mu fraternity. These two events began a lifetime of dedication, leadership and service to his beloved Syracuse University and to Sigma Alpha Mu. In 1983, Marshall was appointed to Syracuse University Board of Trustees, and remained a trustee emeritus. Marshall was instrumental in the establishment of Syracuse University Los Angeles. In 1996, Marshall received the George Arents Pioneer Medal and in 2007, the Melvin A. Eggers Senior Alumni Award, the highest honors that Syracuse University bestows. Marshall’s lifetime of leadership of the Sigma Alpha Mu Eta Chapter is memorialized by the dedication of the fraternity house in his name on the Syracuse campus. Marshall served his country in 1946 as an enlisted Naval Correspondent based in Washington, DC, and again during the Korean War in 1951, serving 20 months at Pearl Harbor, Hawaii. Marshall graduated from New York University School of Law in 1956 and became a member of the New York Bar Association in 1958. In 1959, he became a partner at Lawin & Futter, a New York accounting film. Marshall became the accountant and business manager for Peter Paul & Mary, Bob Dylan and Neil Diamond in 1966. These clients launched a direction that changed his career and the industry he helped build. In 1967, Marshall opened his own accounting firm which, over the next 55 years, grew into the largest international business management firm in the entertainment industry, Gelfand Rennert & Feldman, LLC. Today, Gelfand Rennert & Feldman represents clients in all facets of the entertainment and sports industries, along with high-net-worth families. While the firm’s success has reached great heights, it was the 500 employees and nine offices worldwide that Marshall remained most proud of. Marshall married Judy Jaffe in 1955 at the Pierre Hotel in New York City. They lived in Forest Hills and Great Neck, New York, followed by a move to Palm Springs, California, in 1973, where they raised their three children. Marshall and Judy were both philanthropic leaders in Palm Springs. Marshall served as president of the Palm Springs Art Museum, The Barbara Sinatra Children’s Center and Temple Isaiah. Their philanthropic work is permanently honored with their own star on the Palm Springs Walk of Stars. Marshall established The Judy Fund in 2004 in memory of his wife, Judy, who died of Alzheimer’s disease. The Judy Fund is the largest family fund in the history of the Alzheimer’s Association, and has raised over $9 million in support of Alzheimer’s research and care. In 2014, Marshall received the Sargent and Eunice Shriver Profiles in Dignity award for his work with The Judy Fund. After Judy’s passing, Marshall met and married Jacqueline Rudman, and they spent 12 wonderful years together in Rancho Mirage, California. If the measure of a person’s life can be determined by how they were loved and the positive impact that they made on the world around them, then there can be no doubt that Marshall M. Gelfand lived a rich, happy and successful life. Marshall will be buried alongside Judy in a private family ceremony at Wiefels & Son Mortuary in Palm Springs, California. On a future date, there will be a Celebration of a Life Well Lived. Pickles with Papa will continue, every Sunday, in his memory. Donations can be made in Marshall’s memory to The Judy Fund at the Alzheimer’s Association: online www.alz.org/judyfund; or by mail to The Judy Fund, Alzheimer’s Association, 225 North Michigan Ave., Chicago, IL 60601.