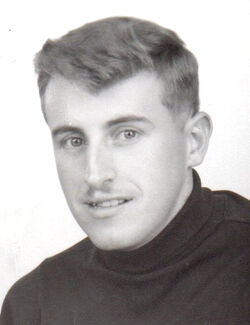 Michael Stephen Pevine CLAREMONT — Mr. Michael Stephen Pevine, 69, formerly of Claremont, died Oct. 15, 2020, at William Childs Hospice House in Palm Bay, Florida. He was born in Claremont, New Hampshire, and lived in Barefoot Bay, Florida, 14 years, coming from New Hampshire. Mike was a Marine Corps veteran serving during Vietnam in Okinawa. He was an owner and operator of Pevine Logging in the Gilford, New Hampshire, area. Mike also worked as a fabrication welder for many years. Mike was a member of the VFW, Orioles and Eagles. He was also a charter member of the Freelancer Motorcycle Club in New Hampshire. Mike loved riding his Harley and hunting. Survivors include his loving wife, Debra Ann Pevine of Barefoot Bay; son, Sean Pevine of Lancaster, New Hampshire; stepdaughter, Crystal Aiken (Michael) of Lempster, New Hampshire; stepson, Michael Welch (Erika) of Laconia, New Hampshire; four grandchildren; mother. Evelyn Marston of Barefoot Bay (preceded in death by his father, Rene Pevine); sisters, Sandra Rozen of Barefoot Bay and Maxine Wagner (James) of Barefoot Bay; and several nieces and nephews. Memorial contributions may be made to St. Jude Children's Research Hospital, 501 St. Jude Place, Memphis, TN 38105-9959. At the request of the family, services will be announced at a later date. Arrangements are by Strunk Funeral Home and Crematory, Sebastian, Florida. A guest book is available at www.strunkfuneralhome.com.