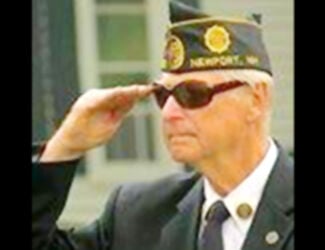 Peter R. Lovely, Sr. NEWPORT — Peter R. Lovely Sr., 77, passed away on Friday, Oct. 16, 2020, peacefully at his home with his family after his bout with cancer. Son of Marjorie Snow and Edgar Lovely, Peter was born on June 9, 1943. He grew up in Gloucester, Massachusetts, was a Boy Scout and earned his Eagle Scout at the age of 15. He graduated from Gloucester High School. He played center for the Fisherman football team, a family tradition, as his grandson, Gavin, played center for the Newport Tigers. He met Martha Elaine Meacham, the love of his life for 56 years, at the University of Massachusetts. He enlisted in the U.S. Army in 1963 and received training in Morse Code intercept at Fort Devens, Massachusetts. He served two years in Germany and was discharged in 1967 just after the birth of daughter Lisa. The family moved to Newport, New Hampshire, in 1968. His service to his country did not end after discharge. He joined the America Legion Post 25 in 1968, serving as commander and adjutant for several terms, as well as finance officer for the post and District 6. He was recently honored as a member of the 40 and 8, an honor bestowed upon him for his exemplary dedication to the American Legion and community service for 45+ years. He was proud to organize and facilitate Memorial Day and Veterans Day activities on the Newport Town Common, and attended nearly all local military funerals. He was instrumental in bringing the Vietnam Veterans Moving Wall to Newport’s Parlin Field. Equally important was his service to community. Peter was a 45-year member of the Newport Lions Club, serving as King Lion for many terms. He was a co-founder of the Newport Revitalization Committee. He was Sullivan County Treasurer for 30 years. He was a Jaycee, a Scout master, coach, a member of the Moose Lodge, Foresters, Chamber of Commerce and Vets Club. He was awarded the Distinguished Citizen of Newport in 1995. He spent time at Millie’s Place first learning from others, and then sharing his knowledge and support. In 1968, Peter started his career at First National Bank of Newport before moving on to Lake Sunapee Bank in 1980. He often greeted customers personally with a smile, quick joke, or long tale. After retirement from the bank, he served on their Board of Directors for several years. In his personal life, he enjoyed playing cards with his family, yearly fishing trips with his pals, and many golf outings supporting local charities. He especially enjoyed travel with his wife, children, grandchildren and friends. He is survived by his wife of 56 years, Marty; his daughter, Lisa and husband Ed; his son, PJ and wife Erin; six grandchildren, Riley, Jared, Gavin, Ryder, Jagger and Maddox; his sister, Jeanne and husband Harry, nephew and niece, David and Jodie Amero. There will be no services at this time. A celebration of life will take place in summer of 2021. The family wishes to thank Lake Sunapee Region VNA and Hospice for their care. Donations can be made to The Newport Lions Club, P.O. Box 184, Newport NH 03773. Rest easy, Dad, you left your mark, and it is everlasting.