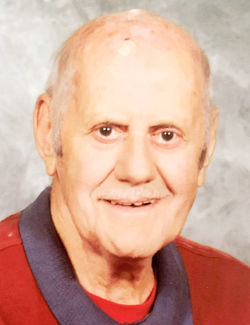 Raymond Janelle CLAREMONT — Raymond Janelle of Elm Street passed away June 24, 2020, at the age of 85. He was born in Manchester, New Hampshire, to Henry and Loretta Janelle on Feb. 12, 1935. Ray was a 1952 graduate of St. Mary’s High School in Claremont. He entered the U.S. Air Force in 1935 and was honorably discharged in 1957. He then went to work for Claremont Coca Cola until he retired in 1990. He also worked for the Claremont School District until 2017. Survivors include his wife, Beverly; daughter, Robin Butterfield and son-in-law, Dale Butterfield of Claremont. He is also survived by his grandchildren, Corey Butterfield and wife, Meredith, and Nicole Talley and her husband, Shane; three great granddaughters, Haleigh Butterfield, Katelynn Butterfield, and Cierra Butterfield; one great grandson, Cohen Butterfield; and great great granddaughter, Amelia. He was predeceased by his father and mother Henry and Loretta Janelle; son, Keith Janelle; his brother, Robert and wife Norma Janelle. A Mass of Christian Burial will be held at St. Joseph’s Church on Tuesday, June 30, at 10 a.m. in Claremont. Committal service will follow in St. Mary’s Cemetery. As Ray requested, there will be no visiting hours. Arrangements are with Stringer Funeral Homes and Crematorium, 146 Broad St., Claremont, NH 03743. To view an online memorial or send a private message of condolence, visit www.stringerfh.com