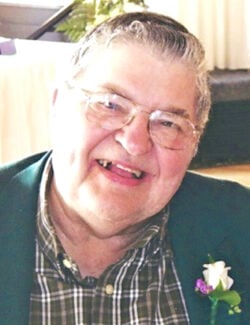 Raymond P. Narushof BERWICK, Maine — Raymond Peter Narushof, 81, formerly of Berwick, passed away peacefully on April 5, 2021. Ray was born Aug. 12, 1939, in Claremont, New Hampshire, to Raymond and Helen (Czemerys) Narushof. Ray is survived by his wife, Rebecca (Mark); as well as his children and their spouses, Peter and Jill Narushof, Ruth and Rick Odess, Grace and Joe LaPlante and Mary and Mike Blanchette. He is also survived by his sister, Polly Chase. He was predeceased by his parents; his brothers, Ed and Jan; and sister, Mary Carol Plammondon. Ray has nine grandchildren, 12 great-grandchildren and one great-great-grandchild, as well as several nieces and nephews, who brought great joy to his life. Ray graduated from Stevens High School in Claremont in 1957. He was a member of the Cardinals football team and loved his time playing football. He played JV football for two years and his junior and senior years played varsity. Recently, he was able to attend a Cardinals vs Somersworth game and was thrilled to meet Coach Silva and each team member after the game. He was a member of the Army National Reserve for several years and had a long career as a tool and die maker. Ray retired from General Electric in Somersworth after 20 years. He loved all things relating to the ocean and was an avid scuba diver for many years. A true outdoorsman, he loved fishing, hunting, and was an FFL dealer, as well as a gunsmith, in his retirement years. Ray was a member of the New England Lamplighters gospel quartet and sang tenor on their debut album in 1967. The group held concerts in New England, bringing rich harmony to beloved hymns and gospel songs. Everyone who met him was easily drawn to his smile and laughter. His sense of humor and hardy laugh will be greatly missed. Ray’s family is incredibly grateful to all the caregivers and health care providers who, along with his family, provided support and care over the last few years A private ceremony will be held at a later date. In lieu of flowers, donations in Ray’s honor may be made to: The Stevens High School Football Program, c/o Paul Silva, 175 Broad St., Claremont, NH 03743; or Oceana.org, an organization protecting the ocean and marine life, a cause close to his heart. Arrangements are entrusted to the Johnson Funeral Home in North Berwick, Maine, where condolences may be expressed at www.JohnsonFuneralHomeME.com.