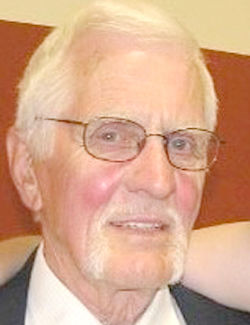 Raymond Robert Davis UNITY — Raymond Robert Davis of Claremont, New Hampshire, passed away peacefully with his family by his side on March 25, 2020, at age 92. Ray was born on his parents' farm in Candia, on April 4, 1927, to Walter and Mary (Tomasi) Davis. He grew up on the family farm in Candia, where he especially enjoyed summers when his cousins would come to stay and work. He graduated from Manchester Central High School in 1944, enlisted in the U.S. Army and served in France and Germany during World War II. When he returned he attended St. Anselm College in Manchester, New Hampshire, earning a degree in biology. Ray worked in sales for many years and began a second career when he started a landscaping business. He loved working outdoors and often said that hard work was the best medical insurance. He spent many happy hours skiing, snowmobiling and camping with his family. He loved to recall fond memories of traveling and hunting in the western United States with his family, and especially liked to tell stories about the hunting trips he took in Colorado. Ray loved music and enjoyed singing and playing a number of instruments. He also had a large collection of number plates that he liked to show off. Ray is survived by his wife Ruth Davis, his former wife Nancy (Pearson) Davis, his children Kathleen Mancini and husband Tom, Keith Davis and wife Joy, Karen Johnson and husband Eric, Kristen Hagler and husband Dan and Peter Davis and wife Kim, and stepdaughters Victoria Meyer and husband Erich and Valerie Adams and husband Frank. Ray was preceded in death by his parents, a brother, Elton J. Davis, a son, Paul and a daughter, Alice. Baba will be lovingly remembered by his 16 grandchildren and six great-grandchildren. He also leaves behind many cousins, nieces and nephews. A private memorial service will be held at the convenience of the family. In lieu of flowers, please consider a donation in memory of Ray to Mt. Ascutney Outdoors (P.O. Box 101, Brownsville, VT 05037) or to Saint Anselm College (College Advancement, Saint Anselm College, 100 Saint Anselm Drive, Manchester, NH 03102). You are invited to share a memory of Ray with the family or leave a message of condolence in the family guest book at www.royfuneralhome.com