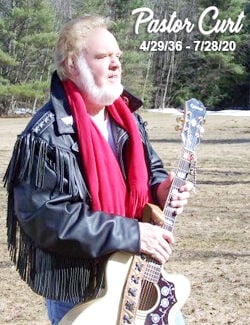 Rev. William “Curt” Jensen NEWPORT — Rev. William “Curt” Jensen departed to his home in glory on Tuesday, July 28, 2020, to be reunited with his beloved wife Gail, who went on ahead just three years prior. Curt was 84, and accomplished much in his many years. Born the second of twins in Brooklyn, New York, to Danish immigrants who were told they could not have children, his very entrance into this world began as a miracle. At 19, Curt joined the U.S. Army and advanced to sergeant first class in the signal corps, which made for a seamless progression to a prosperous 44-year career with the New York Telephone Company in Manhattan. Curt grew up on Long Island in Freeport. Following in his family’s musical footsteps, he began playing guitar at age 4, and was featured on a local radio station after winning a talent contest at age 8. By the time he was 23, Curt was under contract with a talent agent, cutting a Top 100 record and performing on “American Bandstand.” Music was his life but it took second place to his love for God. After meeting his soulmate, Gail, (in church no less), he left behind the lights and glamour of worldly pursuits to answer a higher calling. Curt and Gail spent their 50-plus years in ministry using this gift of music. In September 1988 they became officially ordained pastors and followed the Lord’s leading to begin a church in Newport, New Hampshire. Many remember Curt as a favorite school bus driver; Newport’s beloved Santa of the town’s “Twas” events; the charismatic entertainer at so many nursing homes, senior centers and jamborees; and, of course, the steadfast shepherd, counselor, encourager and faith-filled leader of My Father’s House Ministries/ Faith River Church in Newport. He has finished a well-run race, and though we know he is finally HOME, our hearts yearn all the more for the day our savior reunites all of His children. We say, “so long” and not “goodbye,” as God smiles and says, “Well done, thy good and faithful servant!” Curt truly set the example of seeking and obeying God in all things, and he leaves a legacy of love, support, wisdom, character, and faith to his children, Bambi (DeFilippis), Heidi (North), and Daniel; their spouses, Mark, Jeff and Megan; his grandchildren, Heather, Brianna and Lindsay DeFilippis, Ryan and Sara Manning, Curtis and Caleb North, Autumn and Dylan Jensen, and great grandchildren; Harper and Nora Manning. A Celebration of Life memorial service will be held at Faith River Church, Main St., Newport (next to the high school) on Saturday, Aug. 29 at noon. BBQ fellowship luncheon immediately following. In lieu of flowers, consider a donation to Curt’s living legacy, the ongoing ministries of My Father’s House Ministries/ Faith River Church at P.O. Box 447 Newport, NH 03773.