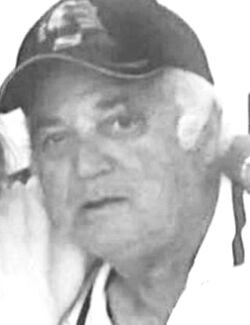 Robert A. Wentzell NEWPORT — After a short battle with esophageal cancer, Robert A. Wentzell passed away peacefully at the age of 81 on July 31, 2020, at Woodlawn Care Center with his daughter, Paula, at his bedside. Robert (Bob, Beep, Bumpa) was born in Claremont, New Hampshire, on Nov. 30, 1938, the son of the late Aubrey and Ann (Cadorette) Wentzell. He was predeceased by his sister, Beverly Gentes and husband Lucien; and his brother, Gerald Wentzell. He is survived by his beloved children, Michael Wentzell and wife Julie of Newport, New Hampshire, and his daughter, Paula Martell of Newport, New Hampshire; his three grandchildren, Cassandra Wentzell of Sunapee, New Hampshire, Taryn Wentzell of Enfield, New Hampshire, and Mason Martell of Newport, New Hampshire; his adoring sister, Shirley Husband and her husband, Roland, of Windsor, Vermont; his brothers, Raymond Wentzell and wife Grace of Goshen, New Hampshire, and Richard Wentzell and partner Lisa Brown of Newport, New Hampshire; and his sister, Audrey Zullo and husband Alex of Newport, New Hampshire; and several nieces and nephews; and best friend, Ed Karr. As a young man, he served in the Army National Guard for several years. He was called into active duty at Fort Bragg Military Base in North Carolina during the Cuban Missile Crisis. Bob worked for many years at Goodyear Tire in Windsor, Vermont, where he was a supervisor. Bob sold new and used cars all of his adult life and ran his own business, “Reliable Auto Sales,” for decades. Although he was a car salesman, he was loved by many and had numerous long-term customers (friends) for decades, as well. He absolutely loved to host and entertain his family and friends, whom he had many of. He hosted card night (pitch), pool night (on his beautiful oak pool table), horseshoes or just sitting on his beloved porch on South Main Street chatting and, of course, all these events included some cocktails (favorites were the “Beep Special” and the “Eddie Karr Special”). From spring to fall, you would find Bob "Beep" sitting on his front porch late into the evening with many cars driving by beeping their horns or yelling and waving to him. Most of the time, he had company on the porch with him holding court throughout the day and evening. Jokingly, Bob was referred to as the “Mayor of Newport.” In the winter, you would find him sitting in his old plow truck, which he loved, at the top of his driveway, reading the paper because there was “better light,” or eating his lunch. Bob loved sports and was a great athlete at Towle High School in Newport, New Hampshire. In the 1970s, he played on the town softball league for several years. He always told his grandson, Mason, that he got his athletic abilities from him. He attended all of Mason’s track & field events and soccer games that he was able to. Bob was an avid NY Yankees, NY Giants and Boston Bruins fan. He made several trips to the Boston Garden to watch Bruins games with his friends and children. Bob’s love for his children and grandchildren was abundant. He often told them and others how proud he was of them. He was always there for them with love and support. He went to every possible band gig to support his son, Michael (Mike, Weez) and would be on the dance floor all night, as he loved to dance. He cared deeply for his friends and would do whatever he could to help them. He was a giver, he cared more about others than himself and was extremely generous. He was definitely a lover, not a fighter! Bob was a kind and gentle soul! There will be a burial service in the North Newport Cemetery in North Newport, New Hampshire, on Saturday, Aug. 8, 2020, at 11 a.m. (Directions: From Route 10 take Oak Street 2.25 miles. Entrance is on the right. Alternate: North of Newport Airport on Route 10, turn left onto Corbin Road. Follow Corbin Road 1.48 miles to Oak Street. Turn left onto Oak Street and go 0.1 mile. Entrance is on the left.) A Celebration of Life will be held directly following at the VFW Post 25 in Newport, New Hampshire, 118 John Stark Hwy. Please bring a dish to share. Light refreshments will be served. Paula (daughter) would like to extend her heartfelt appreciation to her Dad’s extended family at Woodlawn Care Center. Their compassion in caring for her Dad the past two years, and especially the last three weeks of his life, was exceptional. The support coming from Chris Martin, Lori Weed, Brandy Durgin, Tammy, Charlene, Sue, all the LNAs and the entire Woodlawn family extended to Paula and her Dad during his final weeks was extraordinary. In lieu of flowers, the family asks that you make donations in memory of Robert Wentzell to the Newport Recreation Department, 65 Belknap Ave., Newport, NH 03773, phone number (603) 863-1332.