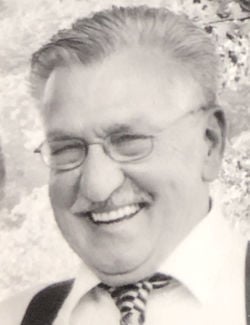 William Harriman PERKINSVILLE, Vt. — We are saddened to announce the passing of Bill Harriman on May 17, 2020. He died in his home after a long battle with COPD. He was born on Feb. 26, 1941, to Victor and Alice Harriman, in White Plains, New York. Bill grew up in Andover, Connecticut, and attended RHAM High School. He joined the United States Army soon after graduating and became a Green Beret with a black belt in kenpo karate. Most of his military time was stationed in Okinawa, Japan. Bill spent most of his working life as a meat cutter, in various stores, but also welded for a number of years at Bryant Grinder in Springfield, Vermont. Bill was an avid hunter and fisherman and absolutely loved to spend as much time as possible with his family. They and his dog, “Baxter,” meant the world to him. He also enjoyed reading and spending time sitting with his wife by their pond, with a good glass of wine, watching the goldfish chase each other around. Bill is survived by his wife of 56 years, Audrey Harriman; his brother, Victor “Buddy” Harriman, sister, Patricia Skoog; his four sons, Clifford, Charles, Jeffrey and Scott; his four daughters-in-law, Stephanie, Stacey, Sarah and Kelly; his nine grandchildren, Vanessa and Jacob, Cory and Gavin, Cameron and Reece, and Raphael, Isabella and Birhanu. Bill’s wish was to have a small celebration of his life with his family at a later date. Davis Memorial Chapel in Springfield is assisting with arrangements.