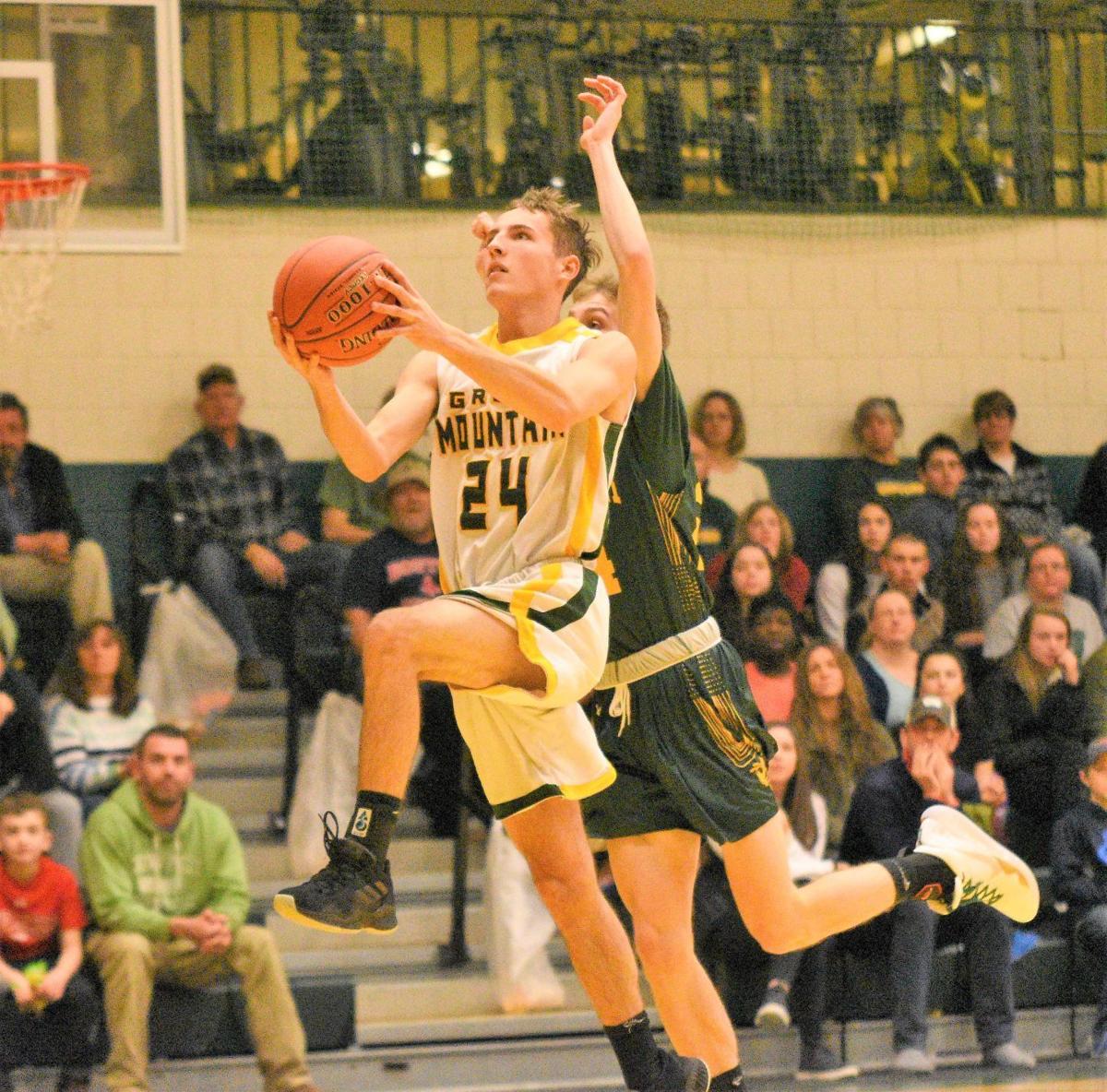 Green Mountain’s Ty Merrill (24) goes up for a shot during a game last season. 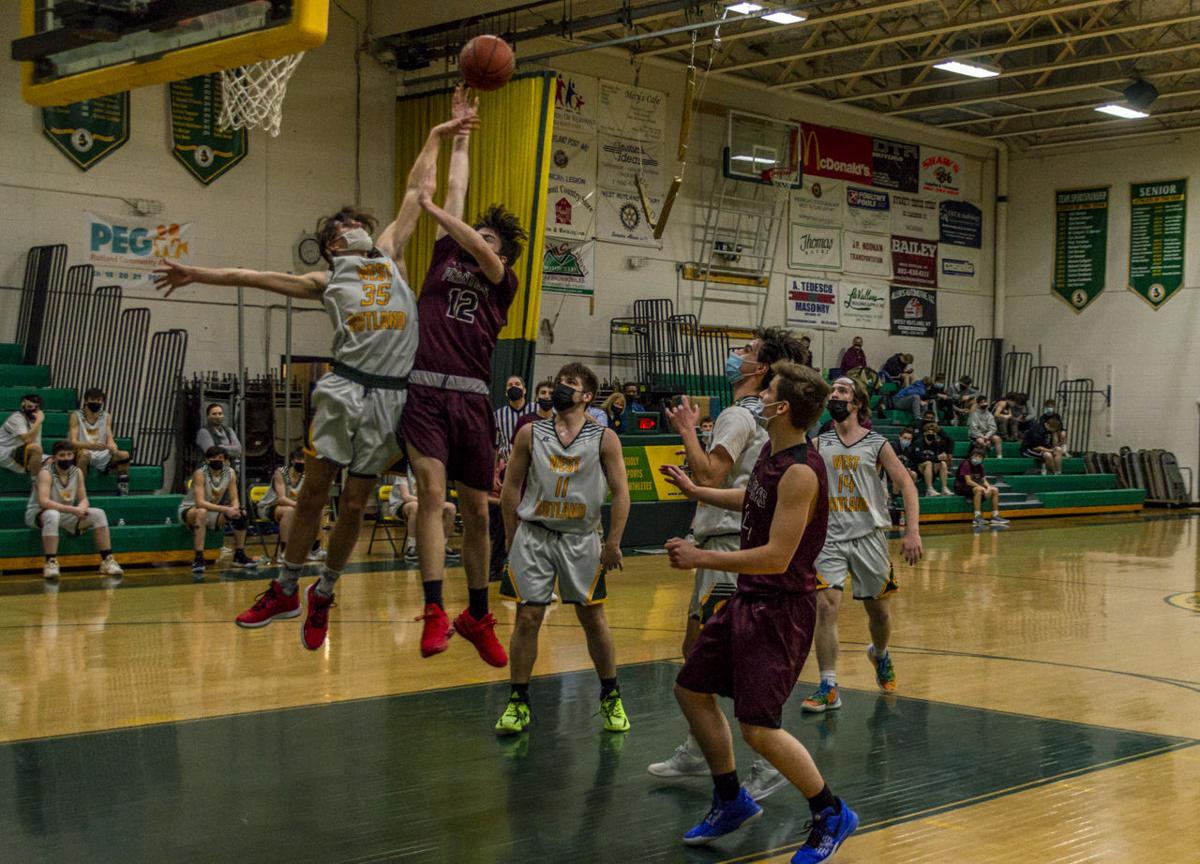 Proctor’s Bryson Bourne (12) shoots the ball as opponent Tim Blanchard (35) guards him in front of the basket in West Rutland.

Green Mountain’s Ty Merrill (24) goes up for a shot during a game last season.

Proctor’s Bryson Bourne (12) shoots the ball as opponent Tim Blanchard (35) guards him in front of the basket in West Rutland.

Nothing compares to the feeling of taking the steps up the ladder to cut off the piece of the net after a state championship win.

It’s the elation of victory, the sense of relief and the feeling of accomplishment. All of those feelings are wrapped into a ball and it shows on each player’s face as they takes their turn getting their little slice of history.

This year’s boys state championship day will be a bit different, there’s not much to dispute that. There won’t be any fans in the venerable Barre Auditorium. The energy usually built from the crowd will have to be manufactured on the court and by the players on the sidelines.

But when the ball is thrown up on Sunday, it will be familiar. It’s still the game these kids have played all their lives and it’s a chance to finish as a champion.

What teams will etch their names in history?

Often state championship games involve two teams that don’t play often and are unfamiliar with each other.

In this year’s Division IV title game that couldn’t be farther from the truth, with arch rivals No. 5 Proctor and No. 7 West Rutland battling for the championship glory.

For the Phantoms, Barre Auditorium has become a second home. Proctor has won four of the last six D-IV titles and is the defending state champion.

The Phantoms are led by senior guards Conner McKearin and Brennon Crossmon. Both guys can get to the hoop just as well as they can knock down the 3-ball. Their defensive intensity matches their offensive profile.

“Conner brings a lot of energy and passion on the court. He’s their leader,” said West Rutland coach Jordan Tolar. “It will take a total team effort to slow those two guys and the rest of their team.”

Outside of McKearin and Crossmon, there is plenty of depth for the Phantoms. Brennon’s younger brother Carter has developed into a contributor as a freshman and guys like Jed Nop, Bryson Bourne and Cam Richardson are more than capable of taking over the game in stretches as well.

“They work well together. They won’t make anything easy on us,” Tolar said.

West Rutland makes its first trip to Barre since 2013, where the Golden Horde fell to Rochester in the D-IV final. When Tolar took over a few years ago, getting to this spot was the goal.

“It’s something we set out for. This was the first group we worked with when I came in,” Tolar said. “To be 32 minutes away from a possible state championship is exciting.”

West Rutland is an experienced bunch with nine of their 12 players being seniors. One of those seniors, Tyler Serrani, is a key cog in making the club go. Fellow senior Tim Blanchard and junior Levi Petit serve as great lead-guard partners.

The No. 6 seed Blue Devils have been to the D-III title game nine of the last 10 years and have won five titles since 2012.

The Chieftains have pedigree in a different way, having won a state title in soccer in 2019 and returning to that game in 2020. In 2018, Green Mountain was the state runner-up in baseball. One of their players, Jack Boyle, was on the Black River baseball state championship team.

This is the Chieftains first time time in a basketball state championship game, having only made it out of the first round once since 2006 before this season, but Green Mountain is ready for the big stage.

The Chieftains are a balanced club and upperclassman-laden. Ty Merrill is a strong guard scorer. Skyler Klezos and Sawyer Pippin are difference-makers at forward and Boyle is a constant double-double threat at center. Junior Everett Mosher is a great complement to Merrill at guard.

“They’re all playing unselfish and getting good looks,” said Green Mountain coach Brian Rapanotti. “In order to be a good team, the players have to hold each other accountable and this team does that.”

A player that has come on strong for Green Mountain is Branden Rose, who went from a junior varsity player to the Chieftains’ sixth man in a flash.

Williamstown had a bumpy start to this year, at 1-2, following a 0-6 start last season, but the Blue Devils finished strong and have been hot in the playoffs.

Their top player from last year, Cole Banks, transferred to St. Johnsbury, so they needed someone to step into the lead role. Junior Thomas Parrot has done just that.

Parrot is a physical guard with great court vision. Slowing him down is essential for Green Mountain.

“Parrot is their heart and soul. He runs the show for them,” Rapanotti said. “They all can shoot and handle the ball.”

Riley Cheney, Tavien Rouleau and Blake Clark are all great complements to Parrot.

Junior Greer Peloquin came up huge for the Chieftains when they need him most, hitting a game-winning 3 against BFA-Fairfax in the state quarterfinals last week.

This season is about finishing the job for the No. 2 Montpelier. Last winter, they were a free throw away from potentially winning a state title.

This year, they get another crack at it with a different opponent. The undefeated Solons face fellow unbeaten No. 1 North Country in Sunday’s D-II final.

The Falcons are making their first trip to the state championship game in program history, following a gut-check win on Thursday against defending state champion Fair Haven in the state semifinals.

North Country has a bunch of guys who can take over a game at any time. Austin Giroux did the honors against the Slaters, but Corbin Brueck, Cayde Micknack and Cooper Brueck can step in and do the same.

The Falcons will need to be at their best on Sunday because Montpelier has been a freight train that nobody has wanted to get in front of this season.

You can start with their two 6-foot-5 players Leo Riby-Williams and Rashid Nikiema, who pose matchup nightmares for opponents. Both guys are averaging double digit points. Riby-Williams is just 12 points away from 1,000 points for his career despite the semifinal against Mount St. Joseph being canceled.

Guard Tyler Ricker is second on the team in scoring, behind Nikiema. Ricker and Will Bruzzese are both hard-working defenders as well. Nathan LaRosa adds another capable scoring threat for the Solons.

Division INo. 1 Rice vs No. 3 So. Burlington

Undefeated No. 1 seed Rice is looking to make it back-to-back state championships in Division I, but No. 3 South Burlington serves as a tough test.

The Green Knights handily beat every opponent in their path to the championship game this year, except one – the Wolves.

South Burlington had Rice on the ropes during in the second game of the abbreviated 2021 season. The Wolves were up at the half and it took a big second half comeback for the Green Knights to pull it out.

South Burlington is coming off a tightly-contested semifinal against Rutland, where multiple guys stepped up at different times. Jonah Cattaneo, Khalon Taylor, Tavian Barrino and Tyler Gammon are among the many cogs that make the Wolves go.

Rice is similarly filled with depth, but its top player Michel Ndayishimiye has long been one of the best in the state and keeping him somewhat in check will be essential for South Burlington.