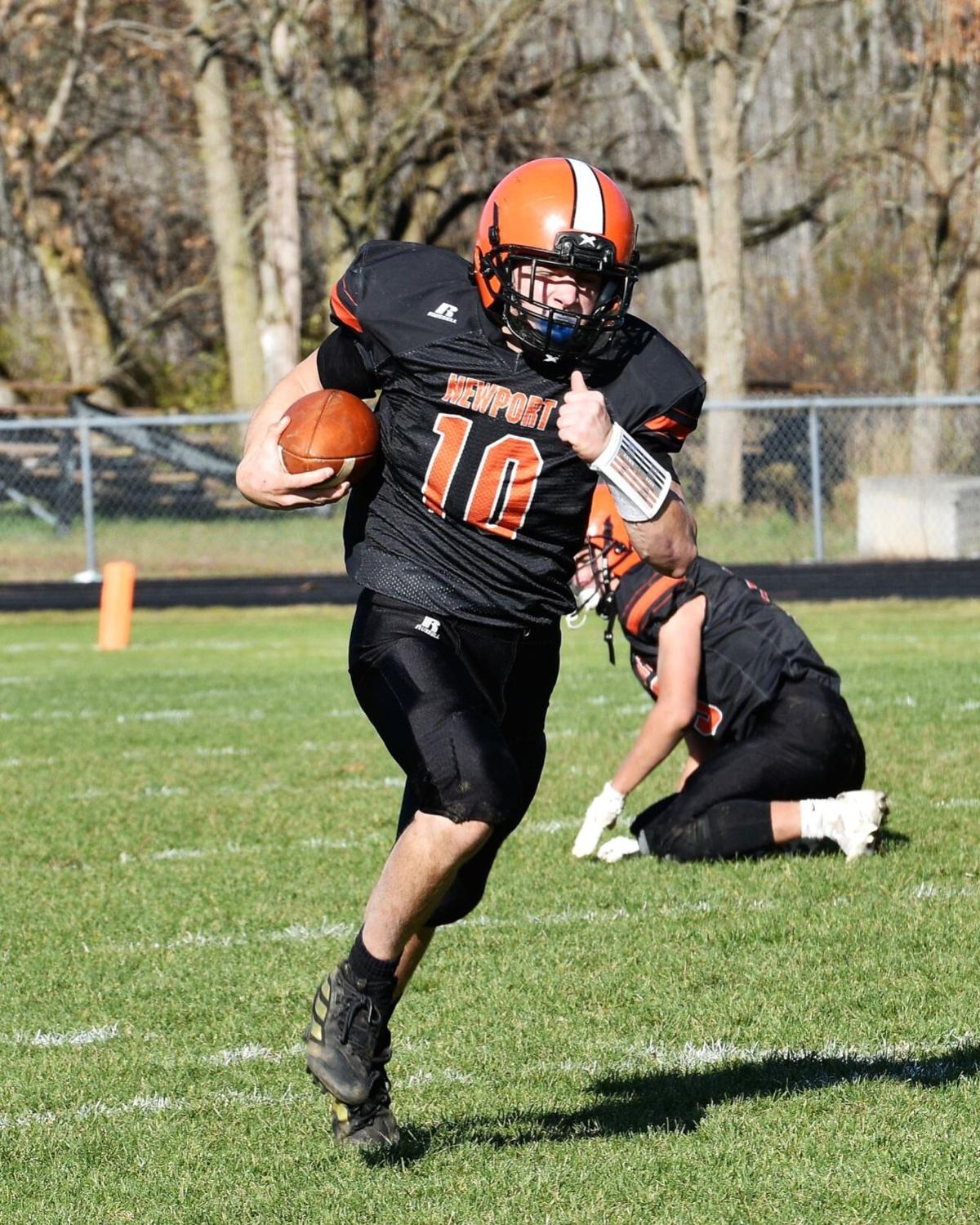 Newport Tigers quarterback Marius Edwards makes a run for it. The No. 1 seeded Tigers have been bulldozing over opponents all year and will seek to clinch a championship this weekend. 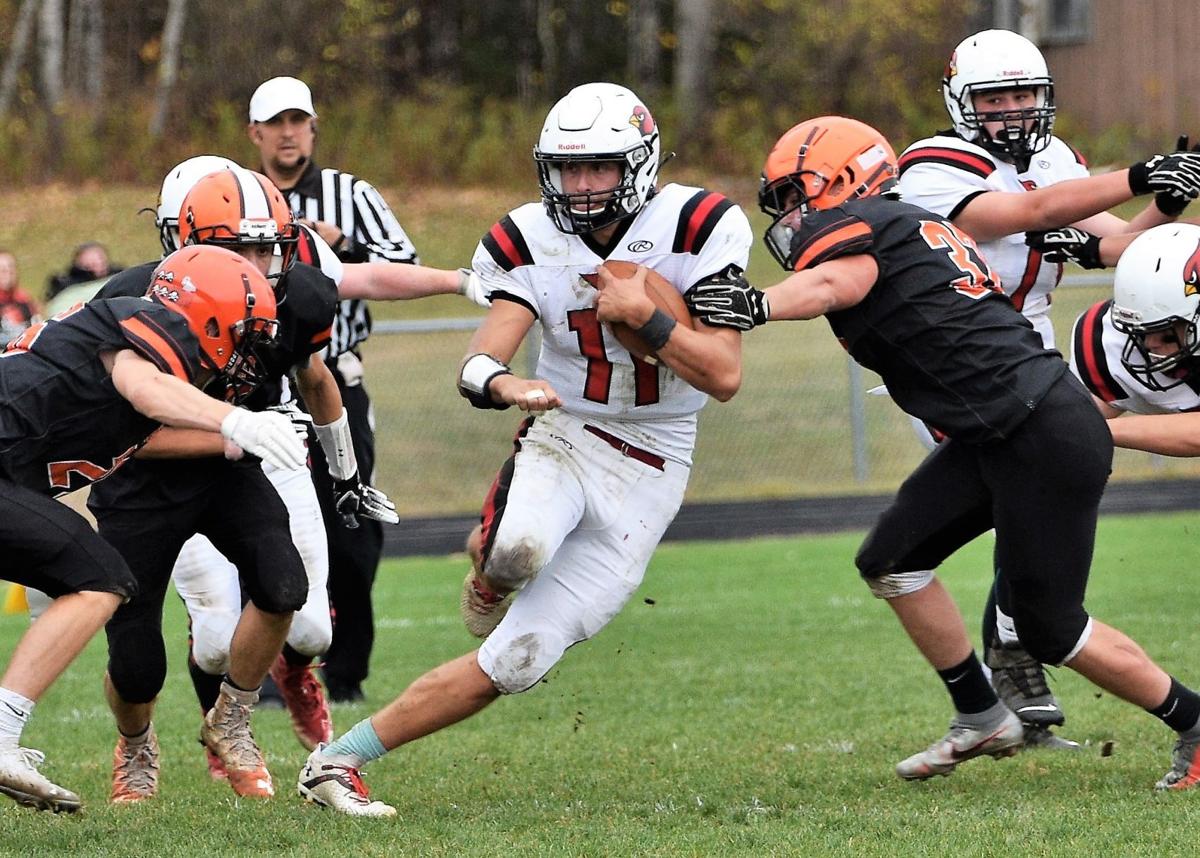 Stevens Cardinals quarterback Owen Taylor weaves between opponents. The No. 2 seeded Cardinals will take the bus ride to face No. 1 seeded Pelham for a Saturday 1 p.m. contest.

Newport Tigers quarterback Marius Edwards makes a run for it. The No. 1 seeded Tigers have been bulldozing over opponents all year and will seek to clinch a championship this weekend.

Stevens Cardinals quarterback Owen Taylor weaves between opponents. The No. 2 seeded Cardinals will take the bus ride to face No. 1 seeded Pelham for a Saturday 1 p.m. contest.

CLAREMONT — The final weekend of an incredible and unforgettable local sports season will have both the Stevens Cardinals and Newport Tigers battling for state championships in football.

In Division III, the No. 2 seeded Cardinals will take the bus ride to face No. 1 seeded Pelham for a Saturday 1 p.m. contest.

The Cardinals have played in the West region of the state and had some big time opponents on their schedule. Opening up against Division II power houses Lebanon and Hanover was ugly but a win over Division IV Fall Mountain at home was huge for Paul Silva’s team. Although a loss to Division IV opponent wasn’t a shock as the Tigers are as good as any Division III team and would be a handful for many Division II teams also.

After a heart-stopping win over Laconia and a forfeit by Winnisquam last weekend at the last moment has landed the resilient Cardinals a spot in Saturday’s championship game. An over-confident Pelham team made the mistake of thinking this Cardinals team is soft.

Silva’s teams always something up their sleeves and offensive coordinator Josh Duford knows the game as well as anyone. Owen Taylor could have a field day with JJ Tursky and Clayton Wadsworth in the air and give Pelham fits which may allow Pascal Lemieux a bit of room to run.

Turnovers on an expected blustery day will favor Stevens and Taylor’s biggest game of the year came on a cold wet night in Claremont. If the Cardinals can contain the running game of Pelham, this could be an upset win for the Cardinals.

No. 1 Newport at No. 2 Somersworth

In Division IV, the No. 1 seeded Tigers have been bulldozing over opponents all year.

Newport has outscored their opponents 199-37 during the regular season with their only loss coming at the hands of Division II Lebanon (7-6) way back in early October. Nobody can understand the reasoning why the New Hampshire Interscholastic Athletic Association (NHIAA) will send Newport across the state to Somersworth but Newport head coach John Proper isn’t going to let that make a difference.

“Of course we all wish we were playing in Newport but that’s out of our control,” Proper said. “We’re going to play where we’re told and do the best we can, period” said Proper in a recent interview. “Somersworth has some big bodies and are big up front with a very athletic tight end who is for real so it should be a great game.”

Newport is a run oriented team and only threw the ball three times in their win over Fall Mountain on Saturday while the Tiger ground attack rushed for over 300 yards on the backs of Jagger Lovely, Josh Sharron and Marius Edwards. The Tigers finished with an overall 4-1 (2-0 in Division IV) record while Somersworth played a single regular season game and defeated Raymond 29-12.

“It’s very unfortunate that the NHIAA didn’t look at the circumstances and they certainly could have made a better decision,” said longtime Newport athletics booster Brian Coronis on Wednesday. “But the town is buzzing about the Tigers success this season and everyone who comes into the store is hoping for a Newport win.”

Newport didn’t need any more ammunition to get ready for this game but the decision to have them travel for this game will be bad news for Somersworth. The line play of Newport should be the difference so make sure the firetrucks are fueled up to bring the team back into town.