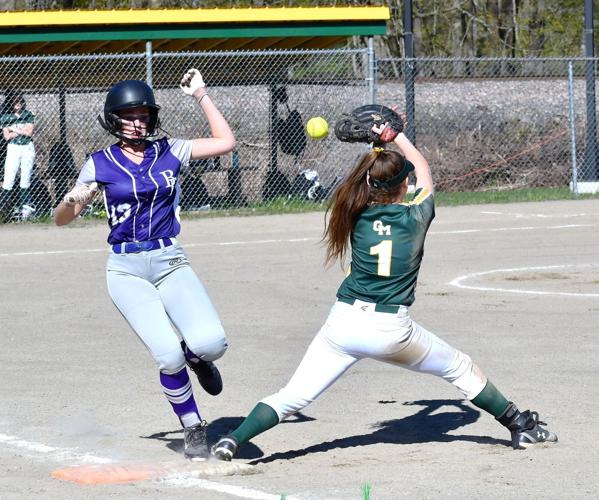 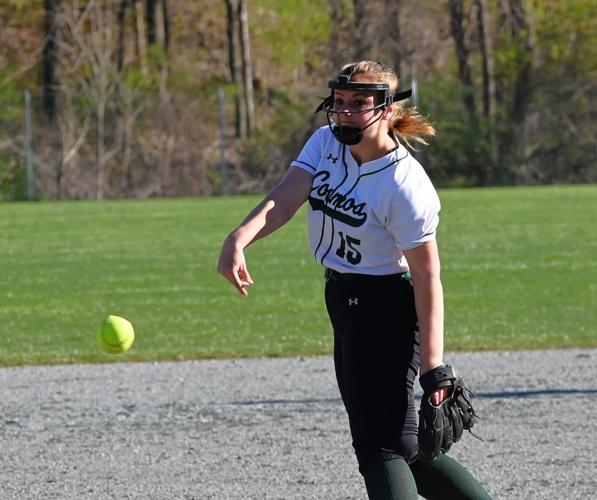 A Springfield Cosmos pitcher fires to the plate during Monday’s 25-3 victory over the Windsor Yellow Jackets. 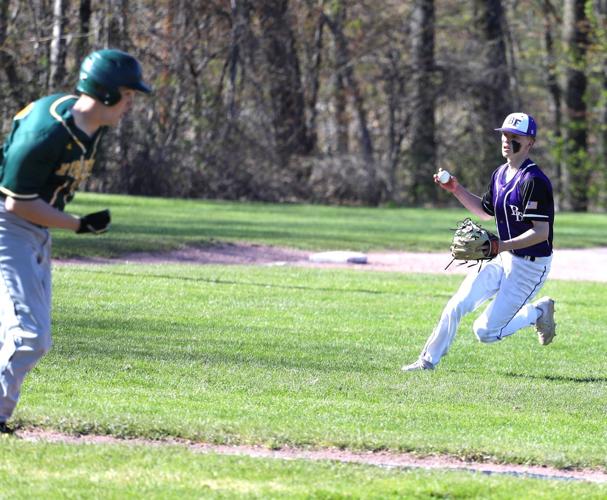 A Springfield Cosmos pitcher fires to the plate during Monday’s 25-3 victory over the Windsor Yellow Jackets.

A slugfest erupted on Tuesday with BF winning 24-12 with a combined 38 hits from both teams.

The Terriers scored in every inning as GM took an 8-7 lead after two innings before the BF bats exploded for nine more runs over the next two innings.

Four hits from Hailee Henslee paved the way to victory for Bellows Falls softballers over Green Mountain 24-12 on Tuesday. Henslee doubled in the second, singled in the third, singled in the fourth, and homered in the fifth while collecting 6 rbi’s.

The Terriers collected 24 hits while Chieftains had 14 in the high-scoring affair.

Emma Thompson was a perfect 4 for 4 for BF while Riley Haskell ended the day going 4 for 5. Grace Wilkerson knocked in four runs for BF.

Williams led Green Mountain with three hits in four at bats and six RBI’s. While C. Ayer finished with a couple of hits and three RBI’s of her own.

Springfield plated 11 runners in the first two innings and cruised to a win over Windsor on Monday, 25-3. With Yellow Jacket freshman Piper Vivian getting her first start on the bump, timely Cosmos hitting mixed in with a few miscues gave the visitors all the runs they would need early. Across the diamond, Izzy Belisle was in total control from the get go with a zippy fastball that kept the Jack bats quiet.

Ari Cioffi’s solid double in the first inning got the Cosmos off and running for Springfield. Add to that three walks and three hit batters ended up giving the visitors a quick 5-0 lead. “We know how good Windsor is, we beat them by a single run at home earlier this season and today we were very focused,” said Springfield head coach Tim Considine.

With Windsor battling injuries at many key positions, first year head coach Kelsey Mason was dipping into her bag of tricks often. “We will stay upbeat and will get healthier but today Springfield was on their game,” said Mason. “We have a great attitude and effort but the injuries are really hurting us.” During the game another injury claimed catcher Brianna Barton and forced Karen Kapuscinski into the game. “I’ve never caught before but I will do whatever it takes,” said Kapuscinski who played very well behind the dish for three innings.

Springfield would push nine Cosmos across the plate in the third inning without a hit before Windsor would scratch a run in their half of the inning. “We dropped a heart breaker to Bellows Falls on Friday and we responded really well today, we were patient at the plate and our defense was solid,” said Considine. Belisle, Jill Muther and Cioffi all racked up doubles while Belisle and Cioffi touched home plate four times.

Belisle gave way to Muther for the final 2 innings and was happy with the way her team came together today. “We made the hits when we needed to and smart base running combined with good defense was the difference for us today,” said Belisle who added, ” I spotted the ball really well today, I know Windsor can hit and I couldn’t make any mistakes against them.”

Springfield improves to 5-6 and will square off against Rutland while Windsor falls to 2-6 and will travel to Fair Haven, both games are scheduled for Thursday.

Kendal Cote struck out 13, walked three and gave up four hits in a complete game effort.

Melodee Chambers had the only hit for FM. Skylerar Blanchard scored a run and drove in a run.

The Terriers bats came alive for 11 unanswered runs and coasted to an 11-2 win on Monday.

Windsor got things started in the first inning when Johnny Clark’s sac fly scored one run for the Jacks then Maison Fortin scampered home on a past ball.

Bellows Falls would answer with a single run in their half of the first then pulled away for good with three runs in the third inning.

Bellows Falls scored four runs in the fourth inning. The offensive firepower by Bellows Falls was led by James, Jameson Nystrom, and E Allbee, all sending runners across the plate with RBIs in the inning.

Maison Fortin and Adam Dufour all had one hit to lead Yellow Jackets.

Stevens softball rolls on the road, 16-1

The Cardinals improved to 6-3 with a win at Souhegan on Monday, 16-1. Mia Herbert pitched a strong six innings with 13k’s and zero walks. The Cardinals got three doubles from Kiley Bundy (two RBI’s), Bri Frisbee with a Double and a Single (one RBI), Zoie Stevens a pair of doubles, a single and (three RBI’s) and Brianna Marsh with two hits and (three RBI’s).