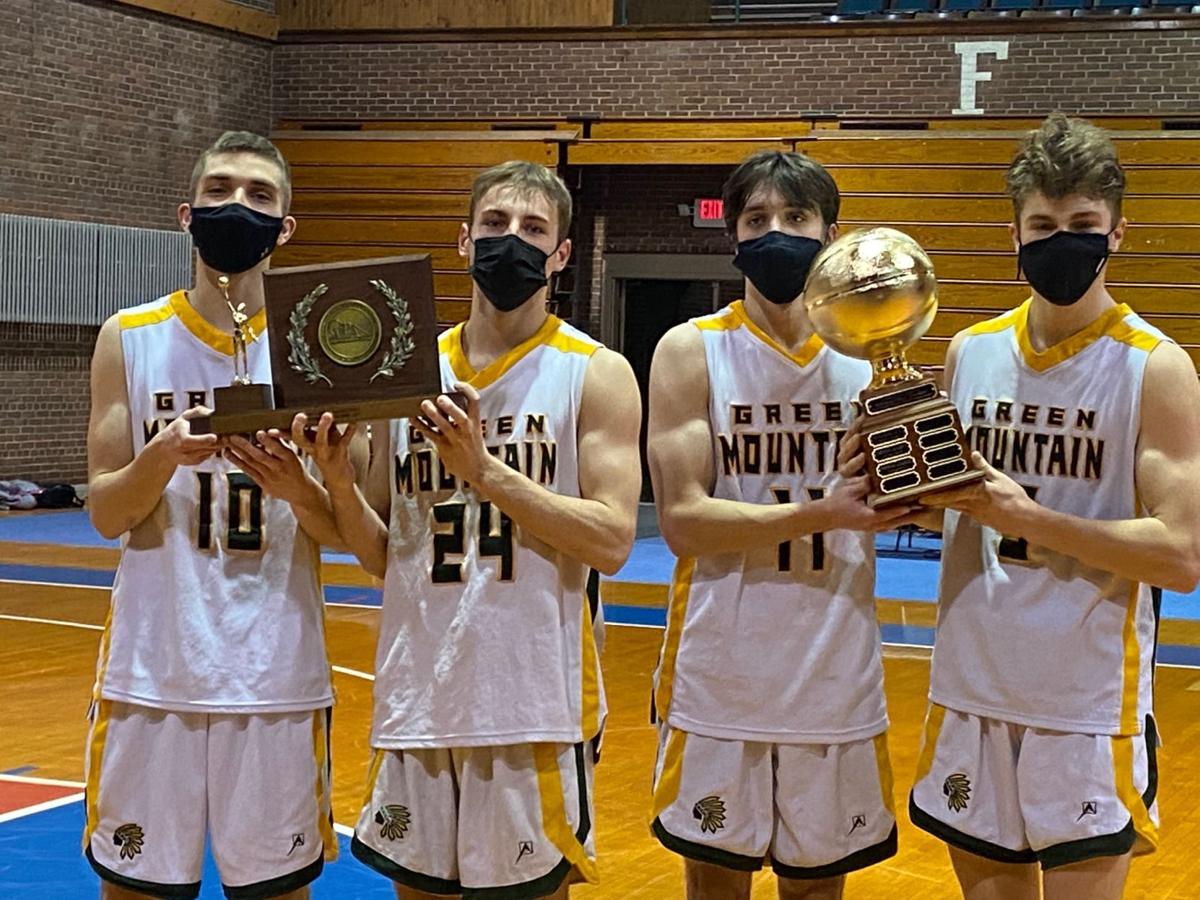 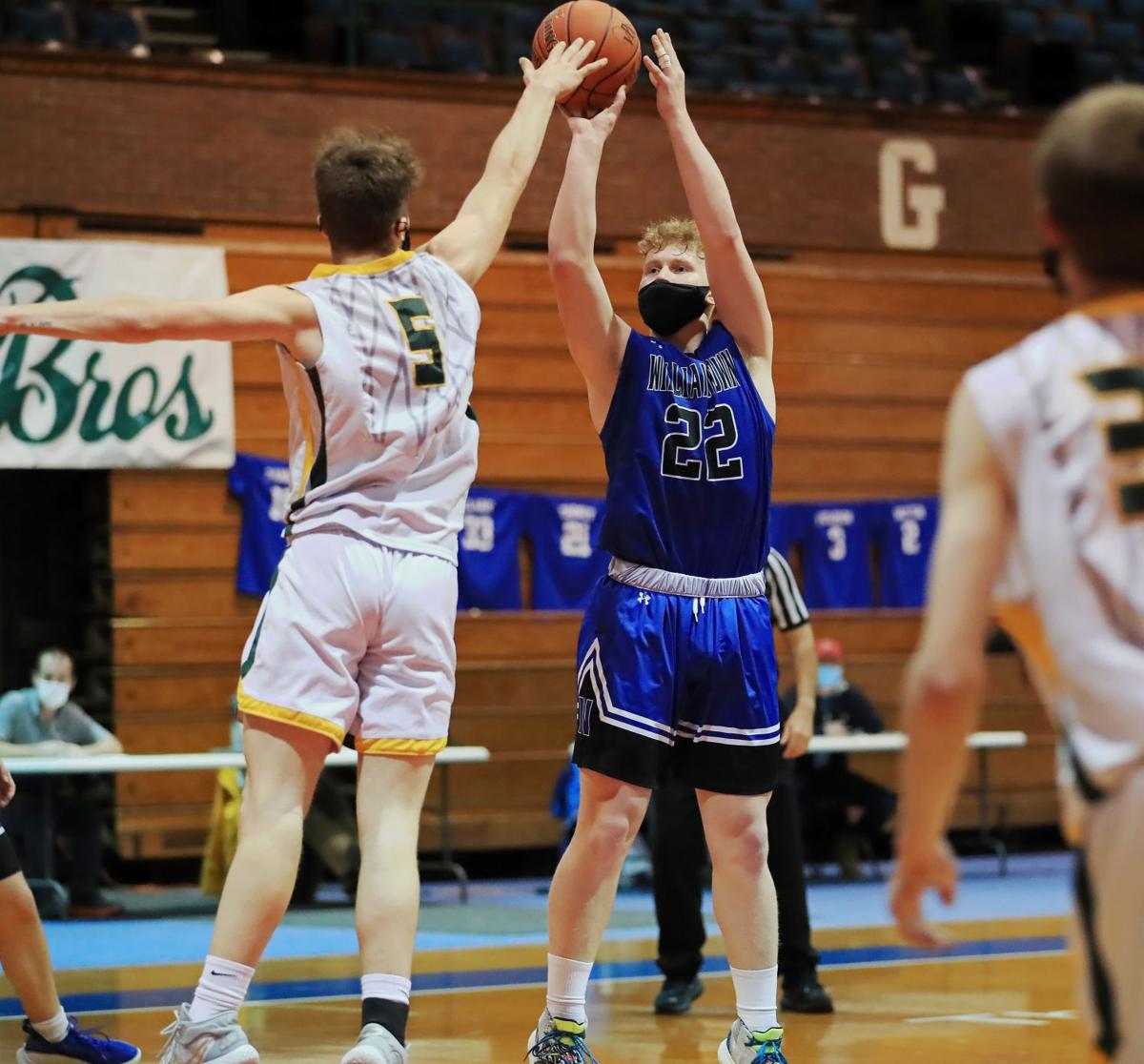 BARRE, Vt. — It was the perennial power against the team seeking its first boys basketball state championship. Green Mountain and Williamstown played every possession as though it meant everything because it did. Green Mountain rode back to Chester with the program’s first title after a grinding 52-51 overtime victory on Sunday night at Barre Auditorium.

In every overtime game that comes down to the buzzer, you could make a case for dozens of plays being the turning point. One, in particular, stood out in the overtime.

There was 1:02 remaining in the overtime when Green Mountain coach Brian Rapanotti took a timeout with his Chieftains clinging to a 50-49 lead.

It appeared they might be taking the air out of the ball when Jack Boyle pivoted and took the ball hard to the hole. His layup cushioned the lead to three with 23 seconds remaining.

“I thought they might attack if they got the ball on the high post so it did not surprise me totally,” Williamstown coach Jack Carrier said. “I am surprised we let him do it.”

But people have had problems stopping GM’s big man all season. He had 17 points and 12 rebounds but no bucket was bigger than the last one.

Williamstown’s James DeForge scored on a putback to account for the final score.

One baseball pass down the floor later, the final horn sounded and the Chieftains were in a pig pile at midcourt, wildly celebrating something no other boys basketball team had ever been able to celebrate at their school.

“I think that was a very good veteran move on Jack’s part,” Rapanotti said of his senior center.

“It was open to the basket so I took advantage of it,” Boyle said.

Boyle’s play was pivotal but everyone contributed for the Chiefs, late-season find Branden Rose as much as anyone.

Rose nailed a 3-point field goal to open the overtime and got the Chiefs to the extra session with his steal.

Boyle was injured in GM’s only loss of the season to Bellows Falls and Rose got some time on the floor he might not have otherwise. He became an important cog in the machine through the playoffs.

Rapanotti, taking in the jubilation of his players on the Barre Aud floor Sunday night, reflected on that loss to Bellows Falls in the last regular season game and felt it might not have been a bad thing.

“I think it allowed us to refocus and we found Branden,” he said.

Rose’s overtime contributions were made all the more important by the fact that the Chiefs had to play it without starters Ty Merrill and Skyler Klezos who had fouled out.

The tone was set early with the Chieftains and Blue Devils both getting after it on defense during a 7-6 opening quarter won by Green Mountain.

“We talked about staying locked down,” Boyle said of the halftime confab.

Green Mountain got off to a good start after the break. Sawyer Pippin scored off a pretty feed from Boyle and Merrill scored to give the Chiefs the first four points of the half, compelling Carrier to call a timeout.

A corner 3 by Everett Mosher gave Green Mountain a 27-23 lead but the Devils finished the third period with a flurry to take the lead.

A driving layup by Michael Murphy and a trey from Blake Clark sent Williamstown into the fourth quarter with a 28-27 advantage.

Merrill stepped up with a 3-pointer and a 15-foot jumper to get the lead back for Green Mountain, 32-28, but then he fouled out with 1:51 left in regulation time.

Thomas Parrott made three of four free throws in the final minute to help give the Blue Devils a 43-41 lead.

Then, came a play for Green Mountain, that was at least as big as the one made by Boyle. Rose stole the ball, dished it to Klezos who converted the layup with 11 ticks left on the clock to send the game to overtime.

Klezos had one more major contribution before leaving. He scored on a putback to give the Chieftains a 50-48 lead with 1:20 left in the overtime.

That set the stage for Boyle.

Parrott led the Devils with 13 points, Murphy had 11, Brady Donahue added a couple of 3s on the way to eight points and DeForge tossed in six.

Top-seeded Green Mountain finishes with a 12-1 record and No. 6 Williamstown at 8-4.

The Williamstown program is a fixture at The Aud. The Blue Devils were in eight straight state championship games (2012 through 2019) before making their return this season.

But something a little different stamped this team, Carrier said.

“This being such a young team and so inexperienced, that made this special,” Carrier said.

Riley Cheney was the lone senior on the roster.

Carrier pointed to Murphy as someone who galvanized the team down the stretch.

“He good stats but he brought us a lot of energy at a different level,” Carrier said.

The Chester High School Sentinels, the forerunner of Green Mountain, won a title in 1954 and now the Chieftains have earned a trophy to take its place with that one.

The ride back to Chester was a sweet one. Every one of the 92 miles filled with joy.