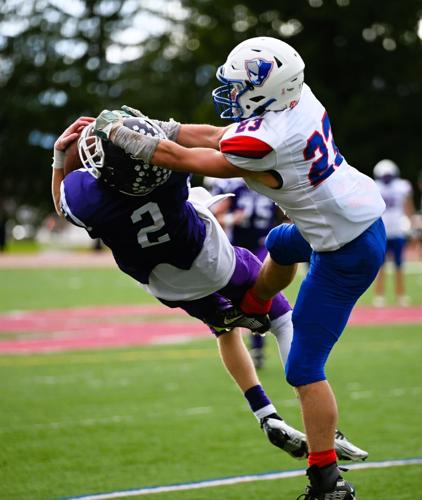 This Jamison Nystrom interception sent the game into overtime for Bellows Falls, only to have their season end with inches of a tying score in the second overtime. 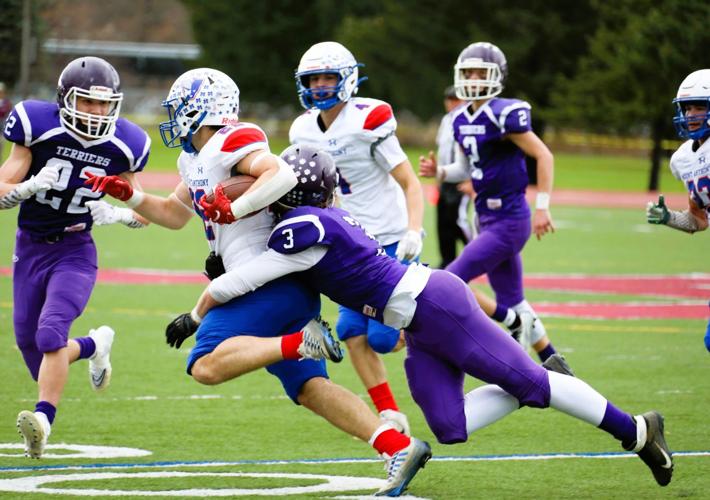 The Terriers Cole Moore has Mt. Anthony’s Ayman Naser wrapped up on this play.

This Jamison Nystrom interception sent the game into overtime for Bellows Falls, only to have their season end with inches of a tying score in the second overtime.

The Terriers Cole Moore has Mt. Anthony’s Ayman Naser wrapped up on this play.

RUTLAND, Vt. — The Terriers season came to an end with Mount Anthony stopping a run near the goal line in the second overtime by only a few inches, giving the Patriots their first championship since 1994, handing a heartbreaking 24-17 loss to Bellows Falls. The last play of the game was so close, the referees got together and talked to make sure they had the call right before declaring the run short of the end zone.

The game was one of the most exciting games in Vermont playoff history, as it needed a second overtime to crown a champion. Mount Anthony tied the game late in the fourth quarter, then teams headed to the 10-yard line for a four play series. Jamison put Bellows Falls ahead with a 30-yard field goal, then the Patriots matched that off the foot of Luke Bleau sending it into another overtime.

Mount Anthony decided to take the ball first and found paydirt, putting all the pressure on the Terriers to score. After three plays, the Terriers were sitting inside the one-yard line, but their attempt was denied at the two-inch line, ending the Terriers dreams of an undefeated season.

“I wanted this so bad, I couldn’t even eat breakfast, my stomach was flipping,” said Caden Haskell.

Bellows Falls led early thanks to a Jamison Nystrom pass to Walker James, but the Patriots came back to tie the game 7-7 early in the second quarter. Haskell put the Terriers ahead 14-7 at the half, putting the Terriers’ confidence high. “There is no place I’d rather be than right here today,” said Jake Moore.

Eli Allbee’s interception stopped a Patriot drive, then a Nystrom punt of 65 yards pinned Mount Anthony deep as the Terrier defense was making all the right plays. With time winding down, Mount Anthony resorted to a trick play with a pass from a running back that worked to perfection setting up a tying touchdown with time running out. Mount Anthony looked to end the game in regulation, but a spectacular Nystrom interception snuffed out the drive, sending the game into overtime, 14-14.

It’s one thing to lose a game, but the dramatic way this ended so suddenly was tough on the Bellows Falls players who were in disbelief and the emotions poured out. “We gave it our best, we have such a great team, it’s horrible to have it end this way,” said Nystrom.

“This team played with class not only today but all season. There isn’t much to say except how proud I am to be their coach,” said Bellows Falls Head Coach Bob Lockerby.

As Mount Anthony gathered with their fans to celebrate, Ayman Nasser noticed Haskell walking off the field and went over to him. Their hug lasted for a long time as their families gathered around the players who were just battling each other only moments earlier. “We’ve been to camps together, he is my friend,” said Nasser, “I have the most respect for Caden and the entire BF team, they are incredible.”

There are times when sports and winning is the most important thing, but to see these two young men show that there is more to a game than winning, it’s about friendships and respect. A great way to close out a season.