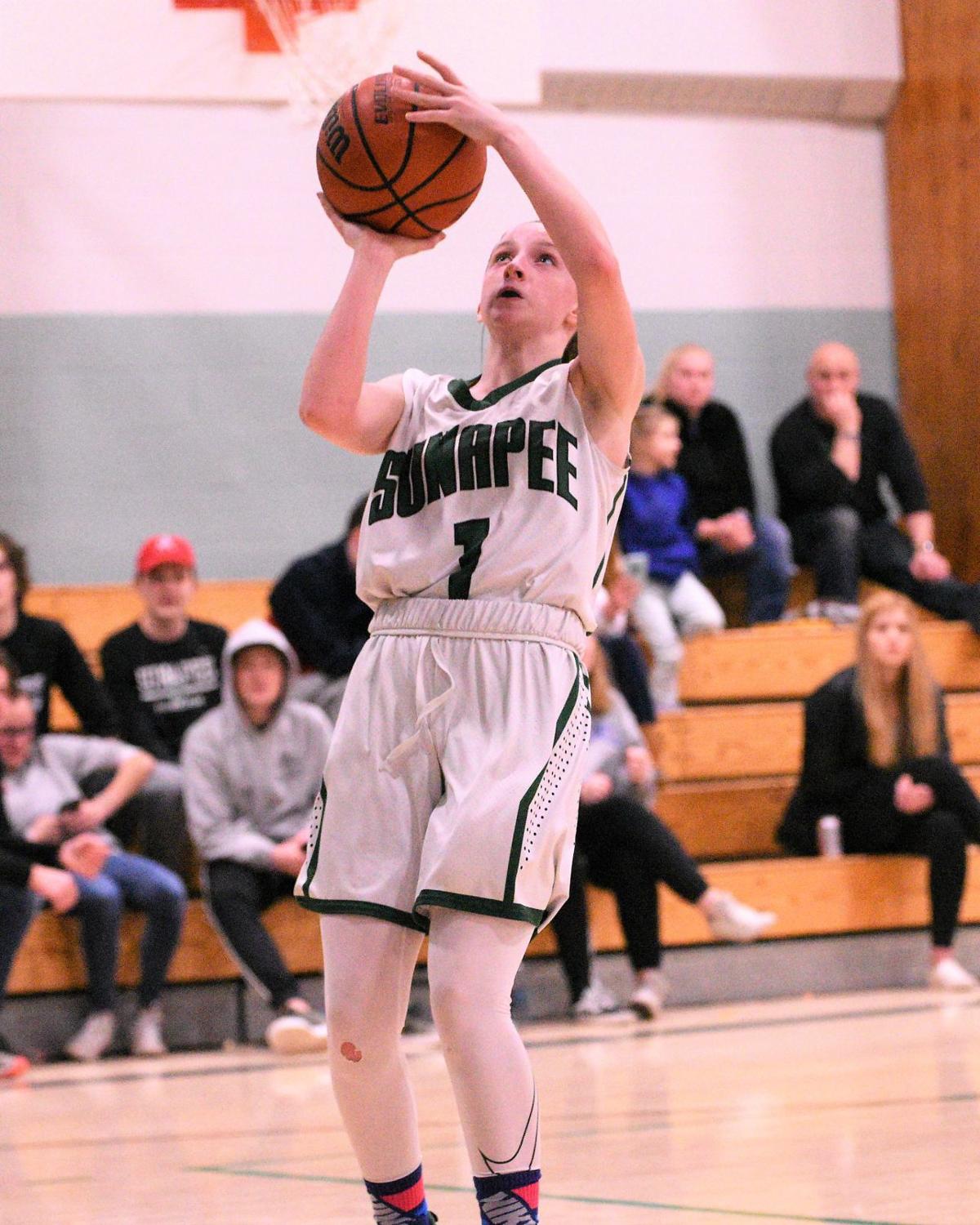 The Lakers Carissa Pierce has her eye on the hoop after a steal and this layup brought Sunapee within one point. Pierce would moments later hit a three-point shot to give her team a come-from-behind 38-36 win in dramatic fashion. 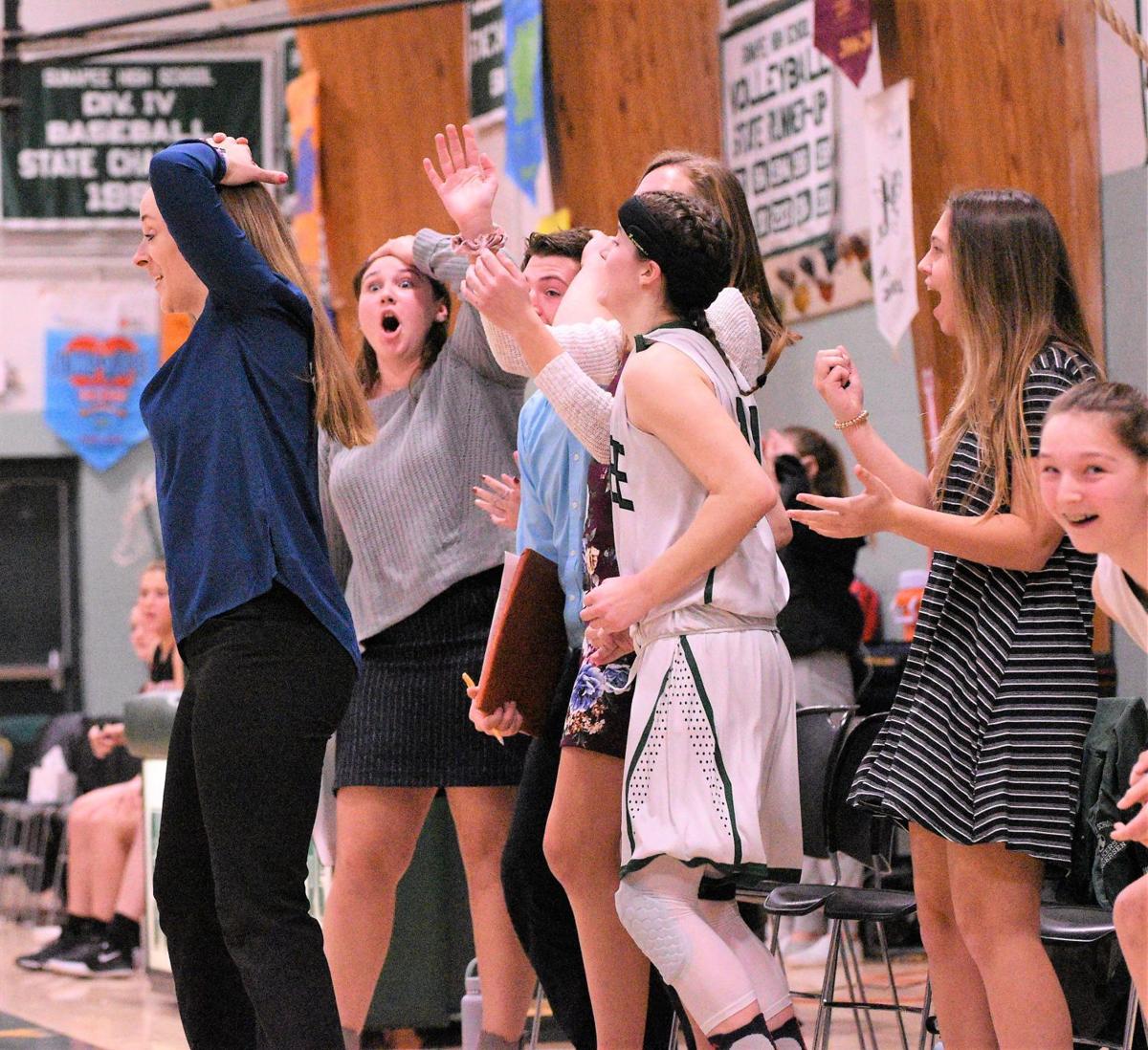 The Sunapee bench reacts after an acrobatic shot by Carissa Pierce went in to give the Lakers a heartstopping 38-36 win on Monday.

The Lakers Carissa Pierce has her eye on the hoop after a steal and this layup brought Sunapee within one point. Pierce would moments later hit a three-point shot to give her team a come-from-behind 38-36 win in dramatic fashion.

The Sunapee bench reacts after an acrobatic shot by Carissa Pierce went in to give the Lakers a heartstopping 38-36 win on Monday.

Sunapee — With Sunapee trailing by 3 points late in the game, an acrobatic three-point shot was the difference as the Lakers came from behind to beat a very pesky Panther squad on Monday night.

Sunapee seemingly had things in control early as they jumped out to a 14-7 lead on the shoulders of Miah Hamm as she controlled the paint both on offense and defense for Stephanie Larpenter’s squad. Moltonborough found their game and played even with Sunapee during the second period but came out with a full-court press and grabbed the lead with an 8-0 run to start the third quarter 23-22.

“It was just one of those nights where our outside shots just didn’t fall and we were turning the ball over way too much,” said Larpenter. Carissa Pierce stopped the bleeding for Sunapee with a nifty reverse layup to give the advantage back to the Lakers as the lead went back and forth for a bit.

Sunapee ended the third quarter with a 6-0 run to grab the momentum back as Liz Tschudin canned both of her free throws, Abi Pollari found net and Anah Durkee finished things off with a bucket to give Sunapee a 30-25 lead heading into the final quarter.

“We have had a tough stretch and tonight was another example of us learning how to win those close games,” said Panther coach Matt Swedberg.

Moltonborough refused to lie down and with Katie Velle’s old fashioned three point play, the visitors had grabbed the lead back 32-31 with 4 minutes remaining.

Tschudin would respond for Sunapee to put the Lakers back in the lead but Vellie would score from under the hoop for a 34-33 Panther lead and then stole the ball at half court and scampered in for a layup putting Sunapee in a 36-33 hole with barely a minute left.

After a Sunapee miss, the Panthers were headed up the court looking to finish Sunapee off but a blindsided steal from Pierce and layup had the locals on their feet as Sunapee trailed by a single point, 36-35 with 30 seconds left.

In the frantic next few seconds, a Moultonborough turnover gave Sunapee the ball back as Larpenter called a timeout to set up a final shot for the Lakers.

“We were only down by a point so I really wanted to get to the rim but it didn’t work out that way,” said Larpenter.

A tough Panther defense pushed the ball away from the basket and Pierce dribbled the ball around the arc looking for an opening to the hoop. “There was nothing there and time was winding down so, I took the shot” said Pierce. That shot was around a wall of defenders and with one hand that found nothing but net as the crowd went wild giving Sunapee a 38-36 lead that would hold up as the visitors didn’t get a shot off over the last few seconds. “I’ve done it so many times practicing that shot with my dad, it was just instinct,” said Pierce after the game.

Pierce would lead Sunapee with 10 points, Hamm would drop in 6 points all in the first quarter and Tschudin would add 5 points. Moultonborough’s freshman sharpshooter Vellie would lead everyone tonight with 15 points.

In JV action it was the Sunapee boys defeating Moltonborough 66-24. Drew Clifton led the way with 20 points while Austin Tschudin would end the night with 13 points of his own.