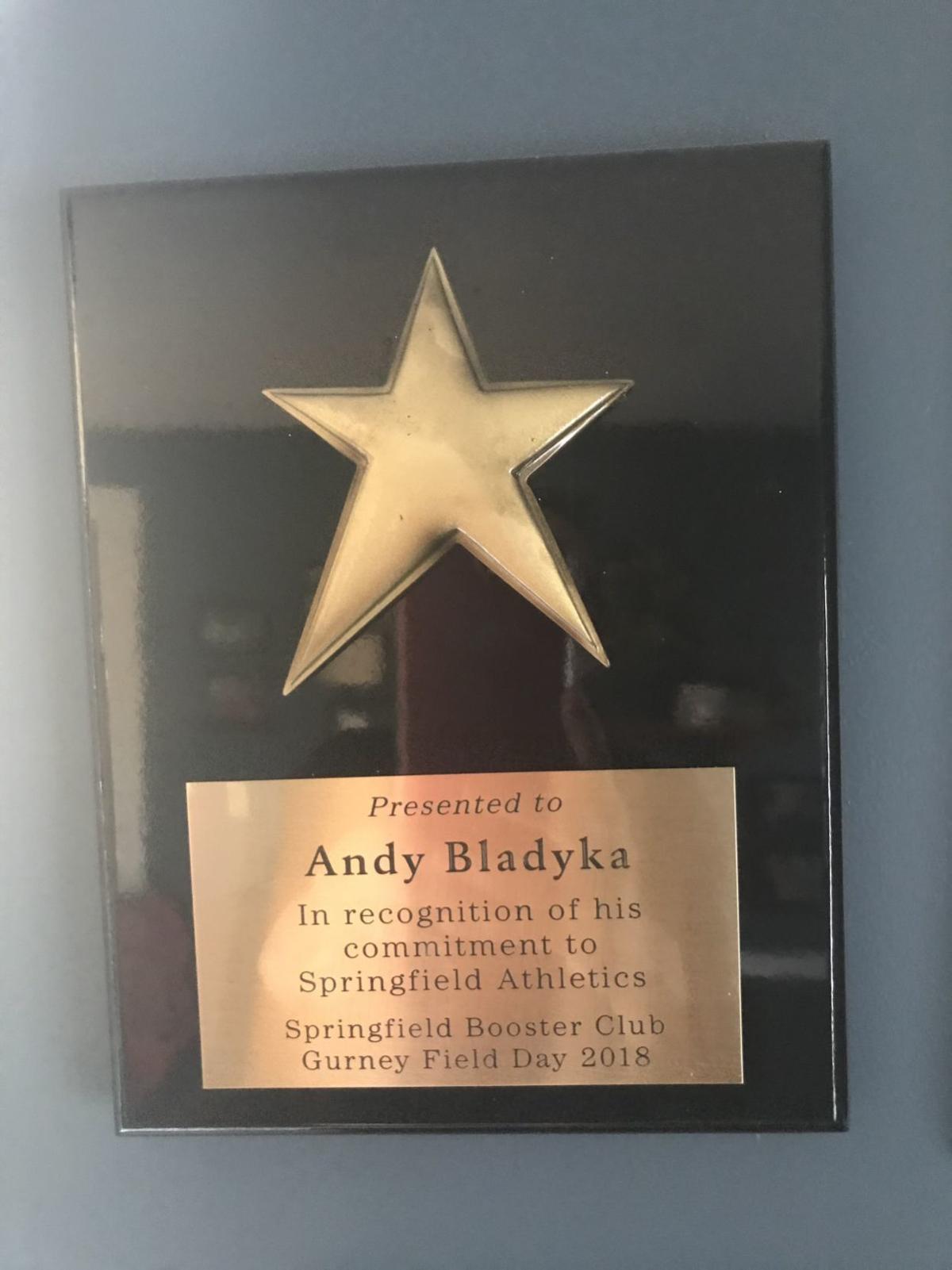 The plaque Andy Bladyka received in 2018 for his commitment to Springfield athletics. 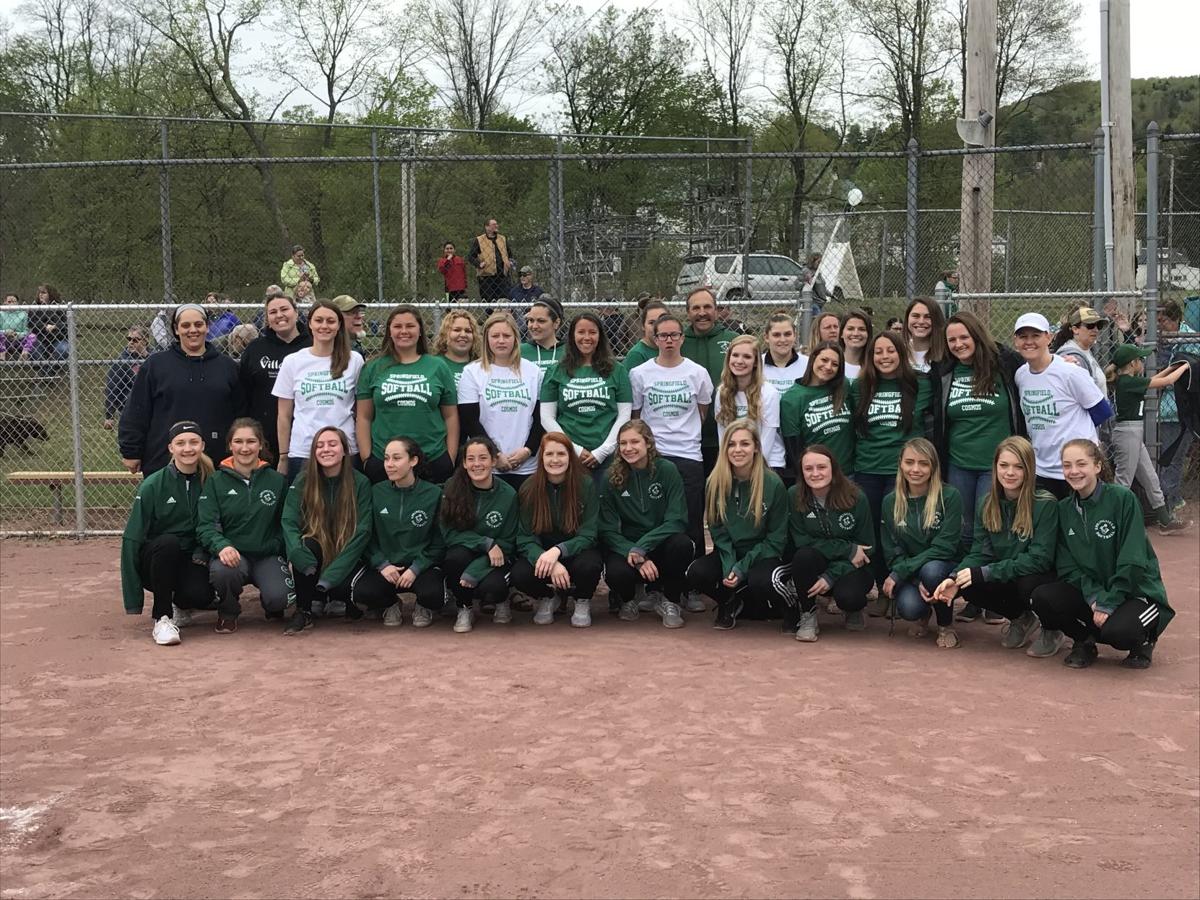 The plaque Andy Bladyka received in 2018 for his commitment to Springfield athletics.

Andy Bladyka figures he has seen his Springfield varsity softball teams win 227 games during his 21 seasons as the coach.

But it’s the journey that has been most interesting. It has not been your ordinary path that has led him to coaching high school softball and serving as the director of the recreation department in his hometown.

Bladyka took six years off after graduating from Springfield High School in 1977.

He did his share of partying while living in a an apartment in Chester with his girlfriend. But he did work full time at Green Mountain Log Cabins, a firm that no longer exists.

He was the head of the manufacturing shop, running a big saw.

“I had a lot of people telling me that I was capable of much more. One day I woke up and decided I was going to college,” Bladyka said.

He went over to Springfield High School and inquired if they would still have transcripts for a 23-year-old former student.

They did. Those transcripts revealed something about Bladyka’s high schools years. Administrator Leon “Pops” Perry examined Bladyka’s grades and his SAT scores and said they could not possibly belong to the same person.

The SAT scores were really good. The grades, really bad.

Bladyka was preoccupied with sports in school but did not put much importance on his classroom performance.

“I put the pieces together and went to the admissions office at Castleton,” Bladyka said.

He was not comfortable walking into that office, feeling totally out of his element.

That is until he saw that the admissions person happened to be Kim Abbott, a Springfield native and the future Mrs. Stan Van Gundy.

Van Gundy was a 24-year-old coaching the Castleton men’s basketball team and that, of course, was only the beginning. He eventually went on to an NBA coaching career after his three years at Castleton where the Spartans went 68-18. He won 523 games with the Miami Heat, Orlando Magic and Detroit Pistons.

Castleton coach Jim Thieser wanted Bladyka to be the backup soccer goalie to Bryan DeLoatch, one of the greatest athletes in Castleton history, for a year and then slide into the net when DeLoatch graduated.

Bladyka was watching fall baseball practice from the soccer field and began yearning for the diamond.

“I was much more passionate about baseball,” Bladyka said.

Thieser was also the baseball coach and Bladyka wound up playing four years of baseball for the Spartans before graduating in 1988.

The freshman year was tough. The Spartans were in Virginia Beach when the call came that his father had died.

But the years at Castleton were good ones after that. A physical education major, Bladyka did his work study for that department. Van Gundy was in charge of the work study program one of those years and Bladyka would do things like lining fields or running lines for field hockey games.

His days at Castleton prepared him well. He has a job he enjoys in running the town recreation department and he has won many more games than he has lost (227-147) at the helm of the Cosmos softball team.

Last year was to be his last. Twenty-one years had been enough, so he thought.

But they were having a difficult time finding a replacement. Springfield Athletic Director Rich Saypack came to the Springfield Community Center one day to try to persuade Bladyka to stay on at least another year.

Bladyka relented providing he could have his assistant coach Mike Langdon with him. Langdon had been at Bladyka’s side for all but three of the 21 years. He had not been there the last two.

Bladyka and Langdon were set to coach together for the 2020 season but now the COVID-19 virus has made that plan uncertain.

The Vermont Principals’ Association has set a tentative date of April 6 for spring sports practices but nobody knows if that will actually happen. Softball and all the other high school spring sports seasons are enveloped in uncertainty.

Bladyka is in the middle of much of what Springfield is dealing with in his position as recreation director.

The recreation department, like the schools and so many other institutions, is shut down so he was constructing guidelines on Wednesday concerning the use of the outdoor fields.

The Springfield spring coaches had a meeting on their phones and computers this week at home with Saypack.

Saypack does a daily show at 11 a.m. for the school’s athletes in an effort to keep everyone connected.

“We also have a great sports booster club in Springfield right now with Rachel Hunter as its president. They are doing things on Facebook by having the kids show them what they doing to stay in shape. It’s all good stuff,” Bladyka said.

He knows his softball players are dealing with a lot of disappointment.

“We potentially have six seniors and a lot of them would be four-year varsity players. It’s so tough. The kids are obviously down,” he said.

Springfield has an interim town manager at this time. Steve Neratko is due in town on April 1, so everyone is doing their best to provide leadership in the meantime.

There are lunches being made for the students who can pick them up at different parks in the town.

“We are all just trying to keep the kids doing the right thing,” Bladyka said.

It was in 2008 that Bladyka received a plaque in recognition of his commitment to Springfield athletics.

These days that commitment is being stretched to boundaries we have not known.