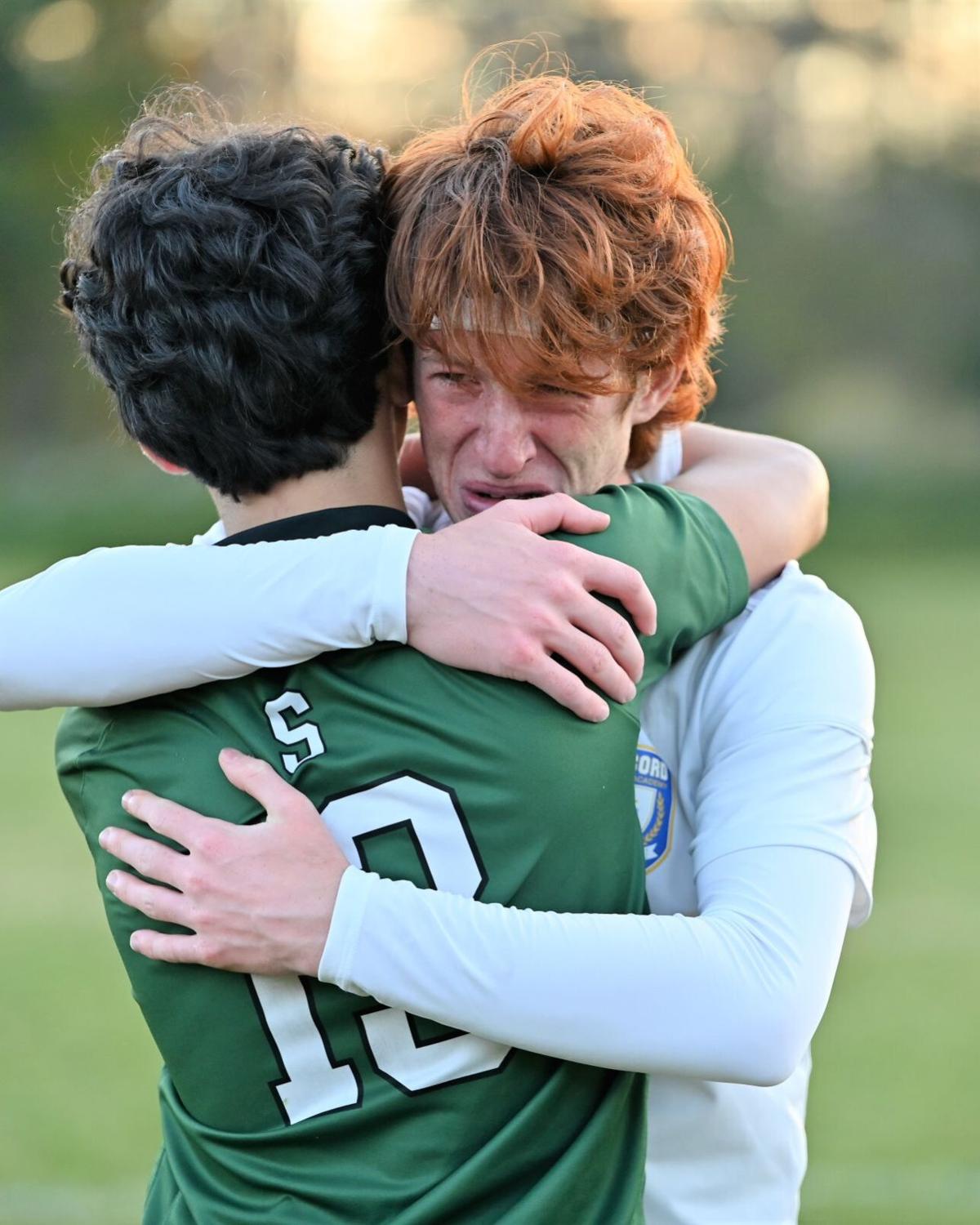 In a moment of true sportsmanship, a Sunapee player consoles a competitor after a playoff game. 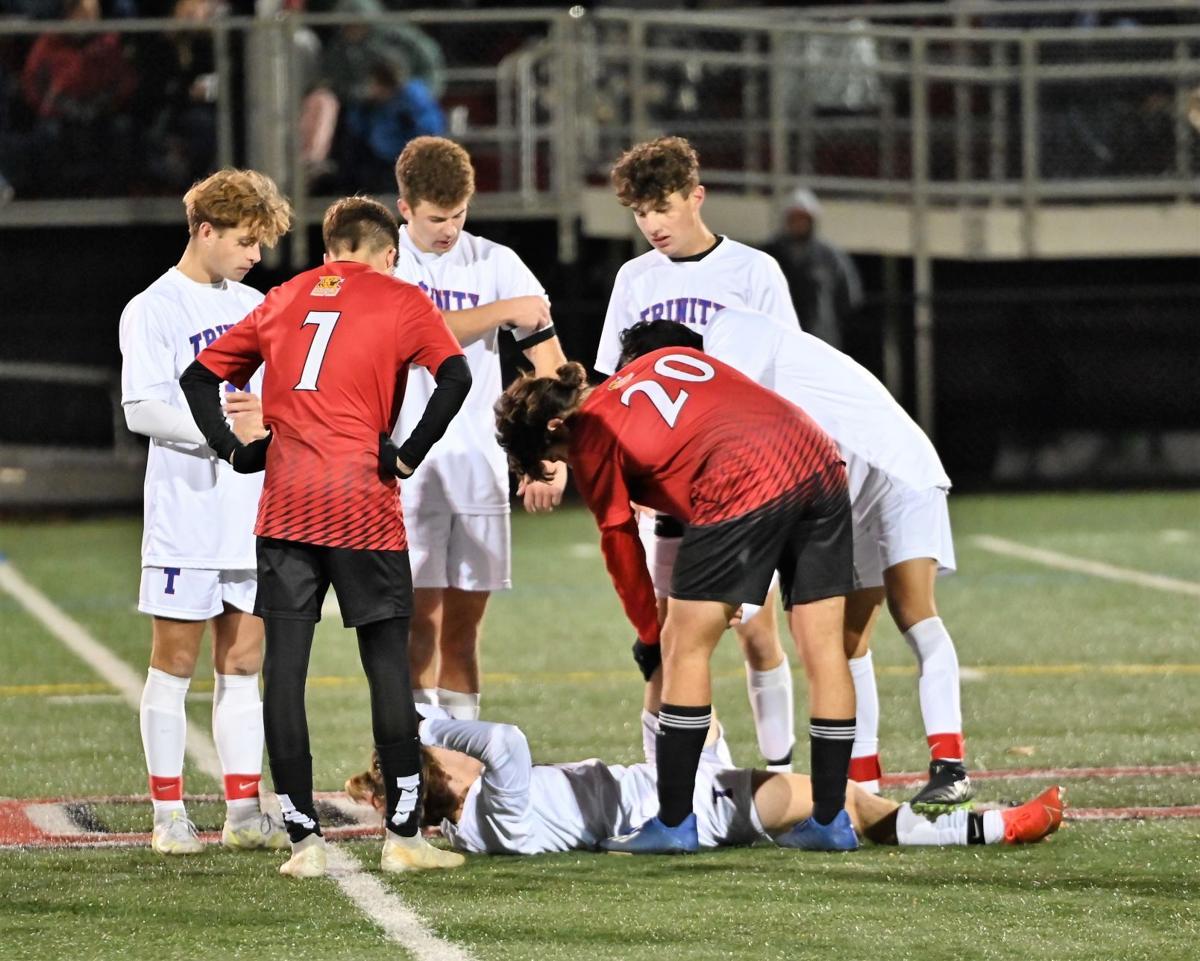 A Campbell player attends to a fallen Trinity player during a championship match. 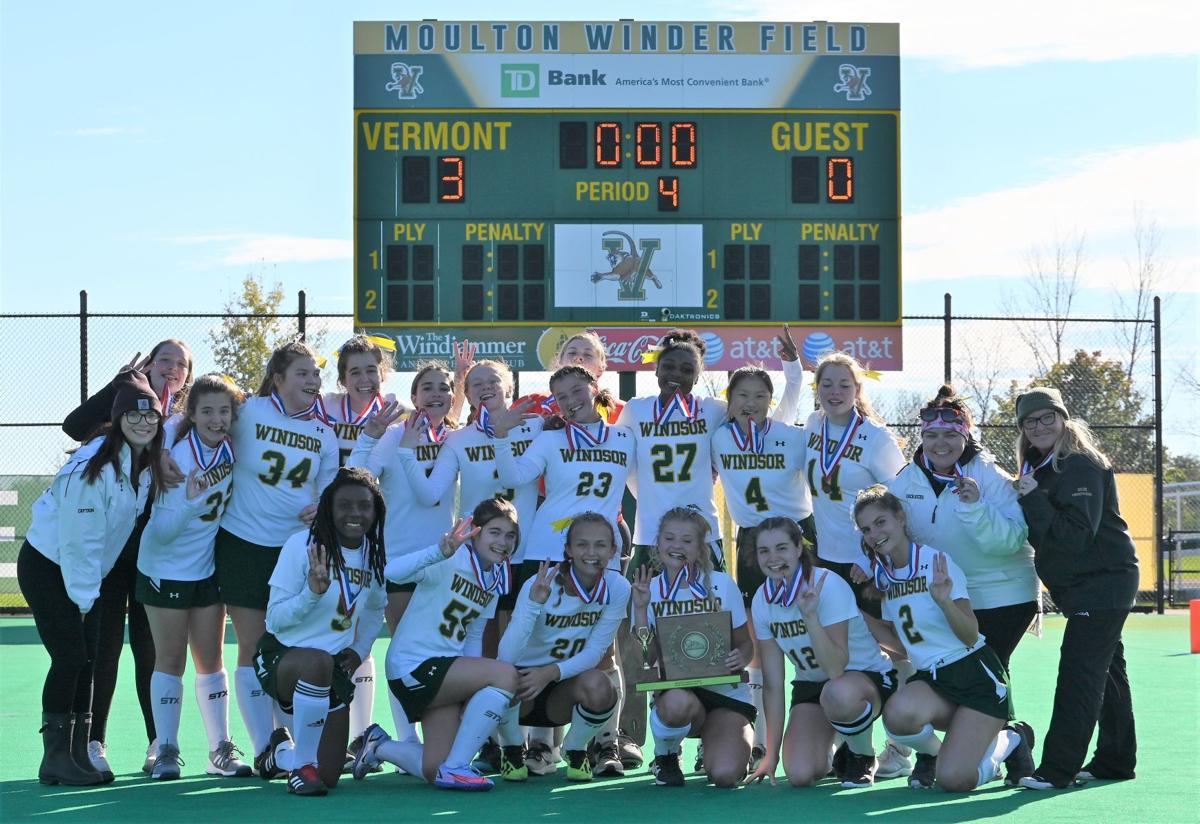 The No. 1 seeded Windsor Yellow Jackets defeated the No. 2 seeded Lyndon Institute Vikings in the Vermont Division III field hockey championship at the University of Vermont. 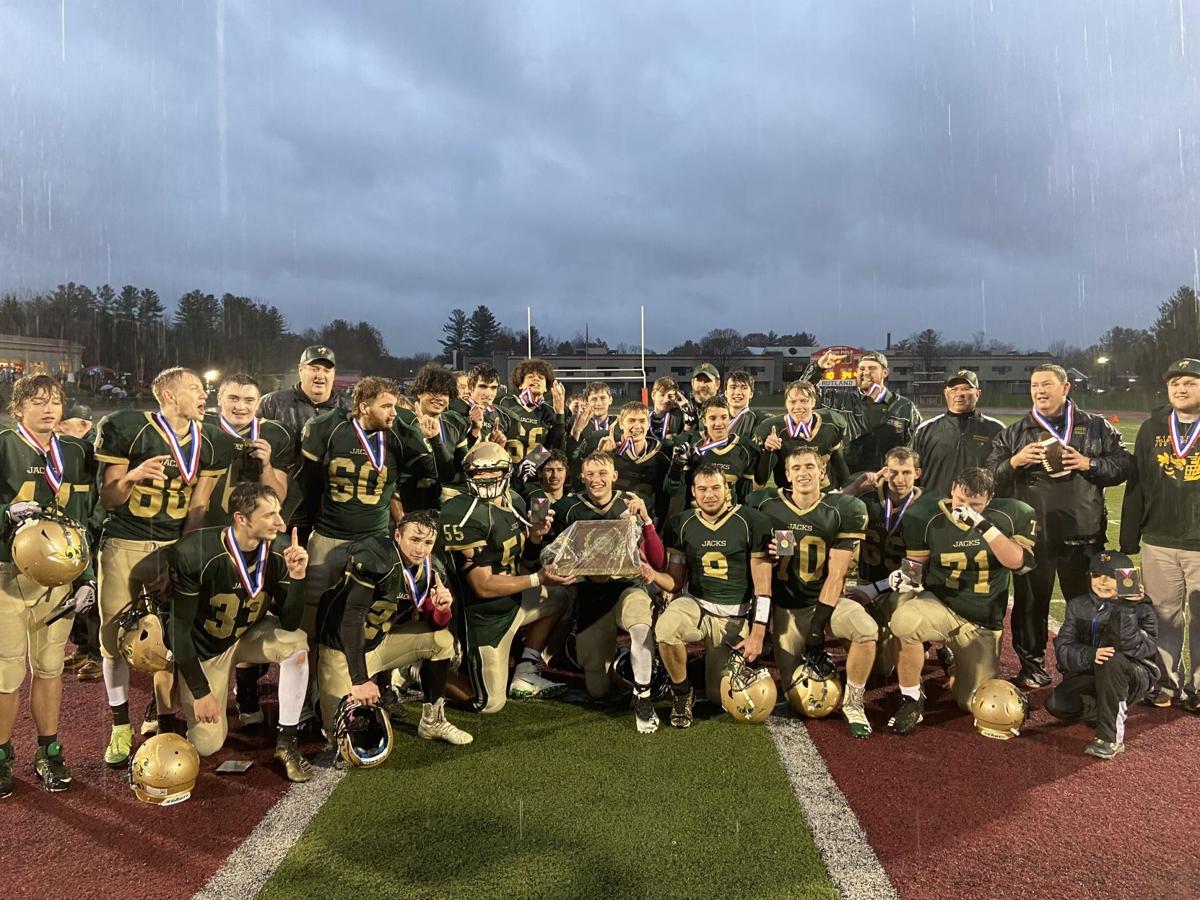 The Windsor football team poses for a picture after beating BFA-Fairfax/Lamoille to win the Division III state championship at Alumni Field in Rutland, Vt. 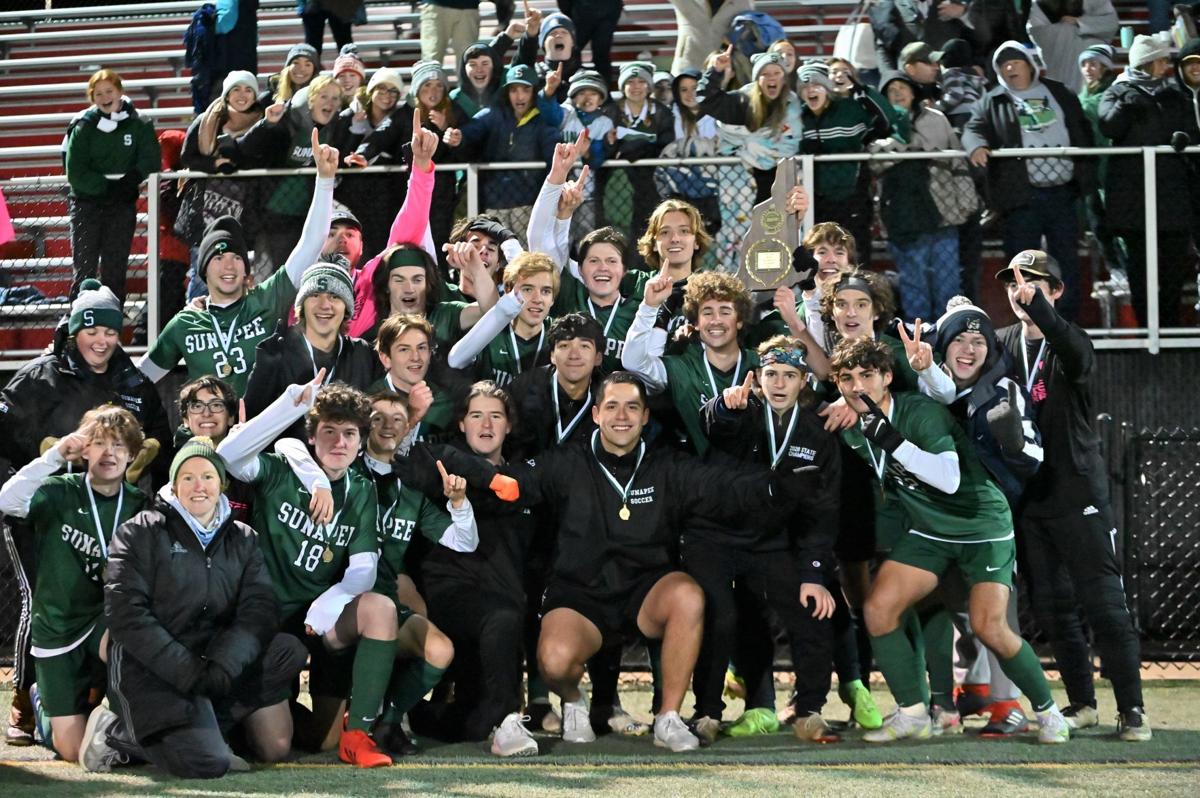 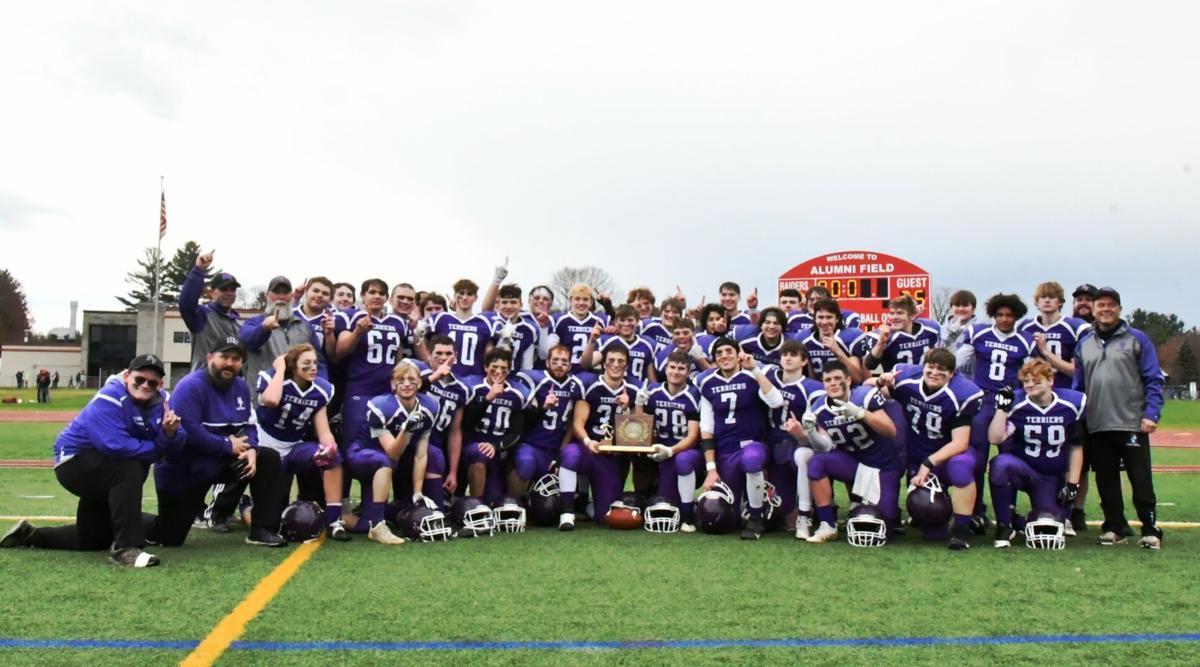 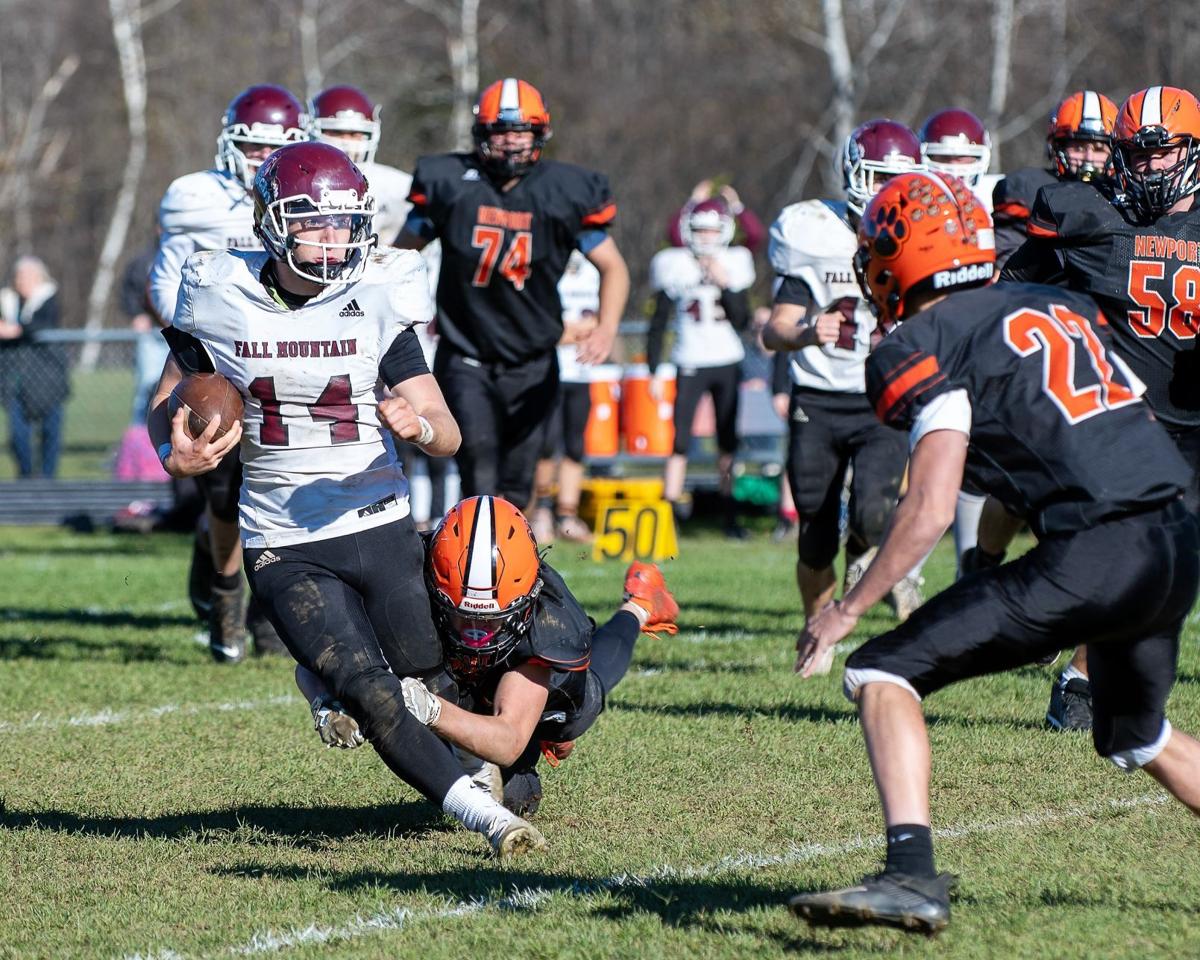 In a moment of true sportsmanship, a Sunapee player consoles a competitor after a playoff game.

A Campbell player attends to a fallen Trinity player during a championship match.

The No. 1 seeded Windsor Yellow Jackets defeated the No. 2 seeded Lyndon Institute Vikings in the Vermont Division III field hockey championship at the University of Vermont.

The Windsor football team poses for a picture after beating BFA-Fairfax/Lamoille to win the Division III state championship at Alumni Field in Rutland, Vt.

CLAREMONT — What a year it has been. We have gone from a time with no fans allowed at some events to stadiums packed with people cheering on their teams for state championships.

What will we remember the most about the last year?

There were some incredibly unforgettable moments that took place with four of our local teams winning state championships.

Windsor as locals refer to as “title town” grabbed championships in football and field hockey while Bellows Falls football finished off an incredible year with some championship hardware and in Sunapee, the Lakers boys soccer team won their third title in four years. Fall Mountain football, Bellows Falls field hockey, and the Green Mountain boys soccer team made the trip to the finals but came away just short as there were many teams that would have loved to be in their shoes to get that chance.

Let’s not forget about Patty Deschaine’s Stevens field hockey team that made it all the way to the semi-finals with at times only nine players on the field and the 50th annual Bernard Cup was just incredible with the move back to Barnes Park in Claremont.

There is nothing quite like a game under the lights in Springfield or having an American flag hanging above the field in Bellows Falls while students at Stevens brought out couches to line the field as community spirit was alive and well across out region.

One of the most memorable moments for me took place at a New Hampshire boys championship soccer game. A Trinity player cramped up in overtime crashed to the turf in pain but instead of trainers running onto the field forcing a substitution, a Campbell player rushed over and began to stretch out the cramp as players from both teams yelled toward the sidelines not to come onto the field. Once a trainer steps on the field, the injured player must come off the field and it was clear that neither team wanted that to happen and after a short time, play resumed with all players still in the game.

David Jimenez offered his hand to Concord Christians Levi Campbell with tears pouring down his face and just embraced the Sunapee player.

“We are soccer players, I just felt for him,” Jimenez said. “We’ve played against each other and we just respect each others teams.”

Green Mountain’s Everett Mosher became only the third boy in Vermont history to blast in 100 goals while Sunapee’s Brynn Smith reached the 100 point plateau as a junior for the lady Lakers. When was the last time we had two local teams finish the season with unbeaten records as both Bob Lockerby of Bellows Falls and Greg Balch of Windsor guided their teams to perfection on the gridiron. Longtime successful Fall Mountain girls soccer coach has walked the sidelines for the last time as Bruce Ferland will hang up his soccer cleats.

Is there a better feeling when you get a police escort back into town with sirens blaring and cars honking their horns like the parade back to Wildcat country or the main street action in Windsor and Bellows Falls, this brings so much pride into the community.

By the way, Campbell eventually lost to Trinity in a shootout.

“We wanted to play against their best, we just did what we thought was right,” said Campbell senior midfielder Eric Coates after the game.