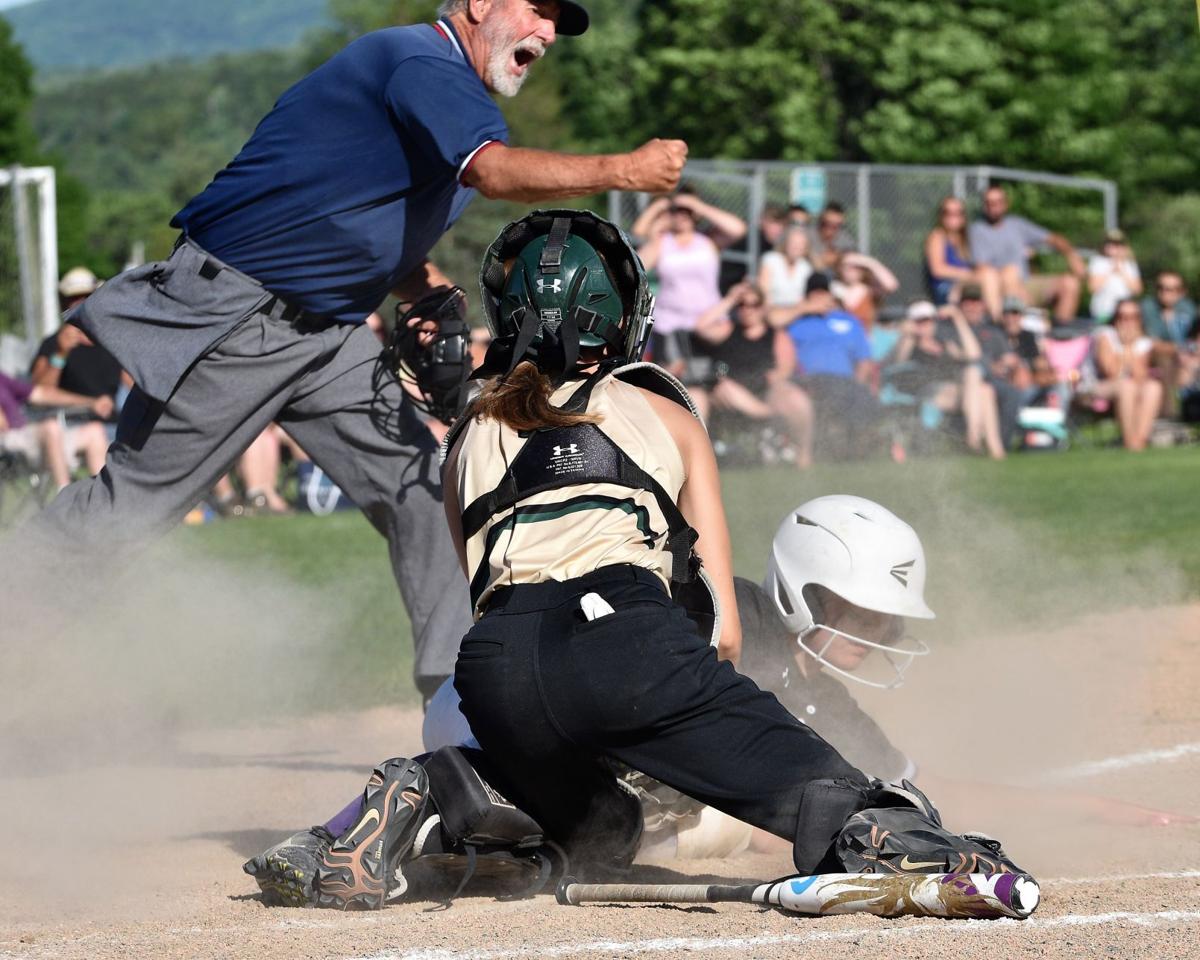 Adi Prior blocks the plate to tag out the Oxbow runner. 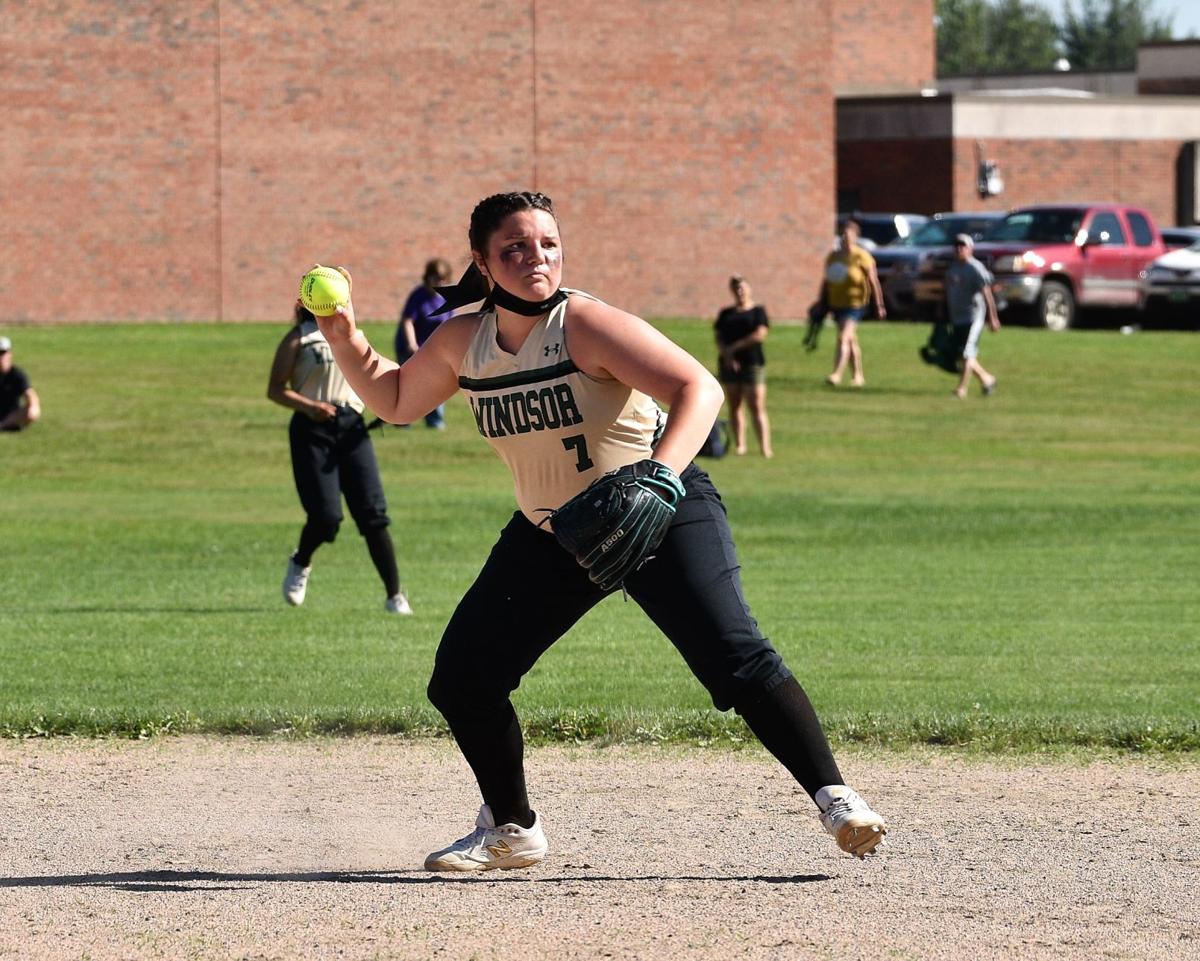 Alyssa Slocum makes a play for an out.

Adi Prior blocks the plate to tag out the Oxbow runner.

Alyssa Slocum makes a play for an out.

BRADFORD, Vt. — An inspired Oxbow team fought off a gritty Windsor squad to punch a ticket to the championship game.

This was not your typical semi-final softball game but looking back at 2020, why would this have been anything but normal?

Illegal pitches being called for the first time all season, player injury and emotions on the faces of the players and fans gave this game some special memories.

With Jacks starter Peyton Richardson being called for illegal pitches right off the bat, the Windsor coaches were on the field quickly trying to find out what the issue was as the infielders gathered near their pitcher. After a few moments of discussion, Oxbow had the advantage with a shaken Richardson in the circle trying to adjust her motion. Aspen Longmoore hammered a two-run home run to give Oxbow a quick 2-0 lead but the junior settled down and closed out the inning with no further damage.

Windsor would come battling back when Paige Kleefish would singe and score then Mya Harriman would tie things up for Windsor, 2-2 on a wild pitch. After Oxbow took the lead again, Richardson would single and score on a wild pitch to knot things up again. Oxbow eighth-grader Anastase Bourgeois set down the Jacks in order as Oxbow took the lead again 5-3 as the Jacks gifted Oxbow with unearned runs. The Windsor defense was solid for the rest of the day as Evelyn Paige made a nifty catch in left and Meagan Holling made a circus catch in right to keep the game close while Alyssa Slocum and Hannah Wood were making all the right plays in the dirt. Adi Prior was her usual rock behind the plate as she blocked the plate to snuff out another would be run under a cloud of dust.

The Jacks weren’t alone with solid defense as the Olympians would use their gloves to snuff a Windsor rally when Emma DeGoosh make a beautiful shoe string catch from her second base position to shut the door and keep the score 5-3. With a hot day on tap in Bradford, an Oxbow player collapsed on the field midway into the game as coaches from both teams rushed to her aid. Her teammates were clearly shaken with many players visibly in tears. After being carried off the field by her coach, Oxbow regrouped and rode that emotion to grab another run.

“We are going to step on the throttle right now,” Oxbow coach Chuck Simmons said to his team in a circle before the game resumed as the Olympians tried to gather themselves.

Faith Eastman took the first pitch and blasted it to deep right for a home run seemed to be just what Oxbow needed at that moment. Windsor’s Slocum would answer back with a shot to center for a triple and would score but that would be all the runs on the day for Windsor. The Olympians would puss across seven runs and take a 13-4 lead at the end of six innings as the injured player was being driven off in an ambulance. That seemed to give Oxbow and their fans a spark as they seemed to hit everything thrown at them as they were riding an emotional high knowing that their teammate was going to be ok.

“This just wasn’t our day today,” said Windsor coach Heather Stearns. “We had a great season and exceeded everything I thought was possible. To say I’m proud of this group would be an understatement.”

“We gave everything we had,” said coach Phil Hathorne after the game.

Bourgeois would close out he season on Windsor as Oxbow finished with a 13-4 win and will face BFA Fairfax for the Division 3 championship.